END_OF_DOCUMENT_TOKEN_TO_BE_REPLACED

SO HOW ABOUT that Fed then? says Dan Denning in Melbourne for the Daily Reckoning Australia.

The US central bank's carrying on with its wayward monetary policy. And it's carrying on with the carry trade – inviting hedge funds to borrow dollars, sell them, and invest the cah elsewhere – by keeping short-term rates at virtually zero.

In deciding to make hardly any changes to its interest rate policy or even the language from its last statement, the Fed is encouraging traders to push ahead with this speculation. For now, it looks safe to borrow in low-yielding currencies like the US Dollar and invest in higher-yielding assets like the Australian Dollar, emerging market stocks and even some bonds.

It's hard to believe the Fed is willfully stupid. But the market, through the price of gold, has clearly communicated that it thinks US monetary and fiscal policy is lousy. Yet rather than defend the US Dollar – indeed the integrity of US monetary policy itself – the Fed is choosing to support asset prices through easy credit.

It's also possible that the Fed thinks a weak Dollar will reduce America's trade deficit, boost its export competitiveness, and lead to higher employment. We think this is a pipe dream. And we're not talking about a lead pipe. We're talking opium.

Smoke and mirrors aside, does this mean we were wrong about our call last week for the end of the dollar carry trade? If the US Dollar index rallied, we expected to see a falling Aussie Dollar, falling Aussie stocks, and (even though it's strange) rising US bond prices. All the leveraged risk trades would unwind as short-Dollar traders were forced to  buy back the greenback.

Now what? Is this the all-clear for stock indices to make new highs as traders borrow money and plow it into markets to engineer huge returns for the end-of-year statements to clients? The early returns are inconclusive. The Dow was all over the shop Wednesday, unable to make heads or tails of what the Fed's non-change means. Gold Futures made a new nigh, though. And about that...

Gold is very popular lately. It's not returning our calls anymore. And when we see it in public, all it does is glitter and bask in the glow of so many new found admirers. That makes us very nervous, and perhaps a bit hurt. We stood by it all those years when no one loved it.

We like it all the same, although we're just friends now, with a friendship based on gold's ability to preserve the purchasing power of our wealth, not any inherent beauty it may or may not have. As a practical matter, however, when you enter a position as the asset is making a new high, you usually get hammered.

That's what happens when you go along with the crowd.

It's an axiom that an asset has to make new highs...to make new highs. But it would be nice to Buy Gold on a correction. Perhaps, though, we are seeing a big shift in market psychology with respect to gold. India's purchase of IMF gold is just one sign of that shift.

Another interesting shift – and the result of the events of early 2009 – as Murray Dawes mentioned to Daily Reckoning Australia readers last week, is that gold is decoupling from the US Dollar. Typically, gold gains when the Dollar falls. Murray sent over the chart below to show it. 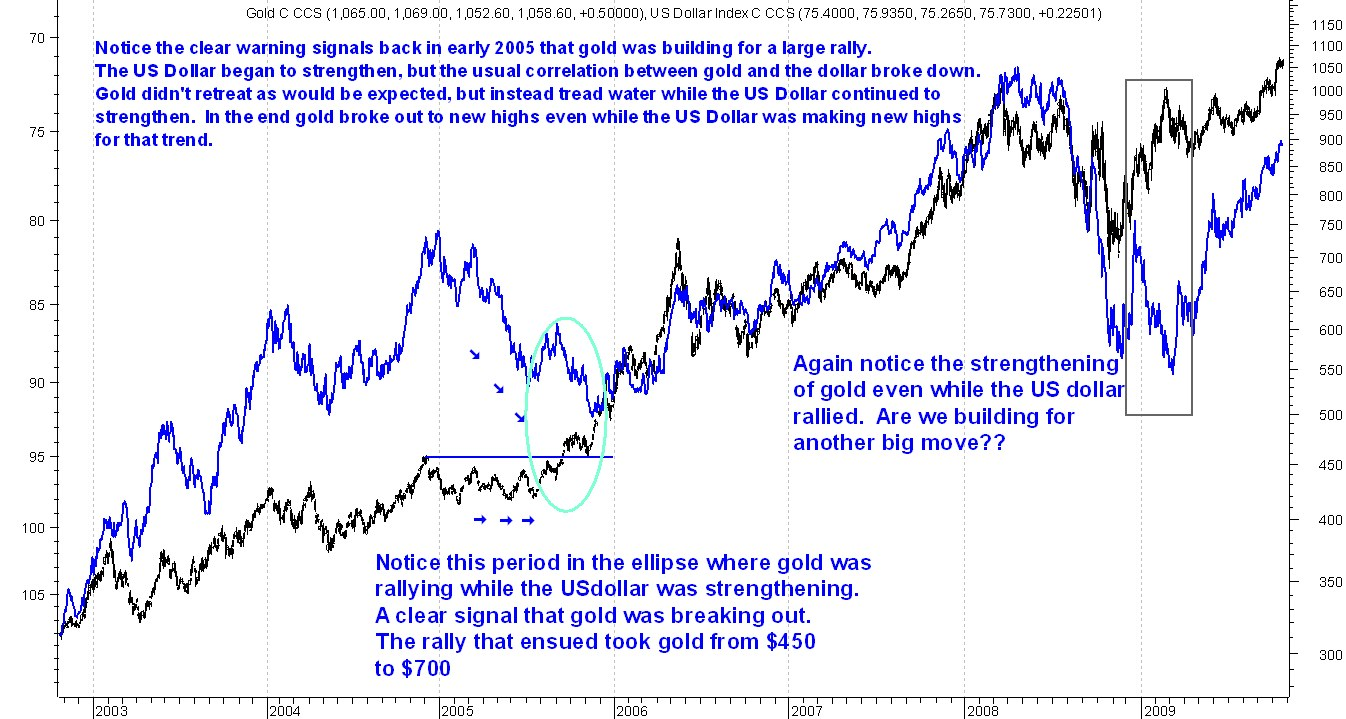 It shows that two times in the last five years, gold (the black line) has strengthened even as the US Dollar index (the blue line, but inverted) rallied. And each time after this period of Dollar strength, gold then took off to a new move up.

Why does that matter? Well, for gold to show strength when the Dollar is strong shows that gold itself may be breaking out of its correlation to the greenback. And what would that tell you?

For traders, Murray is showing that the movement of the US Dollar is what Aussie stocks are keying off of. Thus, knowing where the Dollar is headed tells you whether you should be long or short Aussie stocks (as a trader). Murray is now sorting which stocks specifically are there for the trading (and in which direction). But in the bigger picture, gold breaking its negative correlation with the USD would tell you that gold is being remonetized in the world financial system. It would tell you gold is appreciating against nearly all paper currencies. And it would tell you that even if we do see a US Dollar rally, you could still new highs in the Gold Price. You may also see gold break out in a major way in Australian Dollars.

Above all, it shows you how valuable it is to own an asset that is not anyone else's liability. We are entering a global sovereign debt crisis because the world's large economies have been engaged in a multi-decade long competition to devalue their currencies. The cheaper your currency is relative to your trading partners, the cheaper your goods are and the higher your exports.

Overly the last fifty years, nearly every country in the world has engaged in some kind of currency manipulation to keep its currency cheap relative to the American Dollar. That's because the American economy was the world's largest, and everyone wanted to sell into it.

America's economy is still big, of course. But a lot is changing, while the currency manipulation has not caught up with our new economy reality. Western Welfare states are still borrowing money as if emerging market creditors would be happy to fund fundamentally flawed fiscal policies for ever.

Not likely. But tomorrow is another day.