END_OF_DOCUMENT_TOKEN_TO_BE_REPLACED

Apparently not. But the volatile action threw out some recently long players...

SO DID YOU hear a "pop" yesterday? asks Brad Zigler at Hard Assets Investor.

There's been a lot of jawboning about a bubble in Gold Prices lately. And yesterday, just ahead of the Federal Reserve's much-anticipated statement on QEII, bullion prices sank. But did they pop?

Financial advisers often caution investors about the volatility of commodities. That advice certainly seemed prescient with respect to gold over the past two trading sessions. After a tension-filled week awaiting a Fed announcement outlining the scope of QE2II, metal prices broke $19 lower per ounce on Wednesday, bringing Spot Gold bullion down to the $1337 level.

With the second round of quantitative easing defined – more or less as anticipated, actually – traders and investors adjusted their positions. In fact, some – the very bullish and the undercapitalized – had their positions adjusted for them, thanks to margin calls. A lot of the recently long were tossed from the ranks yesterday, helped by traders anticipating further weakening in bullion. And along with a surge in New York's Comex volume – more than double the previous day's turnover – open interest spiked, the telltale tracks of new short-sellers.

Speaking of open interest, speculative long interest at Comex had actually been waning well ahead of this week's events. Net speculative length in Gold Futures had been shrinking for a month. The total of money managers' net exposure to gold, together with large and small non-institutional traders' positions, fell by more than 26,500 futures contract equivalents, or 8%, after 10 weeks of constant building.

That, coupled with negative money flows in the SPDRs Gold Shares Trust (NYSE Arca: GLD) and some pullout from the trust's vault assets, gave bearish traders ideas. That made some longs very nervous, too.

In October, the trust's Money Flow Index – a volume-weighted metric of capital commitment – peaked and began a precipitous fall even as share prices continued to rise for another two weeks. 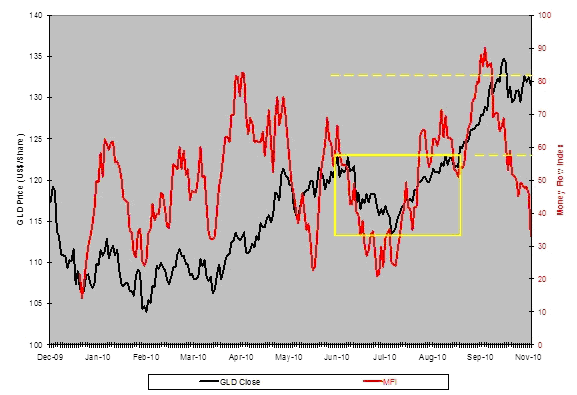 GLD's smart money saw the rise in share prices above the $132 level as overextension, given the depth of the pivot-point turnaround in July. The trust's price, which mimics gold's trajectory, peaked near $135 in mid-October, after a 30% overshoot.

All that is prologue to this morning's market, where bullion, Gold Futures and trust-fund GLD prices have roared back to the upside. At Thursday's Comex open, spot contract prices were $31 higher and traded bullishly from there. GLD shares opened $3 higher, again knocking on the door of the $135 level.

All this seems to be additional justification for the old trading adage, "Sell on the rumor, buy on the fact" and grist for financial advisers' mill.

Ultimately, quantitative easing is bearish for the Dollar, ipso facto bullish for gold. The only question, really, was how much of that notion was baked into Spot Gold bullion and gold proxy prices.

A look at the option market, however, rendered a clue that something was afoot, at least for hedge-savvy investors. The cost of gold insurance – that is, GLD put options – spiked in November, even as the CBOE Gold Volatility Index (CBOE: GVZ) fell. 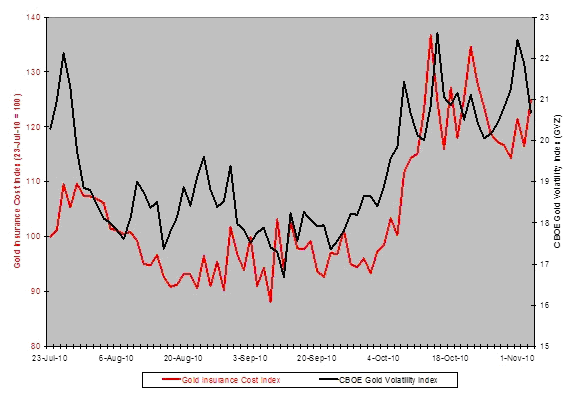 A put purchase affords an asset owner short-term catastrophic price insurance that can be quickly bought and sold. It gives you the right, but not the obligation, to sell at a pre-agreed price in the future if prices fall.

Put buying jumped ahead of Wednesday's QEII news, so somebody was covering their near-term risk. It now seems the insurance was needed for just one trading session, however. Again, "sell – or proxy sell – on the rumor; buy on the fact."

So, was yesterday's market action the long-awaited pop in the gold bubble? Is that all there is? Well, yes and no. Clearly, Wednesday's price decline washed out a lot of weak longs. Then there's the speculative outflow from long Comex Gold Futures and GLD trust shares over the past month. Don't kid yourself, though: Gold still heavily saturates the speculative landscape.

Money managers are still moving to Gold Investing. Heavily investing. At last count, more than 95% of funds' gold positions leaned to the long side. That's a little bit off their peak near 100% in September 2009, but well-recovered from an 89% low in July.

Pullbacks in the strength of money managers' bullish tilt is, in fact, healthy for specs. After all, when saturation is 100%, there's little, if any, buying room left.

Gold's current price action hasn't removed all the risk from Buying Gold or gold proxies at these levels, though. Investors holding gold in a portfolio with other assets aren't getting as much risk diversification from bullion now. The correlation between gold and S&P 500 stocks, in fact, has been rising – from negative 20% to positive 49% – since late September.

Nobody, of course, complains when highly correlated asset prices rise; it's a price tumble that generates calls to brokers and advisors. Gold's supposed to provide a hedge for Dollar-denominated assets. That effectiveness, measured on a 30-day rolling basis, can vary significantly, though. Over the past two years, the average correlation between bullion and blue-chip stocks has actually been positive. The best risk diversification is afforded by assets that can maintain a negative correlation.

And earlier this year, gold's correlation to the S&P index actually exceeded 80%... 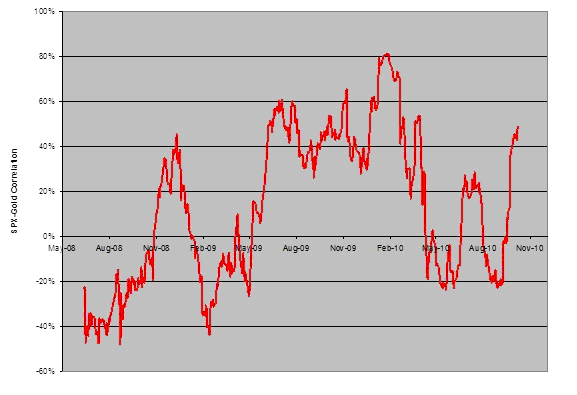 The bottom line is, for gold, that there's not just one big bubble to pop. In fact, there are likely to be a lot of mini-bubbles that'll burst along the route through our current economic morass.

Get the safest Gold Bullion at the lowest Spot Gold prices that private investors can access using world No.1 BullionVault today...