END_OF_DOCUMENT_TOKEN_TO_BE_REPLACED

Geologic success can only come about if a company is exploring in the right geologic terrain – a terrain that is capable of hosting a major deposit. This is, of course, easier said than done, and it is critical that the speculator in this sector be able to recognize the difference between a legitimate play and a questionable story.

Unfortunately for the speculator, Mother Nature has been very generous and supportive to the exploration sector. She has scattered gold, copper and silver anomalies all over the world, then hidden what lies beneath them under gravel and jungle. She has then left the elucidation of what lies below the surface to a discipline that is best described as art informed by science: geology.

Geology and minerals exploration are not exact sciences. Minerals exploration is not accomplished through the careful mixing of measured quantities at a sterile laboratory or by complex mathematical calculations done on a computer. It is done by geologists working in the frozen wastelands and barren deserts of countries that most of us didn't know existed 10 years ago. They are invariably dealing with a limited data set and projecting that information into the third and most important dimension, depth. Testing that dimension requires drilling, an expensive endeavor that usually provides more questions than answers.

Success for the speculator therefore depends on:

The "Life cycle of a junior explorer" graph presented below illustrates the normal evolution of a successful discovery from startup to production. The time to buy is when you find the right management team exploring in the right place – at the right price, of course. 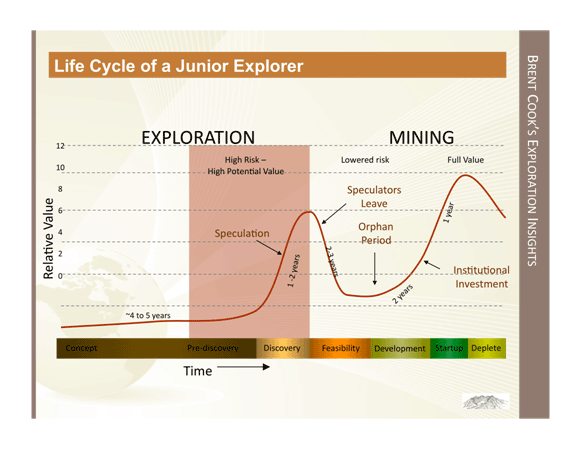 Knowing when to sell becomes a more complex issue after the initial success: you have to know what the mineral deposit could actually be worth.

To do so early on requires a realistic estimate of the probable mining, processing and capital costs, plus, metallurgical recovery, strip ratio and local infrastructure. Tax rates, royalties, permitting, and social and political issues all have to be factored in as well.

Ultimately, your sell price should be dependent on a rough net present valuation (NPV) estimate of the deposit the junior company has discovered, or at least appears to have discovered. That basic knowledge provides the edge that allows an investor to sell a stock when other less informed speculators are still buying.

Major Gold Mining companies are facing a big problem. They are unable to find and develop enough ounces to keep up with demand, for the simple fact that economic gold deposits are extremely rare. The chart below, taken from the GFMS consultancy's latest Gold Survey, shows global gold mine production during the past 30 years, and it demonstrates this fact. 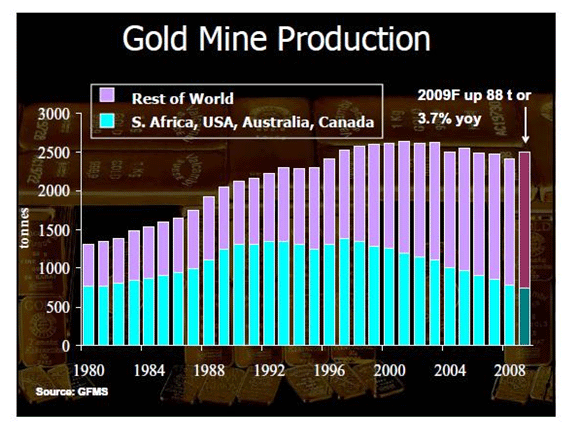 Overall, production shows a very simple trend: it rose until about 2000 and has fallen since then. This reduced production occurred even as the price of gold has increased nearly 400% in the past 10 years. This incongruity tells us something fundamental – there's a problem.

From 1980 to about 1992, production from South Africa, North America and Australia increased dramatically. Since then it has been falling just as dramatically. Production in the rest of the world picked up at about the same time production dropped in the established mining districts, and has been filling the gap in production since then.

The reasons for the early increase in production from South Africa, North America and Australia, and the later increase in the rest of world are due to factors that are not likely to be repeated. This has important implications for major Gold Mining companies, exploration companies and ultimately us here at Exploration Insights.

There are three main reasons why gold production increased up to 2000, despite declining gold prices:

The net result was that new technologies kept old deposits going longer and made previously uneconomic ones viable, thereby ramping up production into the early '90s.

New deposits in previously unexplored and off-limits areas kept that production going until about 2000. All well and good, but as the image below shows, the industry is not finding as many new deposits as they need to in order to maintain current production levels. And, although we can expect incremental technological improvements in processing, mining and exploration, there is nothing revolutionary on the horizon. 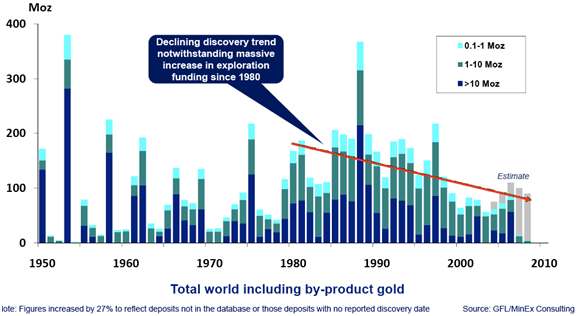 This is a worrisome slide for major gold producers – they are unable to sustain themselves. For the most part they are surviving via old deposits that are running out of ore and newer deposits that are quickly headed into the "old" deposit category. Reserves from these aging deposits are not being replaced by new discoveries. Producers' problems are further exacerbated by rising exploration and development costs, plus the significant time it now takes to permit and finance a new deposit, if they are able to at all – a subject for another day.

Everything I have said up to now is good news for the junior Gold Mining explorers and for those of us speculating in this sector. If a company can make an economic discovery, there are ready buyers willing and able to pay a significant premium for something they want and need.

But now for the Bad News: It ain't easy. Consider this next diagram... 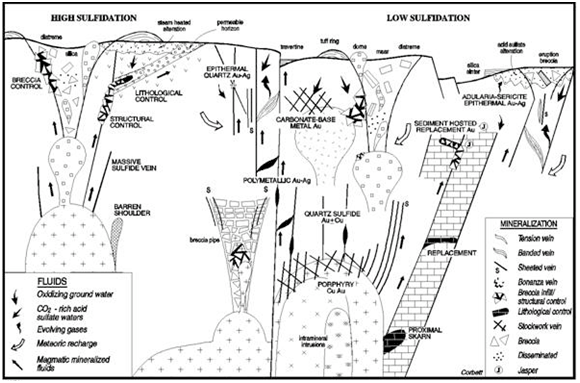 This very complex schematic diagram, a small cross section through the earth's surface, illustrates all of the deposit types and settings associated with subduction related magmatic mineral systems: essentially the Pacific Ring of Fire and some zones running up through Central Europe and Eurasia. With each of these individual settings comes a characteristic mineral and alteration assemblage that changes with distance from the hydrothermal source.

This "zoning" reflects and is a result of different chemical, pressure and temperature environments. On top of those primary factors we have to overlay the structural setting and rock type, either of which can be the make-or-break feature for the formation of an economic mineral deposit. An economic mineral deposit results from the unique combination of all of these features, a combination that rarely occurs in nature.

Although nearly every intrusive magma body (the hatched bodies in the diagram) will have some of the right stuff, I would estimate that 90% of these mineral systems do not contain a geologically economic deposit – they have anomalies; the very same anomalies that keep the exploration industry in business. That "geologically economic" classification doesn't consider the added criterion that takes the mineralization into the truly economic category: it has to be near enough to the surface and recoverable to be economically viable. To those hurdles we can add political, environmental and social obstacles.

Now place the same diagram under thick jungle cover or hundreds of meters of gravel and you begin to get the sense of how hard it actually is to make a real discovery. This is why maybe less than 1% of the exploration projects out there will ever turn into an economic discovery, and nearly all the exploration companies eventually go broke.

If, for example, you are a company exploring for gold, you have to know where you are, and, more importantly, where you are not in these geologic models. If you are an investor in said company, you had better know too. It means all the difference between making a fortune on what the market has presented you – a sweet spot where the major miners need new deposits and can afford to pay top Dollar for discoveries – and missing a real opportunity.

Want to buy physical gold today and own it – outright – as safely but cheaply as possible? Start at Bullion Vault here...