END_OF_DOCUMENT_TOKEN_TO_BE_REPLACED

One-and-a-half-reasons for gold investors to keep a close eye on the European single currency...

THIS NEW YEAR, I had to give thought to something I haven't considered since my own kids were young, writes Brad Zigler at Hard Assets Investor...

Just what kind of a present do you get for a 10-year-old?

In this case, the 10-year-old isn't a child. It's a currency. The Euro – now coin of the realm for 16 nations – celebrated its first decade on New Year's Day.

So why would we here at Hard Assets Investor care about a fiat currency that's just managed to shake off its training wheels? Two reasons. Well, one and a half, really.

Reason One: No other currency in the world could be backed by more Gold Bullion than the Euro. I say "could be backed", because the Euro's value really isn't driven by gold. US president Richard Nixon Shut the Gold Window in 1971, long before the Euro's birth, locking the metal out of the world's monetary system. But still, the Eurosystem – the European Central Bank (ECB) and the national central banks of each European Monetary Union (EMU) member country – own more than 36% of the world's official gold reserves, a third more than the horde maintained by the United States.

Reason Number One-And-A-Half: During the tenure of current ECB president Jean-Claude Trichet, the Euro has been more resistant to inflation than the Yankee Dollar. That, in part, explains why the Euro has been gaining ground on the greenback as a world reserve currency over the last decade (and why we use the Euro in our real-time monetary inflation calculation here at HAI).

The ultimate refuge from currency devaluation (meaning "inflation" in other words) is a peg to gold. You can't, of course, turn in Euro notes for bullion, but M. Trichet's policies would certainly get you closer to redeemability than the tenets of US Fed chairman Ben Bernanke.

After all, "Helicopter Ben" wants to dump greenbacks on the populace to avoid deflation. Just try to imagine Trichet doing the same with his gold ingots. Doesn't figure, does it?

Now, don't get me wrong. The Euro is a fiat currency too, printed at will and forced upon the world by government diktat. And to be sure, there's been inflation in the Eurozone; it's just not been as virulent as the Yankee variety.

Over its 10-year life span, the Euro suffered inflation, in terms of its gold purchasing power, at a 9.8% annual rate. That hardly seems a record worth crowing about until you note that the US inflated its currency at an 11.8% annual clip. Compared to the Brits, however, even American inflationistas seem circumspect. The world's third most widely held reserve, the Pound Sterling, has been devalued at a 13.1% annual rate over the past decade. 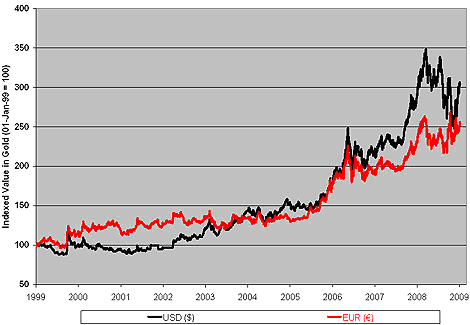 Only 5% of the Euro zone's gold is actually held by the European Central Bank in Frankfurt. Most of the gold and foreign exchange reserves held by member countries before the launch of the Euro in 1999 remain in the possession of their national banks today.

But under the terms of the 1992 Maastricht Treaty, however, these reserves are at the disposal of the ECB. It's as if the state treasuries of California and New York held gold pledged to the Federal Reserve.

All told, the gold held in the Eurosystem amounts to 10,887 tonnes (350 million ounces), which represents more than half of the zone's reserve position. In contrast, more than three-quarters of US reserves are held in gold.

But the US holds 25% less gold by volume than the Europeans...showing the Eurozone's comparative size and strength of currency reserves overall.

The Euro itself is a reserve currency that has, up until now, been steadily whittling away the Dollar's hegemony. Euro allocations have risen by more than a third in the past decade at central banks globally, mostly at the expense of the US currency. Now the Euro is the second most widely held reserve currency in the world. 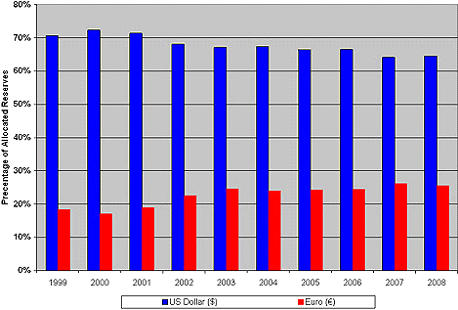 The Euro's attractiveness as a reserve currency, however, could be jeopardized by the current global recession.

Under M. Trichet's stewardship, the ECB was an inflation hawk. But the bank's reticence to cut interest rates on his watch could actually put the Eurozone on a slower track to recovery. Additionally, marginal economies such as Poland, the Baltic states and Hungary are stepping up their bids for early entry into the system. Admitting these hobbled nations into the bloc could have a corrosive balance sheet effect, as exposure to bank failures would mount.

Apprehension about a breakup of the Euro bloc is already growing. The widening disparity between the weak and strong economies of Europe – plus the one-size-fits-all monetary policy response – may end up chafing some members. Indeed, the growing spread in Continental bond rates mirrors the widening rift.

Talk about the internal tensions in the Euro bloc is nothing new. The Euro was born amid doubts of its sustainability in a global economic crisis. But that crisis is now here, so the next few months will tell us if we should make plans for a second decade's celebration.