END_OF_DOCUMENT_TOKEN_TO_BE_REPLACED

"Buy gold" to defend against the collapse of the Euro project...

Imagine trying to dam a powerful river. You build the thickest dam you can afford. For a while, the dam holds the water back and a reservoir forms. As the reservoir gets bigger, the water's pressure grows. Eventually, the weight of the reservoir exceeds the strength of the concrete, and the dam starts crumbling...

...and sooner or later, the reservoir ends up in the valley...along with your dam.

Governments build dams in the financial markets all the time. They use currency controls to prevent citizens from taking money out of the country. They hold interest rates at low levels to encourage consumption. They order pay freezes to stop wage inflation. They use subsidies to prop up failing industries.

You can find thousands of examples of failed government dams. But my favorite example is from 1992, when a British government dam failed in the currency markets. 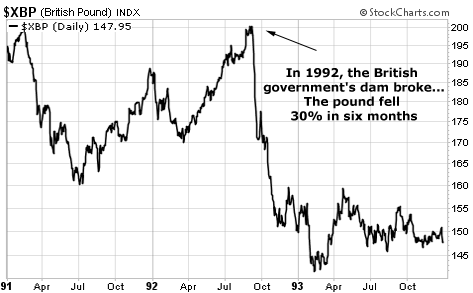 Britain had joined a currency system with the other European countries. To stay in this system, Britain had to keep its currency at a high level. Economic fundamentals didn't support the pound's high valuation. So the government built a dam. It spent $50 billion buying the pound and set interest rates at 10% to entice investors to buy it, too.

The problem was, the forces pushing down the pound were too great for the government's dam. The pressure kept growing, and on September 16, 1992, the central bank raised interest rates from 10% to 15% in a last-ditch effort to shore up the dam. It didn't work. The dam burst. The pound fell from $2 to $1.42 over the next six months.

Legendary hedge-fund manager George Soros rode the flood and famously made a billion dollars in profit.

Right now, the Euro is in exactly the same place as the pound was in November 1992. Five European countries borrowed too much money. Now they're struggling to service their debts. The fundamentals call for a much lower valuation for the Euro... or even a complete disintegration of the currency union.

The Germans and the French are the main architects of this currency union and they don't want their currency to lose value. So last month, they built a dam to prop up its value. They created a $1 trillion fund to guarantee the debts of the weakest economies.

This dam is already crumbling. Greece is the weakest of the troubled countries. Interest and insurance rates on Greek bonds have totally ignored the European bailout plan. They both hit new record highs last week. The markets now give a more than 50% chance Greece will default on its bonds sometime in the next five years.

In other words, investors have less confidence in Greek debt now than they did before the European bailout. This tells me the dam is too weak to hold back the reservoir. I'm sure the dam is going to burst and the Europeans will give up fighting the markets. When they do, the Euro will take another big step lower.

I first covered this idea in the May 15th DailyWealth. In that essay, I suggested three ways for you to bet on a fall in the Euro...including an inverse Euro fund. The Euro was trading around $1.30 then. It's now at $1.23, having been as low as $1.19. Steve and I both recommended this fund to our subscribers back in December 2009. I took profits last month near the lows. So did Steve. (Our readers pocketed more than 30% gains.) Right now, in contrast, my top recommendation for the average investor to take advantage of the "broken dam" indicator is to simply buy and hold Gold Bullion.

Gold is anti-paper currency that rises when government dams break. Gold has climbed higher every year for the past nine years. And thanks to boondoggles like Europe's trillion-dollar bailout program, it will rise for many more.

Buy gold live online in open exchange – no dealer mark-up! – only at world No.1 BullionVault...