END_OF_DOCUMENT_TOKEN_TO_BE_REPLACED

How much gold and what gold-mining equity weighting is best for a portfolio's efficient frontier...?

Economic policy decisions being made in Washington could further increase the investment appeal of these mining stocks. The charts below clearly illustrate why. 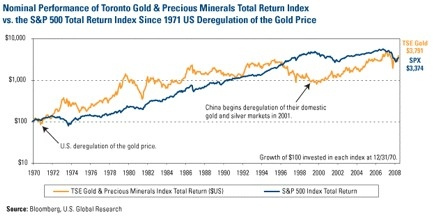 This first chart below compares the total-return performance of the S&P 500 (blue line) with that of the Toronto Gold & Precious Minerals Index (gold line) going back to 1971, when President Nixon ended Dollar convertibility into gold and deregulated the price of gold.

At that time, the United States was in the thick of the Vietnam War and was pumping billions of Dollars into the financial system to pay for it. The Dollar's value dropped compared to other currencies, and the demand for gold and its price shot up. At the same time, the US stock market was languishing, taxes were high and new regulatory entities like the EPA were being created. It was also a period of socialism, unionism and protectionism in Europe.

This second chart shows the US federal budget, and the trend is readily noticeable.

When the federal government is spending more than it takes in, Gold Mining stocks tend to outperform the broader market. One hundred Dollars invested in the S&P 500 at the start of 1971 underperformed the gold-stock index essentially for a quarter-century. In each of these years, the federal government engaged in deficit spending.

The S&P 500 surpassed the gold-stocks in 1997, in the midst of the tech boom and budget surpluses under President Clinton. When those surpluses reverted to widening deficits after the Sept. 11 attacks, you can see the spread between the broad market and gold equities narrowing. At the same time, another important event occurred – China began to deregulate its precious metals markets. During that period, the S&P 500 dropped before largely leveling off, while gold stocks charged forward.

Of course, Gold Mining stocks are among the most volatile asset classes, but old and new research shows that their judicious use can enhance investor returns without adding portfolio risk. US Global Investors has updated research on gold stock investing by Jeffrey Jaffe, a finance professor at the Wharton School, that was published in the Financial Analysts Journal in 1989.

Prof. Jaffe's study covered the period from September 1971, just after President Nixon ended convertibility between gold and the Dollar, to June 1987.  The Jaffe study concluded that adding gold and gold stocks to a large portfolio increases both risk and return, but that the additional return from these non-correlative assets more than compensates for the additional risk.

On the risk side, gold and gold stocks had greater volatility (measured by standard deviation) than the S&P 500. But Jaffe found that, due to their non-correlative qualities, adding gold-related assets to a diversified portfolio would likely reduce overall risk.

We picked up the Jaffe study's result for gold stocks (measured by the Toronto Stock Exchange Gold and Precious Minerals Total Return Index, converted to US Dollars) and compared it to the S&P 500 Total Return Index from September 1971 through the end of May 2009. 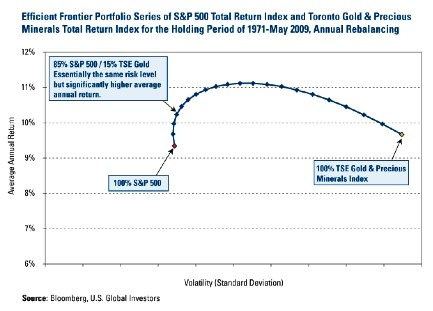 Our research included creation of an efficient frontier series to establish an optimal portfolio allocation between gold stocks and the S&P 500, with annual rebalancing. As you can see on the chart above, a portfolio holding 85 percent S&P 500 and 15 percent gold equities has essentially the same volatility as the S&P 500 (horizontal axis) but delivered a higher return (vertical axis).

US Global Investors consistently suggests up to 10% gold in a portfolio allocation, so we also looked at returns for investors at that level. At a 10% allocation to gold equities, with annual rebalancing, you would have yielded on average 0.63% more than an exclusive S&P 500 portfolio. In Dollar terms, the $10,000 investment in the 90-10 portfolio would grow to $107,611 over the ensuing 25 years (assuming, the same average annual returns since 1971 and annual rebalancing), compared to $93,210 for the portfolio solely invested in the S&P 500.

And when you look at the efficient frontier in the chart, the 10% weighting is two diamonds above the 100% S&P 500 allocation. You can see that adding gold stocks also increased return with no increase in the portfolio's volatility.

More than two decades and many ups and downs have passed since Prof. Jaffe published his study, but our follow-on research shows that the relationship between gold, investor returns and volatility has remained pretty much the same. But another bullish indicator for Gold Bullion and gold stocks is that, for the first time in my 20 years at US Global Investors, pension fund consultants and other gatekeepers for large institutional investors are advocating an exposure to gold.

These gatekeepers have influence over managers of many hundreds of billions of Dollars in retirement funds, and they are advising a 5 percent to 8 percent allocation to gold, which is similar to the long-term exposure suggested by US Global.

Another thing that held gold stocks down was the number of gold equity financings. In early 2009 there were roughly 50 deals and more than $5 billion raised, and that put a short term cap on many of the established gold producers that that said that they were going to start buying the junior exploration companies.

The emergence of a new merger-and-acquisition cycle has been a key driver for the small exploration stocks, which have significantly outperformed the actual producers in 2009. The miners that can replenish their reserves while also controlling their costs to enhance profitability will see this reflected in their stock price.