END_OF_DOCUMENT_TOKEN_TO_BE_REPLACED

How the Fed and the "Plunge Protection Team" buoy gold by destroying the Dollar...

In the UNITED STATES, the infamous "Plunge Protection Team" (PPT) has been busy at work, engineering the most remarkable recovery in the Dow Jones Industrials since the 1930s, writes Gary Dorsch of Global Money Trends.

The Dow Industrials is up 60% from its 12-year low of 6,500 and is perched near the 10,400 level. The euphoria and greed that dominates stock market psychology today is completely reversed from the fear and panic meltdowns that prevailed in the aftermath of the default of Lehman Brothers, a year ago.

The central mechanism behind the PPT's clandestine scheme is a gradual devaluation of the US Dollar through the Federal Reserve, which has carried out the electronic equivalent of printing $1.75 trillion through the purchases of Treasury notes and mortgage backed bonds, flooding the global money markets with ultra-cheap credit.

The resulting tidal wave of liquidity has enabled Wall Street's oligarchic banks to reap bumper profits in stocks and bonds, awarding their traders with record bonuses, while making US exports cheaper and foreign imports more expensive. 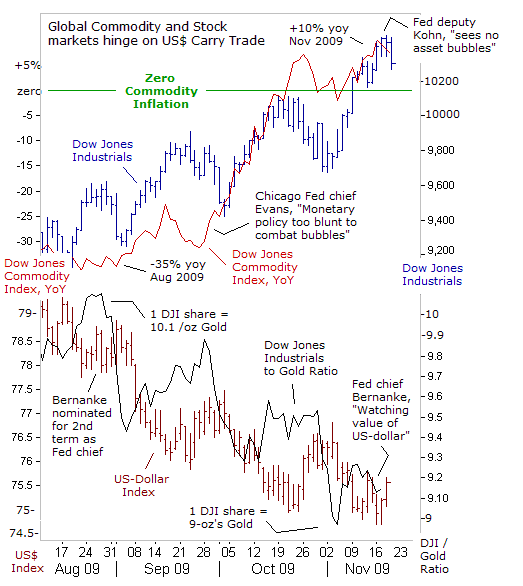 The historic rally in global markets is part of a trend that has emerged since hitting bottom in late March. Because global stock markets generally move in the opposite direction of the US Dollar.

Also in keeping with the Dollar's 16% slide since late March, crude oil, base metals, Gold Bullion and grains have also surged sharply higher. The connection between soaring commodity and stock markets and a falling Dollar points to the speculative nature of the carry trade – whereby large institutions and hedge funds borrow cheap currency, sell it, and use the proceeds to buy higher-yielding assets.

Yet carry traders should be careful about what they wish for. Because the US Dollar's gradual slide risks suddenly lurching into a free-fall.

The US Dollar has supplanted the Japanese Yen as the top funding currency in highly leveraged carry trades. Speculators are borrowing US Dollars at near zero-percent, betting that the greenback will decline further, and investing the funds in volatile stocks and commodities around the world. Over the past six months, the US Dollar is off 20% against the Canadian Dollar, down 16% against the Euro, down 11.4% against the Japanese Yen, and 36% lower against the Brazilian Real.

Nuclear quantitative easing and the US Dollar's devaluation have already led to the rapid unwinding of the deflationary forces in the global economy that threatened a second Great Depression late in 2008. The Dow Jones Commodity Index is now 10% higher than a year ago, portending an outbreak of inflation in 2010. But like its Swiss counterpart, the rally in the Dow Jones Industrials stock average is also a monetary illusion.

When measured in gold terms, the Dow is 11% lower below its peak level on August 24th, trading at 9.15 ounces of gold, and reflecting the Plunge Protection Team's monetization of the stock market. 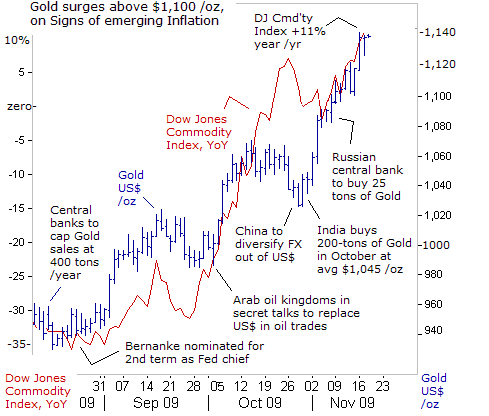 With the gold market surging above $1100 an ounce, it's comforting for gold bugs to know that Fed chief Ben "Bubbles" Bernanke views the surge in commodity markets as a signal of a revival in global economic activity –  "especially in resource-intensive emerging market economies" – rather than the early warning signs of accelerating inflation next year.

Instead, the chief US monetary policy-maker argues that inflation will remain "subdued for some time and that gives the Fed leeway to hold rates at record-low levels for an extended period," as he said on Nov 16th.

"Jawboning" is the only weapon in the Fed's arsenal right now that can be used to defend the despised US Dollar, without actually lifting interest rates. It's a delicate balancing act that's likely to go down in flames before a sophisticated audience.

"We are attentive to the implications of changes in the value of the Dollar, and the Fed will help ensure that the Dollar is strong and a source of global financial stability," Bernanke declared. Yet traders are skeptical, given "Helicopter" Ben's reputation.

His right-hand man, Fed governor Donald Kohn, went one step further, revealing for the first time, that the Fed's ultra-easy money policy is in fact meant to encourage traders to shift money into risky assets, and argued that hiking interest rates isn't the appropriate tool for deflating asset bubbles.

In unusually blunt criticism of the Fed's "bubble blowing" policy, on Nov 15th, Chinese banking regulator Liu Mingkang said the Fed's pledge to hold down borrowing costs for an "extended period of time" is creating a new systemic risk for the world economy.

"This situation has already encouraged a huge Dollar carry trade and has a massive impact on global asset prices. It is boosting speculative investment in stock and property markets and will pose new, insurmountable risks to the global recovery and, particularly, to the recovery in emerging markets," he warned.

Fan Gang, a top member of the People's Bank of China's (PBoC) monetary policy committee, said on Nov 18th, "The US needs to address how to raise interest rates to curb excess global liquidity and rein in volatility in the Dollar. Speculative capital inflows or "hot money" into China has become a problem," he said. In order to maintain the US Dollar's exchange rate at 6.84-yuan, the PBoC has cranked up its money printing operations, and ordered its state owned banks to extend a record amount of new loans, 20% of which filtered into the Shanghai stock market. 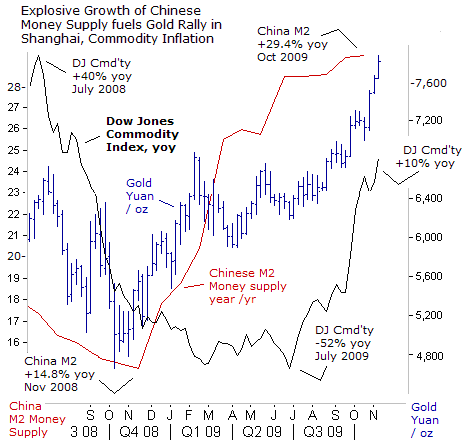 China's M2 money supply is expanding at a 29.4% annualized clip, and sowing the seeds of faster inflation in China and around the world. The late Milton Friedman, the godfather of monetarism, once remarked that, "Significant changes in the growth rate of money supply impact the financial markets first. Then, they impact changes in the real economy, usually in six-to-nine months."

Indeed, in China, the rapid expansion of the M2 money supply began in Nov 2008, and the subsequent upturn in the commodity based inflation began to jettison higher in July 2009.

Beijing is wary of printing money at such a fast pace, since an outburst of hyper-inflation would be just as debilitating as a slump in exports. Thus former Chinese central bank adviser Yu Yongding warned US Treasury chief Timothy Geithner in June:

"I wish to tell the US government – Don't be complacent and think there isn't any alternative for China to buy your bills and bonds. The Euro is an alternative. And there are lots of raw materials we can still buy."

China has already begun to experiment with alternatives. Beijing has signed currency swap agreements with Russia, and Asian and Latin American countries, in order to settle bi-lateral trade in their own currencies, rather than the US Dollar. Moreover, Beijing is increasingly using its $300 billion sovereign wealth fund (SWF) to buy minerals, and stakes in base metal miners, oil companies, and commodity trading firms, rather than to purchase US Treasury bills at near zero-percent.

Beijing has kept the Yuan's value frozen against the US Dollar over the past year, and it leading to cries of foul from US companies, Asian exporting nations, Brazil, and Euro-zone officials, complaining that their currency appreciation against the Yuan is giving Chinese exporters an unfair advantage. 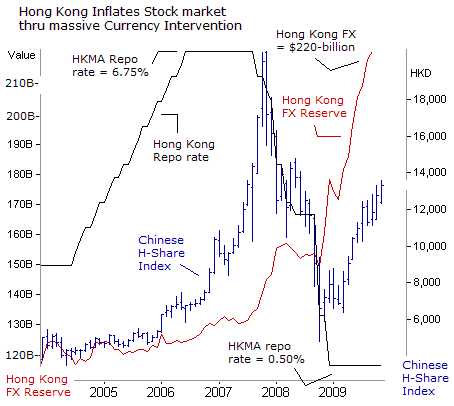 The parabolic surge in Hong Kong's foreign currency reserves, up to $220 billion last month, reflects the amount of HK Dollars pumped into the local currency market in exchange for US Dollars. That in turn ends up inflating the local stock and property markets.

The HKMA has slashed its overnight repo rate to a record low of 0.50% from 6.75% two-years ago, encouraging speculation in risky assets. Thus, the HKMA is also pursuing quantitative easing through its currency intervention tactics.

But St Louis Fed chief, James Bullard said US monetary policy won't be formulated with regard to prices outside its borders. "It's very hard to identify bubbles, and I think if there's problems in real estate markets in Asia, it's not very practical to say that you should raise interest rates in the US," he declared.

Meantime in Tokyo, the six-month US Dollar Libor lending rate just fell below the Japanese Yen rate for the first time in 16 years as the Fed signaled it would keep the domestic US Fed Funds rate pegged near zero-percent for an extended period of time.

As the US Dollar has lost its interest rate advantage against the Japanese Yen, it's tumbled from around ¥122 in June of 2007 to below ¥87 today. The "Yen carry trade" – which dominated the scene from the beginning of 2005 through the first quarter of 2009 – has been virtually unwound, and is no longer causing markets to tremble. 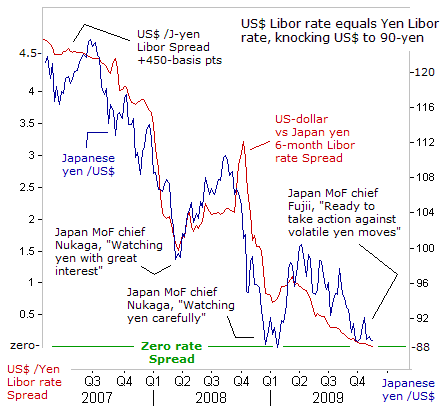 Successive Japanese finance chiefs have always come to the rescue of the US Dollar after sharp declines, since the Yen's appreciation threatens to undermine Japan's export-driven recovery and prolong its painful deflation, still running almost two decades after the Nikkei topped out.

The "current level around ¥90 is a bit painful," said Yukitoshi Funo, vice president of Toyota on Sept 25th. Sure enough, Japan's new finance chief Hirohisa Fujii heeded the call for help, and issued his clearest warning yet that Tokyo would intervene to prop-up the tumbling Dollar.

"If currencies show some excessive moves in a biased direction, we will take action," Fujii warned on October 3rd, stabilizing the Dollar at ¥88.

Japan's economy has contracted by 7.2% from a year ago, but its annual output of $4.9 trillion is roughly 8% of the world economy. Japan's industrialized economy has few natural resources, and foreign trade enables it to earn the currency to purchase raw materials, energy, and food supplies. It's also the second largest creditor to Washington, holding $751 billion of US Treasury notes, up sharply from $617 billion in September 2008.

Thus, it wasn't surprising to see President Obama bowing last week before Japanese Emperor Akihito at the Imperial Palace. Increasingly, the US Dollar's privileged role as the world's top reserve and trading currency is being called into question.

This was highlighted when India's central bank purchased 200 tonnes of Gold Bullion at an average price of $1045 an ounce in the second-half of October, in exchange for $7 billion held in its foreign currency stash. The Dollar's demise highlights the transformation of America from the world's industrial powerhouse, and into the center of global financial speculation and highly leveraged carry trades.