END_OF_DOCUMENT_TOKEN_TO_BE_REPLACED

Priced in gold, the Dollar's steadiness is a coda to America's inflationary excursion...

Or rather, the Gold Price just keeps rising if you have to pay for it with Pounds Sterling or Euros.

While some citizens on our side of The Pond are scratching their heads over gold's to-date failure to make new highs against the Yankee Dollar, British subjects have left their pates pretty much alone. Gold Bullion, for those paying in Sterling, has risen 42% since last August.

Greenback users have had to contend with barely a 1% gain in contrast. Indeed, the Dollar Gold Price has dropped back in the gold derby, trailed only by the price measured in Japanese Yen.

Since the summer, in fact, gold's cheapened by nearly 8% for Nippon buyers. 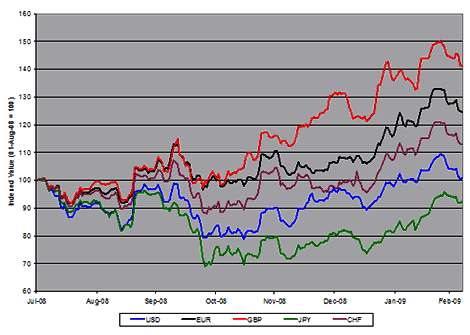 But for those thinking the glass is half full, the Dollar's steadiness is a coda to America's inflationary excursion.

In March 2008, gold reached an all-time high against the dollar, a jump that put the metal's price appreciation well ahead of that in other currencies.

We all know what happened since then. Which makes the glass-half-empty folks worry that there's worse bad stuff ahead for Old Blighty.

And what does the trailing Japanese Yen-price portend? Well, we all know what preceded that. That's got some observers worried about the prospects for the Dollar and the US economy it represents.