END_OF_DOCUMENT_TOKEN_TO_BE_REPLACED

Down in tonnes, strong in Dollars, the gold demand story for 2009 isn't so simple...

WITH GOLD reaching new all-time highs against the Euro and holding well above $1100 an ounce for US investors, it seems one thing is certain, writes Julian Murdoch at Hard Assets Investor.

Gold demand has never been higher. Or has it?

Last month, the World Gold Council released its latest supply and demand report on the yellow metal, and it revealed more than a few surprises. Because in reality, total gold demand actually fell in 2009, down 11% year-over-year by volume. But due to the higher average price per ounce in 2009, the Dollar value of gold demand remained roughly the same from 2008. 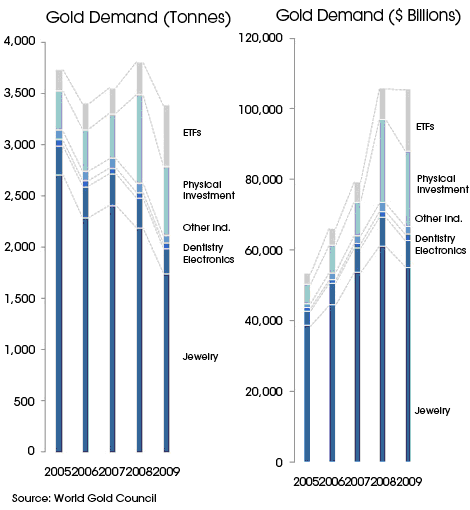 Demand for gold comes from lots of different places: bars and coins, jewelry, dentistry, electronics, some minor industrial uses. And while some applications inherently drive demand more than others, it's interesting to see how demand has shifted from quarter to quarter.

For starters, as the World Gold Council's Gold Demand Trends report shows, investors in Gold ETFs just aren't having that big an impact on gold's overall demand. In fact, so far in 2010, investment into the big exchange-traded gold-backed trusts has been sluggish.

Gold Bullion held by the SPDR Gold Trust (NYSE Arca: GLD) has fallen to 1,115.51 tonnes – down 1.6% for the year. That's a big change from the 45% inventory increase GLD saw last year. But that 45% figure is misleading. Taken as a whole, 2009 was a great year for GLD and other Gold ETFs, but new investment demand dropped precipitously over the next three quarters, and although it still rose 87% year-over-year in 2009, ETF demand long term was definitely on the wane.

Even those folks buying physical Gold Coins and bars backed off the gas pedal after the insane demand of the 2008/2009 fall and winter. As ETF investing dropped 67% from Q4 2008 to Q4 2009, so too did so-called bar hoarding – down 55% year-over-year. Even coin sales, which remain constrained by greater supply concerns, were down 8% year-over-year.

In contrast to new Gold Investment demand – at least by weight, which fell in 2009 while holding steady in cash terms – we began to see some slight indications of recovery in jewelry demand last year.

Although the rebound remained slow, some areas such as China showed year-on-year growth; the country saw a 6% increase in gold tonnage demand, which translated to a 19% increase by value.  But we shouldn't get carried away. Most markets didn't fare nearly as well, with gold jewelry demand in tonnes dropping 20% for the year and 10% in value. In fact, electronics was the only sector that saw year-over-year gains in demand in Q4 2009.

The World Gold Council cites the economic downturn as a good thing in this case, as it led to a decline in overall electronics inventories. That, in turn, resulted in a modest uptick in semiconductor sales for 2009, which raised immediate demand for gold 25% over Q4 2008. Still, applications where gold remains optional – like dentistry – continued to suffer, given the high prices. Dentistry demand fell 5% year-over-year; other industrial applications were down 13%.

According to the World Gold Council, total gold supply was up 11 percent year-over-year in 2009, primarily due to a spike in recycled gold entering the market in the first quarter. 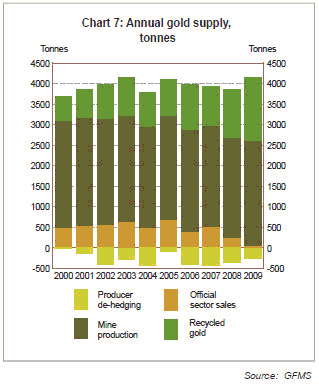 "Over the year as a whole, the supply of recycled gold exceeded historical norms," the World Gold Council says in its report.

That is, the flood of new cash-for-gold companies put 2009's supply near all-time highs, despite the fact that central banks once again were net buyers of Gold Bullion worldwide.

Gold Mining supply is also expected to continue rising this year, with major producing nations like Australia talking about 10-11% increases in production in 2010. The effect on prices? That's where the balance comes in.
/files/gold_demand_4.png
At this point, there's little question that ample gold supply exists to meet current demand, but most of the flexibility will come from scrap, which is hugely price sensitive. In its latest announcement, the  Australian Bureau of Agricultural and Resource Economics (ABARE) argues that gold will average $1080 an ounce across 2010, before dropping down to $900 again on oversupply. That's a far cry from HSBC's suggestion that gold could go as high as $5000 an ounce in the next five years.

So which is it? I tend to follow supply and demand, and right now, the market's coming off four straight quarters of oversupply. Given that fact, it's actually quite impressive the metal managed to rally $200 since last March. But I'm not inclined to think $5000 – or even a more modest $1500 – is anywhere in the cards until we see real demand start outstripping real supply.