END_OF_DOCUMENT_TOKEN_TO_BE_REPLACED

How the Euro debt crisis, and the subsequent move into gold, dented copper...

The EUROPEAN UNION's equivalent of "shock and awe" – a €750 billion rescue package of standby funds and loan guarantees, for heavily indebted member states that can't raise funds cheaply in the capital markets – enabled the Eurozone banks to survive another near death experience, writes Gary Dorsch at Global Money Trends.

Still, on May 31st, the ECB warned that Eurozone banks would face a new wave of potential loan losses – up to €195 billion over the next 18 months – from loans extended to the private sector, that are going sour. 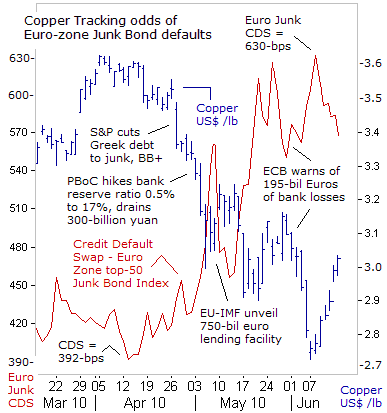 Thus, although the specter of a Greek bond default is postponed for a later date, another lethal phase of the European debt crisis began to erupt, a frightful situation where European banks become unwilling to lend money to the private sector.

There were latent fears of a Eurozone "credit crunch," looming on the horizon that could suffocate the $14 trillion Eurozone economy, and in turn, weaken the demand for industrial commodities, including copper and other base metals.

Eurozone banks are hoarding a record amount of cash, and buying German, French, and Swiss government bonds, and gold, rather than lending Euros to the private sector. As liquidity dries up, the credit default swap for the Eurozone's top-50 junk bond index of lesser creditworthy companies became a key benchmark for measuring the risk of a "credit crunch".

Each upward surge in Eurozone junk bond CDS rates ignited a knee-jerk sell-off in the price of copper – often called the metal with a PhD in economics, thanks to its strong correlation with near-term economic growth worldwide.

Conversely, each decline in CDS junk bond rates has given a boost to the red-metal. 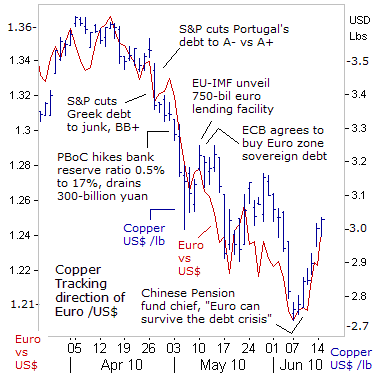 The Euro's slide against the US Dollar to a four-year low at $1.1850 also began to exert downward pressure on the copper market.

The European Central Bank (ECB) has vowed to print vast quantities of Euros, in order to monetize the debt of financially weaker Eurozone governments. The ECB's lack of clarity over the size of its printing operations left the Euro vulnerable to speculative attack, and a loss of confidence among central banks, that hold more than $2 trillion of the currency.

However, in the aftermath of copper's 20% slide from its recent highs, to as low as $2.75 per pound in New York, bargain hunters and contrarians, began to wade into the long-side of the market, betting on a rebound for copper, on ideas that the Euro would ultimately stabilize above the psychological $1.20-level. In the commodity and currency markets, trader sentiment is fickle and can turn on a dime

Fears that Beijing was dumping Euro from its $2.25 trillion FX stash were alleviated on June 10th, when Dai Xianglong, manager of the China's National Security Fund said, "I think it is quite normal for the Euro to be experiencing swings because of the European debt crisis. However, I do believe the Euro will gradually stabilize and survive the crisis." Within minutes, Dai's soothing remarks lifted the Euro towards $1.2100, and in turn, the copper market hit bottom at $2.75 per pound.

Over-extended short sellers in the Euro began to panic, after Dai indicated he was more concerned about a slide in the value of the US Dollar. "The US fiscal deficit is still big, so there is a risk that the value of China's forex assets will contract," Dai warned. Nowadays, currency fluctuations are used as an excuse to make speculative trades in industrial commodities. Along with the Euro's rebound to $1.2350, the copper market jettisoned 10% higher to $3.02 per pound.

At-the-end of the day, copper – the metal with a PhD in macro-economics – is a great place for wagering bets on cyclical swings in the global economy, the whims of G-20 central bankers, gyrations in the US Dollar, and the direction of Shanghai red-chips, all intertwined within a hotbed of speculation...

Looking to Buy Gold for defense today? Make it low-cost and ultra-secure by using Bullion Vault...