END_OF_DOCUMENT_TOKEN_TO_BE_REPLACED

US government confiscated Gold Bullion in 1933. Are nickel coins next...?

A HUGE opportunity for US citizens to hedge themselves against both inflation and deflation is lying out there in the open, writes Gary Gibson in Whiskey & Gunpowder.

There aren't any transaction costs – and right now, there's even a built-in discount. But most people will never realize any of this. 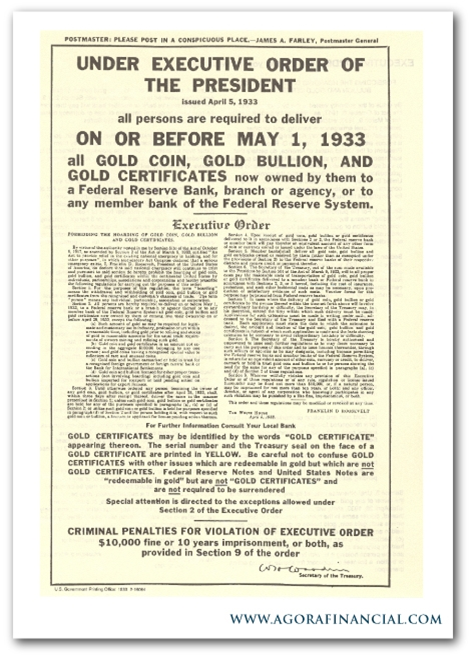 Back in 1933, US president Franklin Delano Roosevelt signed Executive Order 6102, which made it illegal for US citizens to hold Gold Bullion.

Prior to that order, the $20 bill was essentially a warehouse receipt for a one-ounce gold coin. Prior to the Federal Reserve Act of 1914, the $20 bill actually told you this. 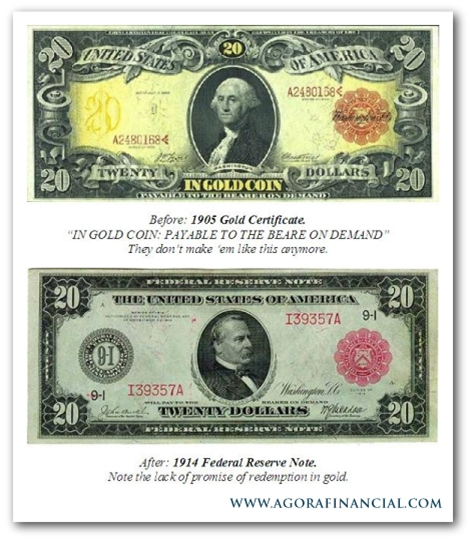 After Executive Order 6102, $20 notes weren't allowed to be exchanged for gold anymore. Americans couldn't legally own or trade gold as money and savings, only as jewelry or collectible Gold Coins.

A year after making monetary gold ownership illegal, FDR revalued Gold Bullion from $20.67 per ounce to $35 an ounce with the Gold Reserve Act. The Act also required all gold and gold certificates to be turned over to the Treasury.

The Dollar was debased. Instead of "containing" 1/20th of an ounce of gold, each Dollar now only contained (or represented) 1/34th of an ounce. And of course you couldn't actually own the gold itself. That was illegal, remember.

In 1971 Nixon severed the last official ties between gold and the Dollar. The Dollar quickly sunk to its real value, which had been debased by years of money supply inflation. And by 1975, Americans were allowed to own Gold Bullion – whether coins or bars – again, but during the roughly 40 years bullion gold ownership had been illegal, the Dollar had been drastically debased. At its former lowest point in the summer of 1980, the Dollar was worth only 1/850th of an ounce of gold. It regained some value for a while, but right now a Dollar gets you less than 1/1300th of an ounce of gold.

That was the story with a piece of paper that was merely standing in for a monetary metal. But what happens in the case of circulating coins actually composed of monetary metals? Let's look at quarters, dimes, nickels and pennies...

The US nickel has been cupronickel since 1946: 75% copper and 25% nickel with trace amounts of manganese. But that's probably about to change.

Why are quarters and dimes no longer silver? Why is the penny no longer mostly copper? And why will the nickel likely follow suit fairly soon?

Because the amount of silver and copper and nickel in each case came to exceed the face value of the coin. The debasement of the US currency over time has required the metal in the coins to be replaced with a cheaper substitute.

The average American has no idea what inflation really is or why currency debasement is a problem at all. He figures one metal is as good as another in minting of the currency...that when the face value of a coin falls below the value of the metal in the coin, it's nothing more than a curiosity. Substitute a cheaper metal, they think. Problem solved.

And indeed the problem is solved for the government, which mints the coins made of real money at a loss after the effects of bouts of the inflation started by monetization of government debt. For savers and the overall economy on the other hand...their problems are just beginning...

But that is a story for another time. For now let's look at the opportunities to be had when the government makes metals available for a fraction of their market price via coins...And let's see if there are any opportunities left (Hint: there are!).

If you had seen the writing on the wall in the early 1960s and started hoarding quarters and dimes while they still were almost wholly silver, you would have found that your dimes were worth a high of $3.57 each in 1980 and your quarters were worth $8.93 each.

In fact, these 90% coins still trade just like regular Silver Bullion bars and rounds. They were taken out of circulation – "hoarded" – by those savvy to debasement (Gresham's Law tells us that good money will be hoarded when bad money floods the market). These coins were collected without any transaction costs. They were bagged up with different face value totals: $1,000 bags, $500 bags, $250 bags, $100 bags and $50 bags.

Each of these bags traded for over 35 times their face value because of the silver in the coins. At least they did at silver's peak in 1980. Even during the ensuing 20-year slump in Silver Prices, the value of Silver Bullion coins never dipped below three times face value.

And now, thanks to waves of money and credit expansion from the Federal Reserve, silver is pushing back toward its old highs. These bags of silver coins are trading at more than 20 times their face value. They may hit 30 times face value again...and beyond...

Silver probably has another trick or two up its sleeve. But let's turn our attention to the humble nickel...

You can't cash in on this arbitrage directly (anti-smelting laws for pennies and nickels were introduced in late 2006). But the bullion market for cupronickel coins will develop, just as it did for silver US coins. This will happen once the government starts minting five-cent pieces made out of cheaper metals.

To those who doubt this will happen, I refer you to the bags of silver coins trading as bullion for over 20 times their face value. You can easily order such a bag right now by going to any of a number of online bullion dealers. These bags of coins sell right alongside silver bars and rounds.

Right now, the government is subsidizing your copper and nickel purchases...and cutting out the middleman. As much as we complain about government, we ought to stop and offer them a little thanks for this one.

What's even more interesting is that hoarding nickels provides an imbedded hedge against deflation. That's because a nickel will always be worth a nickel, at least. So if the Dollar strengthens and copper, silver, and gold all get cheaper in Dollar terms, you can still spend your nickels just like any other money. Your purchasing power stays the same, maybe even increases.

But if the Dollar declines, then the value of the cupronickel in the currency will rise against the face value. Eventually – at two or three times face value – these five-cent pieces will trade as bullion just as 90% silver quarters and dimes did and still do.

Your only real problem is storage; a few thousand Dollars of nickels takes up a lot of space...and it's heavy. But people had the same problem with silver when it was cheap. I doubt they're complaining now.

Having "too much" cupronickel won't seem like much of a problem if inflation continues to drive the cupronickel in five-cent pieces far in excess of face value. The cupronickel is America's last piece of honest currency.