END_OF_DOCUMENT_TOKEN_TO_BE_REPLACED

DURING the last major precious metals bull market in the 1970s, only about 10% of the world could own gold, writes Casey Research partner David Galland.

Due to either legal restrictions or a lack of liquid capital, 90% of the planet was shut out.

Today, few countries prohibit gold ownership, and a far higher percentage of the world's population has transitioned out of poverty.

China provides the most germane example, having legalized gold and silver ownership for private citizens in 2004, and through the explosive growth in national GDP that has caused Chinese gold purchases to skyrocket. 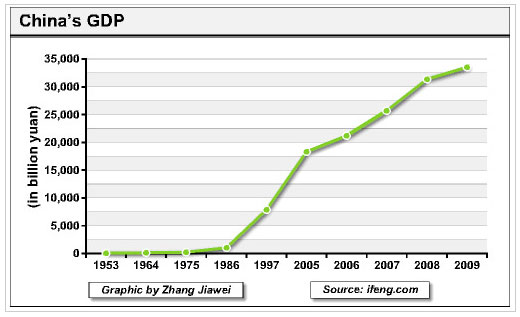 Confirming the point, the following is an excerpt from a recent Wall Street Journal article:

Chinese investors are snapping up Gold Bars and coins, buying more than ever before in the first quarter of 2011 and overtaking Indian buyers as the world's biggest purchasers of the metal.

A growing middle-class in China is raising the appetite for gold there.

China's investment demand for gold more than doubled to 90.9 metric tons in the first three months of the year, outpacing India's modest rise to 85.6 tons, the World Gold Council said in its quarterly report on Thursday. China now accounts for 25% of Gold Investment demand, compared with India's 23%.

The report underscores the rising appetite for gold among the growing middle-class in China. Fears of the country's soaring inflation, as well as a search for new investments, is luring investors to gold, and marketing of the precious metal has also increased in recent months.

"I think people will be surprised by the strength in the Chinese demand, but we think this is a trend that is set to continue," said Eily Ong, an investment research manager at the gold council.

Notoriously active savers, stashing away on the order of 50% of their income, the Chinese are increasingly opting for gold over China's currency, the renminbi, to stash their wealth.

For those wondering just how big a development this is, consider that in 2007, just before investing in gold became "the thing to do," gold demand in India was 61% of the world's total while China's gold demand was only 9%.

In other words, India is no longer the only elephant in the gold vault. And they are not alone – investors around the world are now able, and willing, to Buy Gold as a way of protecting their wealth from the inevitable decline of the fading fiat currencies.

I still don't think we are out of the woods on a commodities correction, but there are so many black swans floating overhead that literally anything can happen, at any time. Thus buying in tranches on pullbacks over the next four to six months still makes a lot of sense.

Buy Gold through BullionVault and get live access to the world's only 24/7 bullion market...