END_OF_DOCUMENT_TOKEN_TO_BE_REPLACED

Cash and carry (for professional traders) points the way to higher US rates ahead...

"Gold doesn't earn interest," is one constant refrain heard from non-owners of the hypoallergenic metal. But that's not necessarily true. Gold can in fact offer a money market return, regardless of its price trajectory.

How so? The price spread between different delivery months for Gold Futures implicitly reflect short-term interest rate expectations. Thus the gold market, through cash-and-carry operations, tells us what traders think short-term rates ought to be.

A cash-and-carry is accomplished by taking possession of gold through nearby futures (or the cash Spot Gold market for physical metal) and redelivering the metal against a forward contract at some point in the future. You pick up the different inbetween, paying for gold at today's price but selling it for (the typically higher price) quoted for a few months' hence.

A December 2010 gold contract, for example, might be purchased with the intent to take delivery and store the metal until the expiration of a December 2011 future sold short. Imagine storage costs running to $10 per month per 100-ounce bar, and return of 1.1% could currently be earned. That's a 63 basis point (0.63 percent) premium over one-year Treasury bonds.

In fact, the rates for one-year cash-and-carries – essentially "risk-free" transactions – have been, on average, 60 basis points above Treasurys these past three months. Thus, the market's pointing the way to higher Federal rates. 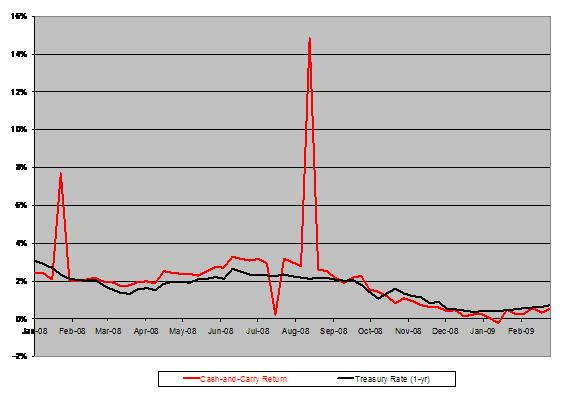 In mid-February 2008, the one-year carry return moved higher than the constant maturity Treasury rate, presaging a rebound in bond yields through midyear. In October, gold rates dropped below Treasurys, setting the stage for a year-end swoon in yields.

And take note: When gold rates run ahead of Treasurys, there's generally some Fed snugging due. (Didn't Ben Bernanke say this weekend that the Fed must be open to raising interest rates to pop asset bubbles?) Whereas when Treasurys offer a yield premium over gold carry rates, interest rates generally decline.

Gold rates are now headed back up, according to the latest action in the Gold Futures market. This implies two things:

You may not be able to get blood out of stone, in short. But professional traders taking a position in Gold Futures – buying near-dated contracts and selling further ahead – can indeed squeeze an interest yield out of gold.