END_OF_DOCUMENT_TOKEN_TO_BE_REPLACED

"GOLD IS RISING because the post-Breton Woods exchange rate system doesn't work," declares Eric Roseman, our colleague over at the Commodity Trend Alert, says Eric Fry in the Rude Awakening.

"More than ever, governments are piling up debts, as a result of bailing-out their respective banking systems. There is a price to pay for this profligate spending. And Gold sniffs trouble."

It's true; gold has become noticeably less unpopular during the last few months. It is still not as popular an investment as, say, AIG or the shares of almost any other incompetent financial institution. But some investors have actually begun to admit that they've purchased some Gold.

A couple of the most conspicuous gold-buyers – the Chinese government and hedge fund manager, John Paulson – represent quintessential examples of the "new" gold buyer. This new type of gold buyer does not also buy ammunition, bottled water and Lynyrd Skynyrd tank tops. Nor does this new gold buyer spend Saturday nights sipping Gallo Hearty Burgundy in his La-Z-Boy, while flipping through leather-bound binders stuffed with Walking Liberty Gold Coins.

These new gold buyers do not LOVE gold nearly as much as they FEAR paper. But they are buying aggressively nonetheless...and leaving their tracks everywhere.

Earlier this year, for example, Paulson & Co., the hedge-fund firm run by billionaire John Paulson, became the largest holder of the SPDR Gold Trust, the world's largest Gold ETF. Like the other exchange-traded offerings, it buys Gold Bullion to "back" the value of shares in itself, a trust. Now Paulson's New York-based hedge fund owns 8.7% of the $32 billion trust.

Paulson has also taken very large stakes in several gold mining companies – in particular Gold Fields Ltd., Kinross Gold Corp. and AngloGold Ashanti Ltd. And Paulson has lots of company among mom and pop investors who are allocating some of their capital to gold and near-gold proxies. The SPDR Gold ETF has thus been accumulating ever-rising quantities of Gold Bullion – all in response to investor demand.

The trend remains firmly entrenched. As of September 21, this ETF controlled 1,563 tonnes of gold, making it the world's fifth individual holder of gold. The Swiss central bank, by comparison, holds only a little more than 1,000 tonnes of gold. 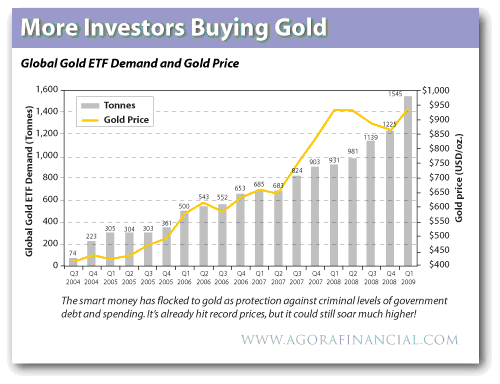 Meanwhile, the Chinese announced doubling their official gold holdings earlier this year, and have been making a lot of headlines with some very public gripes about the US Dollar.

A couple weeks ago, Cheng Siwei, former vice chairman of the Standing Committee of the Chinese Communist Party, complained, "If [the Fed] keeps printing money to buy bonds, it will lead to inflation, and after a year or two, the Dollar will fall hard.

"Most of our [Chinese] foreign reserves are in US bonds and this is very difficult to change, so we will diversify incremental reserves into Euros, Yen and other currencies...Gold is definitely an alternative."

No wonder rumors were running rampant last week that the 403 tonnes of gold the International Monetary Fund is selling will land in a Chinese vault.

Interestingly, while Gold Investment demand inexorably rises, mined production of gold inexorably declines. Apparently, the folks who coax this precious metal from the earth can't coax as much of it as they might like. According to Grant's Interest Rate Observer (citing statistics from the World Gold Council), worldwide gold production has dipped over the last seven years. Annual gold production since 2002 has declined from 2,590 metric tons to 2,486 metric tons through June 30.

These divergent trends – demand up and supply down – do not guarantee a rising Gold Price, but they do suggest that a rising Gold Price may become the path of least resistance. Obviously, substantial above-ground supplies of gold – in bank vaults, around fingers, in belly buttons – will find its way into the gold market if/as/when prices rise. Nevertheless, a powerful inflationary trend would produce enough investment demand for gold to easily absorb all sources of supply...and ALSO push the Gold Price higher.

"There is a growing distrust of paper currencies amid a deluge of massive government deficits since late 2008," Roseman concludes. "The Dollar might be the biggest drunk at the bar, but the Euro and other currencies are also drinking their way to devaluation against gold."