END_OF_DOCUMENT_TOKEN_TO_BE_REPLACED

What the gold and US bond markets are saying about interest rates and inflation...

Take the currency derby as an example. A month ago, the price of gold was soaring to new highs in every reserve currency – Yankee Dollars, Euro, Pounds Sterling, Yen and even Swiss Francs. But after the first week of December, the jockeys steered their steeds off the course to partake of the holidays.

Everybody got back on track in early January as Gold Prices rose across the currency board, rising within a cat's whisker of December highs. But truth be told, the whisker's width varied by currency. The strongest Gold Price surge was in Yen, just 0.04% short of December's multi-decade high. Next was the Euro, off 0.7%, followed by the Pound's Gold Price at 1.6% and the Swissie at 2.8% below.

Guess who brought up the rear? Yup, the Dollar price of gold. The metal's greenback price peaked this week some 5.2% shy of its December record.

To be sure, the Gold Price accelerated faster in Dollar terms through most of last year; the other world currencies only caught up at year's end. And this development is made all the more interesting by the widening of international credit spreads – the gap between the interest rate offered on government bonds compared to US Treasury debt.

This week, the yield on 10-year Yankee notes, for example, reached a two-year record over German Bund yields. Traders are starting to quit US notes in favor of Bunds in anticipation of an uptick in American interest rates as US gross domestic product increases. 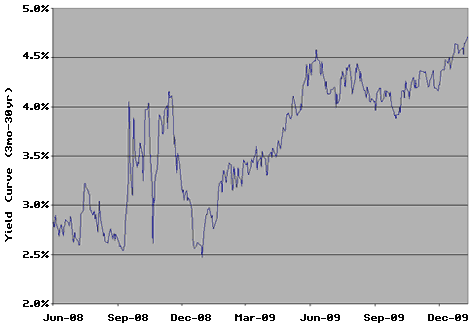 Indeed, the domestic US yield curve – mapping the different rate of interest offered by different-length maturities of Treasury debt, thus pointing to where the bond market thinks short-term interest rates will go in future – has been steepening, indicating increasing inflationary expectations.

As the chart shows, the gap between 3-month rates and 30-year yields has been widening sharply. Yesterday the spread between bills and the long bond reached 4.72%, another two-year high. And, as we've pointed out before, interest-rate expectations embedded in the Comex Gold Futures market imply a view that one-year rates ought to be yet 60 basis points higher.

Whether you're a believer in present or future inflation, the market certainly seems to have voted for it. And, as many a trader has discovered, it's hard to argue with the market.