END_OF_DOCUMENT_TOKEN_TO_BE_REPLACED

Someone just bought a truckload of August puts 10% below current Gold Price. Why...?

WHEN THE August Gold Futures contract was trading at the $939 level early Thursday in New York, somebody waded into the options market and bought a truckload of $850 puts, writes Brad Zigler of Hard Assets Investor.

Most people reading Hard Assets Investor would look at such a trade and wonder, "What was the buyer thinking? Does he/she really think August gold is going to trade below the puts' $847.50 breakeven point in the next month or two...10% below current prices?"

Well, maybe. But a move below $847.50 isn't necessary to make the put trade profitable for the buyer. As long as a bit of downside volatility develops soon. And all that has to happen is an expansion of the options' perceived time value to make them worth more than the $2.50 premium paid. Because the put strike price is so far away from the current price of August gold, the premium is nothing but time value.

Time value is ethereal and elastic. It represents the value of the time left in an option's life, a sort of a rent paid to await a favorable market condition to develop that could push the option into the money.

Let's turn our attention to the seller of the puts for a moment. What is he/she up to?

Well, first and foremost, the option seller granted the purchaser the right to put, or sell, August gold to him/her at $850 an ounce, no matter what the contract's actual trading price may be. If August gold falls all the way to $800 an ounce, the put writer would still be obliged to buy the underlying futures at $850 if the option were exercised by the owner.

Buying a put is inherently a bearish play.
The put purchaser makes money only if August gold declines sharply. For the put seller, in contrast, it's anything but bearish, because they're sitting on the other side of the trade, and would have to buy that gold – at that price of $850 an ounce, 10% below current levels – if the buyer opts to exercise his put. Whereas a flat market or a bull market will leave the options write sitting on a profit, as it would eat up the puts' time value, allowing the seller to pocket the premium without then having to buy the gold as well.

That's not everything, however, the put seller may have in mind. It's entirely possible that the seller anticipates gold declining and is using the puts as a long entry point. Think about this a moment. The exercise of the puts makes the option writer long August gold. The put writer could well be thinking of August gold bouncing off a support level after a tumble. 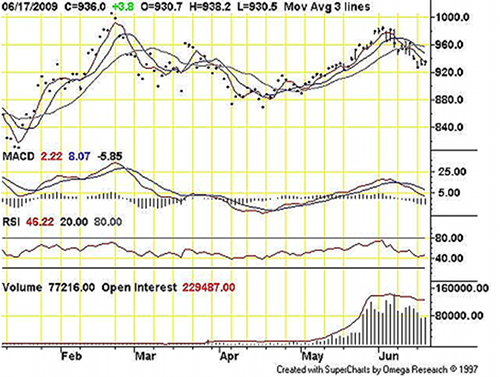 There are key retracement marks for August gold from the 2008 market swoon at $871 and $833. Maybe these option traders are giving us some clues to market thinking.