END_OF_DOCUMENT_TOKEN_TO_BE_REPLACED

Gold faces a very bullish scenario as the US credit bubble unwinds...


THE STORY BEGAN in early 2007 with the blowout of Novastar and New Century, the multi-billion non-bank US intermediary mortgage brokers.

Then in summer last year we witnessed the collapse of American Home Mortgage, America's largest subprime mortgage issuing bank. We then saw a series of subprime write-offs amounting to hundreds of billions by banks, funds, and institutions around the world.

The trouble moved up the chain of the mortgage complex, with Fannie Mae and Freddie Mac announcing surprising losses. And by 2008, the problem struck core as stock in Countywide, American largest mortgage issuing bank, plunged into the single digits on the rumors of impending bankruptcy.

The Countywide saga then ended last week with an orchestrated buyout by Bank of America. 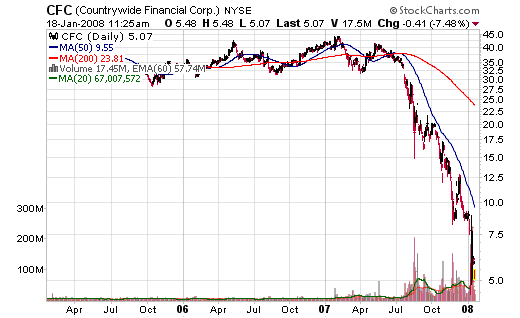 Even with such drastic measures deployed, worry and uncertainty still linger. So where do we stand for 2008?

Given that the mortgage exposure of Fannie and Freddie sits in the hundreds of billions, we look for Freddie to announce insolvency unless bailed out by the government. 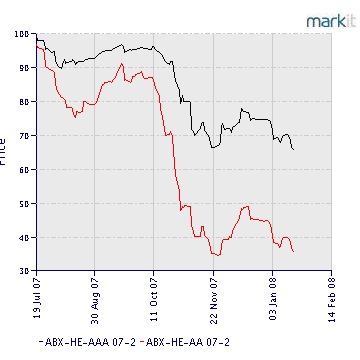 Subprime debts, meantime, are changing hands at less than 20 cents on the dollar. Thus the entire subprime market, a key driver of the US economy and money creation, is over.

Given there is upwards of $2 trillion of subprime debts, which are selling at 20 cents on the dollar, we will see a lot more subprime write downs to come not just from banks, but pension funds and endowments throughout 2008.

Indeed, Ben Bernanke lied when he assessed the damage of subprime at $200 billion as recently as Nov. '07. According to official data published by the Federal Reserve, asset-backed securities (the yellow line) have now dropped from $1.2 trillion in value to $750 billion.

And while the 40% loss officially reported is not as bad as the 30% to 80% loss estimated by Markit.com, the estimate nonetheless is stunning and shocking. 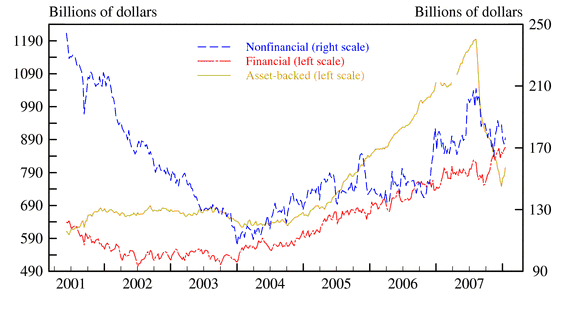 Last year we speculated here at GoldMau.com that credit card backed securities would be the next victim. Now Capital One, America's top credit card issuer, confirms our belief.

The company announced mounting payment delinquencies and failed to deliver target earnings. We anticipate much further room to fall for COF, and most credit card issuers to come under pressure as well.

Credit card debts/backed securities are a multi trillion dollar market. The fall out from this market will make headlines no less spectacular than ones created by subprime.

Commercial and municipal debts are now under pressure, too. Ambac is a AAA-debt issuer with municipalities, cities, and private companies as clients. They have lesser credit quality than Ambac, and the bond insurer makes money by pawning its own AAA rating and issuing tens of billions of AAA-bonds to fund its clients.

The profit comes in charging a nice fee in the process. From Ambac's website:

Fitch's downgrading of ABK's credit rating last week – if followed by a similar move from the other two major rating agencies, S&P and Moody's – would mean an end to this income stream. And as a "monoline" insurer with only one line of business, that can't be good for its future.

Either way, the US debt binge is now over. Foreign investors will increasingly shun US debt assets backed by mortgages, credit cards, car loans, and third party guarantees such as Ambac's.

And this will create downward pressure for the Dollar.

Both the US economy and money supply growth will also slow. Dollars are created and supplied through borrowing, but if banks can't sell/flip those loans and mortgages they originated by selling them as asset-backed or securitized debt, they are likely to create a lot fewer loans and mortgages.

US consumers are tapped out, regardless of interest rate cuts. Frivolous lending on credits cards and home loans has come to an end through tightened lending practices. This will slow down consumer spending.

Interest rates will of course remain tame. The Fed can't raise them or it will trash trillions in already distressed debts. But it can't lower them much more with oil already near $100 per barrel.

To avoid an outright deflationary collapse, the Fed and US government have to keep money supply growing, albeit via creative monetary and fiscal policies:

This is an extremely bullish scenario for Gold, not because the pace of money supply growth is increasing (in fact, quite the opposite is occurring), but because of the irreparable damage to integrity of, and confidence in the financial system that each bail-out creates.

Technically, the Gold Price has just overcome the all-time high of $850 set in 1980. We foresee a brief pause here before challenging $1,000 this year. Adventurous investors can find our All-Star Gold and Silver Juniors Report at www.goldmau.com.