END_OF_DOCUMENT_TOKEN_TO_BE_REPLACED

So, how's that S&P-gold ETF product working out for investors...?

AS MANY INVESTORS have learned recently, financial innovation comes with a price, writes Brad Zigler at Hard Assets Investor.

The cost of credit default swaps, for example, is opacity. Very few investors knew how the bloody things worked or how they'd behave under market stress, until they blew up.

Not all new financial products are time bombs, though. Some are simple enough to understand, but still require scrutiny by investors to appreciate all of their nuances. Take the recently introduced UBS E-TRACS S&P 500 Gold Hedged Index ETN (NYSE Arca: SPGH) for instance.

These notes – unsecured, zero-coupon obligations of the Union Bank of Switzerland's Jersey branch (that's the Isle of Jersey, not the Garden State) – are designed to deliver the combined returns of the S&P 500 Composite and long positions in nearby Comex Gold Futures. The notes accomplish this by tracking an index that equally weights, by way of monthly rebalancings, the equity and gold exposures.

The correlation between gold and blue chip stocks is historically low or, as now, negative. Presently, the rolling 30-day correlation between Comex gold and the S&P 500 is minus 24%. Thus, for now, gold provides the "zig" to an investor's portfolio, while the stock index delivers the "zag".

That's not always so, however. As you can see from the graphic below, gold and stocks are sometimes fellow travelers. In the early part of this year, for example, the correlation peaked and lingered at 80 percent – positive 80 percent. 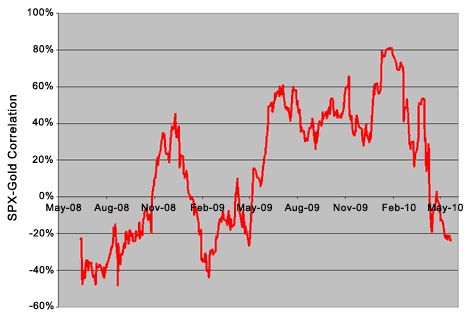 So there's your first caveat: Gold's diversification benefit is an ethereal thing. Sometimes it's powerful; at other times it's nonexistent and may, in fact, be a detriment, riskwise.

SPHG has just logged its 90th day of trading, so now's a good time to take a look at the notes' behavior to see if they're actually delivering a benefit that justifies their cost. At 85 basis points (0.85 percent), SPHG's investor fee – as exchange-traded notes go nowadays – is not the most expensive item on the market.

You have to wonder, though, if you couldn't do the same thing on your own by combining exchange-traded securities tracking the S&P 500 and gold.

After all, you can get the blue chip exposure for only 9 basis points through the Standard & Poor's Depository Receipts (NYSE Arca: SPY) or the iShares S&P 500 Index ETF (NYSE Arca: IVV). And Gold Bullion exposure can be had – without fear of contango, if without any gold ownership either – for just 40 basis points with an investment in the SPDR Gold Shares Trust (NYSE Arca: GLD). [Ed.Note: You can cut that to 12 basis points per year by owning physical Gold Bullion at BullionVault...]

So an equally weighted combination of the equity ETF and the gold grantor trust would effectively cost just 25 basis points. But would you get the same results with the "do-it-yourself" version?

Well, yes and no. Using SPGH's index methodology, which calls for rebalancing on the fifth business day of each month, the indicative values of the UBS note and the DIY package would have been virtually identical over the past 90 trading days. 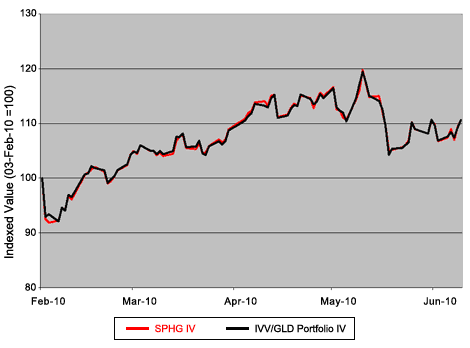 Unfortunately, exchange-traded notes don't always trade at indicative value. The more illiquid the note, the greater the disparity between its quoted market price and its indicative value.
The market for the SPGH note is especially sparse. Since SPGH's inception in February, only 712 notes change hands on an average day.

The IVV fund's net asset value has meantime declined by 0.19% since February, while the GLD grantor trust's value appreciated by 10.42%. Here, rebalancing served its purpose well, by producing an incremental positive return.

The wide spread between the apparent returns and the gains measured by the indicative values is largely a timing artifact. The iShares ETF and the GLD trust are two of the most actively traded exchange-traded products extant. There's typically very little time lapse between trades in either product. There are long gaps between SPGH trades, however. Sometimes the note won't trade for days on end. Even though the notes' indicative value is refreshed every 15 seconds, the last sale data disseminated by news vendors make the note look woefully out of sync with the market.

Spreads are wide in the SPGH market as well. At last look, there was a 1.4 percent gap quoted between the notes' bid and offer. IVV and GLD, on the other hand, are very tight markets, making realization of the indicative value return more likely.

The tighter spreads obtainable with the DIY portfolio have to be balanced against higher potential tax liabilities and commissions. At each monthly rebalancing, two commissions will likely be charged: one to sell shares of the previous month's outperformer, and another to purchase shares of the underachiever. Obviously, the SPGH note bears no such frictional costs, as there's no actual portfolio maintained.

The gains realized by rebalancing the DIY portfolio in a taxable account may increase an investor's tax liability, unless offsetting losses can be utilized. What's more, at least some of these gains are likely to be characterized as short term – and therefore taxed at ordinary income rates.

Perhaps the most important of SPHG's costs is that which can be discerned only by careful inspection of the note's prospectus: the call provision. Yes, these notes are callable at UBS' discretion. Similar to the iPath notes described in "Callable iPath Notes Chart A New Course," call protection lapses a year after issuance (in other words, Jan. 31, 2011). No premium will be offered by UBS; the notes are redeemable at their then-indicative value.

The call feature may also affect the notes' prices, especially when the call protection lapses. Arbitrage between the SPHG notes and their noncallable proxies – such as the DIY package we've examined – may force the notes to trade at an even larger discount.

So which is better, SPGH or the DIY package? It depends, of course. The DIY package has added tax consequences, but SPGH's call feature alone may make these notes unpalatable to long-term investors. In either case, be sure to do your homework, and run the numbers before investing.

Simply want to Buy Gold outright – and off risk for everything other than price – at the lowest costs possible? Start with a free gram at BullionVault now...