END_OF_DOCUMENT_TOKEN_TO_BE_REPLACED

GOLD SPENT almost the entire week above the psychologically important $1,000 level, writes Gene Arensberg in the Got Gold Report from Atlanta for Gold Newsletter subscribers.

Up to now, trips above that benchmark had been fleeting. A quick look at the two-year gold graph still paints a bullish technical picture, but some of the indicators we follow can't confirm that story...at least not just yet.

Breakout attempts are always dicey, always a little scary and they rarely launch higher without a significant retest of the breakout at least once shortly after the event. Trouble is, speaking on a very short-term level, that breakouts above important, long-established, historic resistance fail about as often as or even more often than they succeed.

Just as bullish interests now await gold to print something above $1,033 in order to press the upside, an entire boatload of other actors are watching the action ready at a moment's notice to pounce on the metal should the current breakout above $1,000 "give it up".

In order for the yellow metal to continue higher it will take buying, new buying and lots of it in order to overcome the intense amount of selling by the largest of the largest gold futures actors. Instead of blasting higher on massive short covering once it cleared the four-digit barrier, gold has set up a "high flag" and the most visible short side players are adding to their net short positioning in record amounts as if convinced that gold has more downside than the opposite. (Much more about that in the Gold COT section for subscribers.)

The most bullish of analysts are giddy and cocksure, certain that we have embarked on the next leg much higher. The usual cadre of veteran bearish market watchers are just as convinced that gold has reached stratospheric nosebleed territory and claim the short-Dollar trade has too many people on one side of the trading boat.

Meanwhile, most of the indicators we follow are acting the same way, as if they all now hail from Missouri and will wait to be shown that this is the "Big One".

Technically speaking, both the Gold and silver charts remain bullish, but unless the large numbers of new buyers show up soon, bullishness will very quickly morph into nervousness in the hottest of hot money that have joined the party in the wee hours of this breakout attempt.

Fundamentally speaking there hasn't been much to argue against a higher gold and silver price going forward. If anything the fundamental picture for the precious metals has been reinforced over the past two weeks since the last full Got Gold Report. Hasn't the US continued to act just like Japan did in the 1990s? Hasn't the US Dollar refused to bounce? Hasn't the current "captain" and "crew" Americans voted into power continued to show disdain and disrespect to our currency and our own business community? Near-zero interest rates, massive liquidity injections, enormous fiscal mismanagement by Congress, Dollar flight, Barrick closing 9.5 million ounces of fixed hedges, central banks now net buyers of gold, China encouraging its billion-plus citizens to buy precious metals and calling them "wise investments"...

We have enough material for this paragraph to run several pages, but the point is made already. 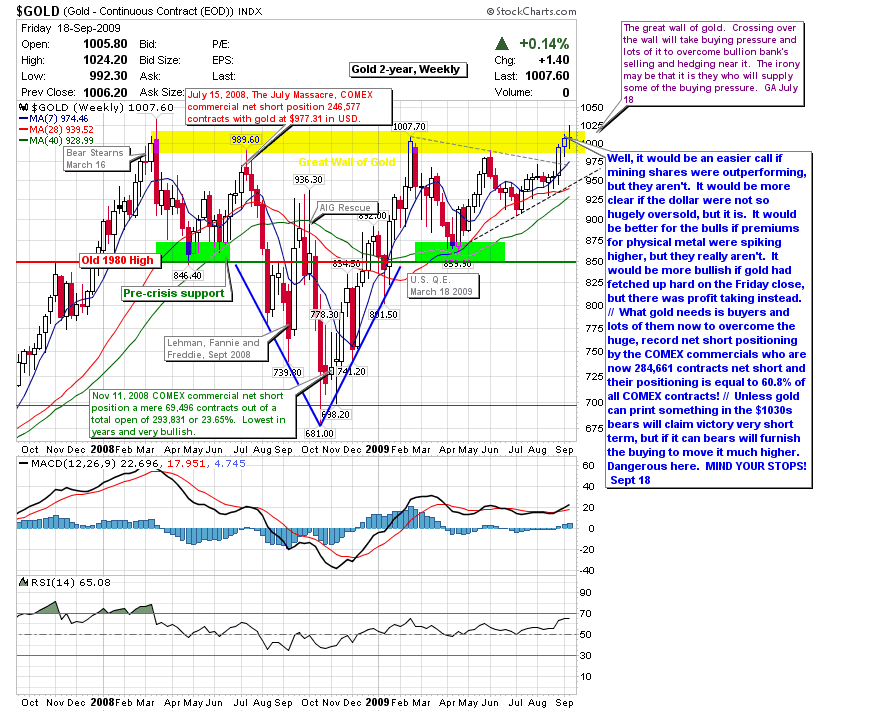 If the game were merely a case of looking at just the fundamentals, then that would eliminate much of the challenging part of trading. But fundamentals can be and often are trumped temporarily. Trumped by adverse liquidity. Trumped by short-term events or "interventions". Trumped by opposing mass psychology or even temporary "investor insanity". Eventually the fundamentals nearly always win out, but short-term there is always the most powerful driver of all to contend with: liquidity.

In the simplest of terms, it really is all about liquidity. Short term it is all about whether or not more wealth will be flowing into or out of the commodity or the issue one is trading. If money flow is strongly positive, the price will go higher and vice versa - every time. The challenge, of course, is to predict which.

We've already had a spectacular run and now enjoy bulging paper profits on our short term trading in gold and silver (assuming one remains on the long side). Many of the Gold Mining shares also exhibit highs or near highs. Paper profits are wonderful. "Green" is good. Let's do what it takes to make sure we keep most of the short-term trading "fun" now, in case this breakout goes into the books as merely an "attempt".

The only way I know to play attempted breakouts and to eliminate the guesswork, indecision and anxiety they can wreak on traders is to execute sound short-term trading discipline, which demands that short-term traders ratchet up their trading and trailing stops to a point just under the perceived breakout. Should the market catch fire and keep on going northward, they enjoy the ride, comfortably, and safely, moving their stops up along the way in trailing fashion.

But the idea is to pick the most likely point which marks the failure of the breakout, placing a good-till-cancel stop there to exit, because failed breakouts invite that cadre of professional sharks who exploit them harshly, automatically and violently if the market will let them. The perfect stop is immediately under where the short-selling pros will first show up in size.

For now [Sunday, 20 Sept. 2009] both gold and silver remain just above their respective breakouts in the most exciting, but dangerous locales in charting – the above-breakout "flag" formation. We'll go out on a limb here and predict that whichever way the flags break, there will be significant and immediate follow through.