END_OF_DOCUMENT_TOKEN_TO_BE_REPLACED

ONE BIZARRE OUTCOME of last Thursday's 15-minute Big Market meltdown is that it gave traders a scapegoat to forget the problems which had boiled to the surface in Europe and held all markets under pressure at the time of the "glitch", writes Gene Arensberg in his Got Gold Report from Atlanta.

"Oh, it was just a computer thing. Guess we can go play golf now..."

Wrong! The last thing an already nervous market needs is a confidence puncture, no matter where it hails from. Make no mistake, Thursday was a colossal confidence puncture for the NYSE and the NASDAQ. With red all over everyone's trading screens and a nearly constant bombardment in televised financial media of "sovereign default contagion risk", we can easily imagine that the panic plunge was a last-straw event – for some. Especially if Joe-Average-Investor was watching the events in real time, following the botched placement of a crude car bomb in Times Square.

We can imagine thousands of thoughts by ordinary, non-high-speed-computer traders out in the heartland thinking along the lines of, "Yikes. It's getting crazy again, I'm outta here! Martha, where's our broker's business card?"

We here at GotGoldReport.com are not normally swayed very much by conspiracy and "black helicopter" theories. Some of the wild "talk" out there on the web today regarding the computer trading in financial markets is so farfetched it is patently ridiculous.

Having said that, Thursday did bring to the fore the issue of just how fragile the amazingly complex computer-driven trading world might be. We don't think it is too much to worry that a cyber attack could trigger an even more disastrous market plunge – or a lot worse. All we can say is that we sure do hope that the honchos at the Big Markets are smart enough to hire the very best in the cyber-counter-intelligence department.

Over at the regulators of those markets on Friday, the Commodities Futures Trading Commission (CFTC) issued its weekly commitments of traders report. Bottom line? The Commitment of Traders report says those Gold Futures traders acting for gold-industry "commercial" players have little confidence in lower gold and silver prices.

GotGoldReport.com is focused on the changes in positioning of the largest futures traders in that report – the traders the CFTC classes as "commercial". We refer to those commercial traders as "LCs" for "Large Commercials". And for gold, as gold edged a net $2.94 or 0.25% higher to $1171.09 by the report's Tuesday cut-off, Comex commercial traders increased their combined collective net short positioning in gold (LCNS) by 6,064 contracts or 2.3%. 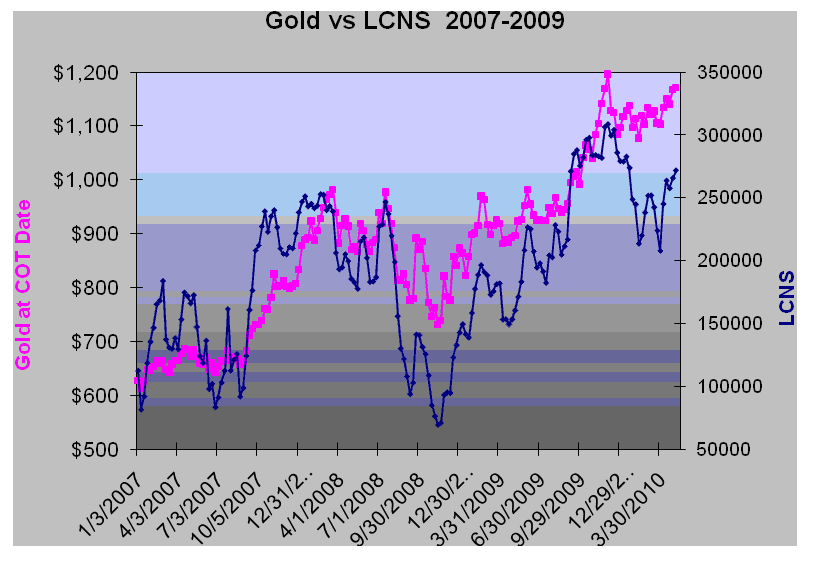 Remember that is as of the Tuesday close, and on that day gold traded to a low of $1,167.43 before recovering slightly into the close. Gold printed its Dollar-low for the week the next day, Wednesday, at $1157.55, but has seen extraordinarily strong bidding action since.

Indeed, we noted what we think is significant short covering style activity on both Thursday (in the $1170s) and again on Friday from the noon hour into the close (beginning in the $1190s). Recall also that the Wednesday attempted sell-down for gold (to $1157) was summarily stuffed and reversed back nearly $20 higher by the close.

Significantly, both Gold and silver ended the week in moderate backwardation. That means further-out contracts were slightly less expensive than near-dated metal.

We are frankly surprised that there was not more of an increase to the LCNS in this report. Even though the net change in the price of gold was tiny, with gold nearing $1200 one might think that the big industry-side players would be more than willing to take the short side of new long gold positions.

Our take away from this non-aggressive "large commercial" behavior is that the largest hedgers and short sellers of gold were just not all that inspired to take the short side of gold at the $1171 level. Once again, note that the increase in the LCNS is less than half the increase in the open interest – a very short term bullish signal.

Want to Buy Gold – not a derivative – and own it at minimal cost with 24/7 liquidity...? Go to BullionVault now...

A land developer, professional numismatist, self-taught bullion trader and investor since 1980, Gene Arensberg analyzes technical and fundamental developments in the precious metals markets. In 2000 Gene started sharing his own market research with fellow traders and fund managers. Those email reports evolved into his popular Got Gold Report, a biweekly look at important indicators for gold and silver published on the web. Gene's more in-depth market reports, insights and trading ideas are available at GotGoldReport.