END_OF_DOCUMENT_TOKEN_TO_BE_REPLACED

Beware the gold community's hysteria at talk of war...

IT HAPPENS when inflammatory events (usually political, terror or war related, but also including things like Ebola, Bird Flu and the like) crop up, writes Gary Tanashian in his Notes from the Rabbit Hole.

Stocks go down and hysteria starts to build. The mainstream media jump aboard and next thing you know you've got people heading for the exits...right into the next bottom.

In the case of the current corrective consolidation, a disappointment in the Trump administration's Healthcare follies rolled right into the war-like events in Syria and Afghanistan.

Presto! A much needed correction of the over-bullishness was on.

Going the other way is gold, which never fails to get the terror, war or pestilence bid du jour. Sure, the media may pump a bit here, but the real pumping comes from within the gold "community" (the term, coined I believe by James Sinclair, is a dead giveaway to group-think) itself.

The community always stands ready to explain to the greater public why it has been right all along; and headline-making events are held up as proof.

Now, back in a little place we like to call Reality, the stock market is still in the state it has been in since last year when we got a bullish moving average signal with the weekly EMA 20 crossing above the EMA 50.

My little speculation about a Left Shoulder to a potentially bearish H&S is just that, speculation at this time. The moving averages and the major trend say so. As a side note, notice that the AAII (Individual Investors) have been missing in action. They have been among the smarter of the dumb money for years now; but we might wonder if the final top will come when AAII finally takes the bait. 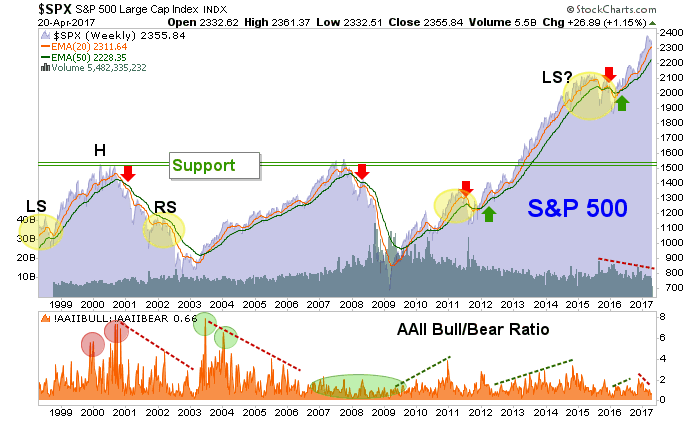 Our 'amateur cyclist' chart (for entertainment purposes only, folks) has instructed that a correction of some kind has been possible or even probable in and around here, according to the 12 month cycle. It's a monthly chart, so expect movements not to present themselves in the same time frames that our always-engaged human brains fire off thoughts and opinions. 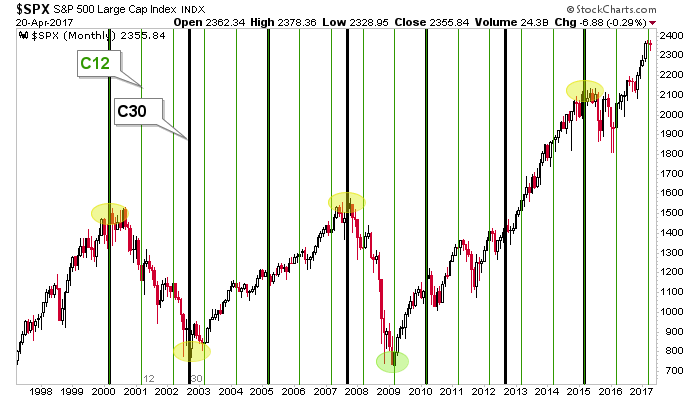 As for the sentiment reset at least in part provided by the gassing and Tomahawking in Syria, the MOAB drop in Afghanistan and the little nuke freak in North Korea, here is the status of the 'smart' and 'dumb' money (chart from Sentimentrader w/ my mark ups) aggregates, which have been more reliable than the AAII.

Our question in NFTRH has been 'mini or maxi?' with respect to the corrective consolidation in equities.

The SPX all but hit our long-standing target of 2410 on 'Peak Trump' day, which was the day after his first address to Congress. As you can see, previous 'mini' events terminated in 2016 at sentiment points similar to today's, while bigger corrections terminated with sentiment far more extreme to an over bearish alignment.

But the 2016 corrective events happened after the first chart above had given the bull trend signal, so it is possible, if not probable that this one can abort here and now.

Okay, so last week brought some tax reform jawboning by secretary Mnuchin and the market said "me like!" just as I am sure the administration wanted. Again, inflammatory events cut both ways. As bombs were lobbed, events temporarily worked for the bears, and so the administration's tax jawboning can be viewed as a potential trap for the bulls. News events do not drive markets beyond short-term knee-jerking.

But I do wonder if in the wake of the negative geopolitical events, as nerves calm down, the market will get back on its trend, which folks, is up. On the other side of the coin, while I have seen some technical and even fundamental positives brewing in the gold sector, we have noted a concern over the question of 'to what extent did the usual herds pile into gold at the tout of the usual promoters amid conventional bombings and the threat of the unconventional bombs being paraded down Main Street, North Korea?'

Gold, a simple barometer to economic health and to the state of money and financial systems, should not get caught up with the 'terror, war, pestilence...buy gold!' crowd (or the inflation/reflation crowd for that matter), but it does every time.

"It's a crisis hedge!", "It's an inflation hedge!", "Get in before India and China buy it all up before you can get yours!"

You'll get yours alright, if you react emotionally to gold.

Gold set a daily uptrend when it broke above its 200-day moving average and made a higher high to the February high. The rest of the precious metals sector, however, has not done so and is still a negative divergence.

If the yellow metal takes a down swing within this new uptrend gold players should be prepared to be thinking like predators, not victims (please don't start the blame game; gold always loses the war/terror bid as abruptly as it received it). The macro may be slowly shifting, but it has not changed yet. For the proper signals on that we'll watch the technicals and the fundamentals that actually matter, and even pull out my favorite illustrative graphic as needed going forward.

I am sometimes requested by subscribers to manage the precious metals sector more intensively, which we will do in NFTRH; but only when the time is right for it to be productive work.

To this point we've been in 'bounce only' mode until silver and the miners make a confirmation for gold, which got the war bid. Meanwhile, the precious metals are just another sector, no matter the righteous emotion packed into it by its most ardent proponents.

If the macro shifts and changes we will also manage the stock market's oncoming bearishness. But the time for that is not yet indicated either, so let's manage the market we have. It is still an intact uptrend in stocks, possibly aided by a sentiment reset due to the recent geopolitical events, and a forward potential (that word is important) for big changes in gold, gold stocks and silver.

The bottom line is that the market became disappointed over the lack of Healthcare reform, got spooked by bombs and then got the Mnuchin tax reform jawbone for a pop the other way. It's all noise. Stocks are big-picture bullish until the larger trends change, gold has begun a trend change to the upside, and the precious metals sector is still in non-confirmation mode.