END_OF_DOCUMENT_TOKEN_TO_BE_REPLACED

What are the risks of a US-China trade war...?

RISK is one of my all-time favorite board games, writes Frank Holmes at US Global Investors.

It's among the very few that's equal parts strategy and luck, and the stakes can't get much higher than total world domination. It wasn't uncommon for games between my friends and me to last for hours, sometimes deep into the night.

Today a real-life game of Risk is unfolding on the world stage, with major players moving their pieces into place.

As you probably recall, President-elect Donald Trump recently took a call from Taiwanese President Tsai Ing-wen, a decision that flies in the face of 40 years' worth of US-China diplomacy. Since 1978, the US has had no diplomatic relations with Taiwan after acknowledging the "One China" policy – a policy Trump says the US is not necessarily bound to.

His phone call and comment follow tough talk on the campaign trail about China manipulating its currency and stealing American manufacturing jobs – though bringing them back might be hard, as we've steadily been losing such jobs since the Second World War. 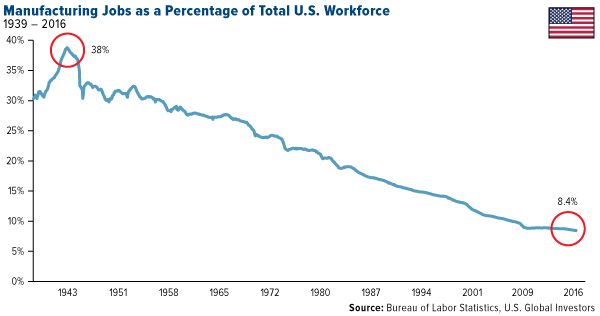 Trump has also threatened to impose an unrealistically high 45 percent tariff on Chinese imports, prompting US companies operating in the Asian country to fear "retribution."

For their part, the Chinese say they have "serious concerns" about Trump's position on Taiwan and international trade, with one state-run newspaper describing the president-elect as "ignorant as a child" in the field of diplomacy.

China's "retribution" could be coming sooner than we expect. Last week, a top Chinese official visited Mexico to strengthen ties with the Latin American country, which has also frequently found itself caught in Trump's crosshairs. Both countries – our number two and number three trading partners, after Canada – have expressed interest in lessening their dependency on the US, especially given the strong possibility that Trump could raise certain trade restrictions.

In the fight for American jobs, we could be "risking" a trade war with China right on our southern doorstep. Though the stakes might not be as high as total global domination, they come pretty close. With rates moving up and the world resetting to less quantitative easing, inflation might accelerate. To avoid a global recession, Trump will need to make streamlining regulations a top priority.

For only the second time since 2008 meanwhile, the Federal Reserve raised interest rates in mid-December, surprising no one. Although the 25 basis point lift was in line with expectations, markets took some time to digest the news that three rate hikes – not two, as was earlier expected – were likely to happen in 2017. Major averages hit the pause button for the first time since last month's presidential election, but the Trump rally quickly resumed the following Thursday morning.

The two-year Treasury yield immediately jumped to a nominal 1.27 percent after averaging 0.80 percent for most of 2016, an increase of 58 percent. In real, or inflation-adjusted, terms, the yield is still in negative territory, but it's clearly heading up following the US election and rate hike. Thirty-year mortgage rates, meanwhile, hit a two-year high. 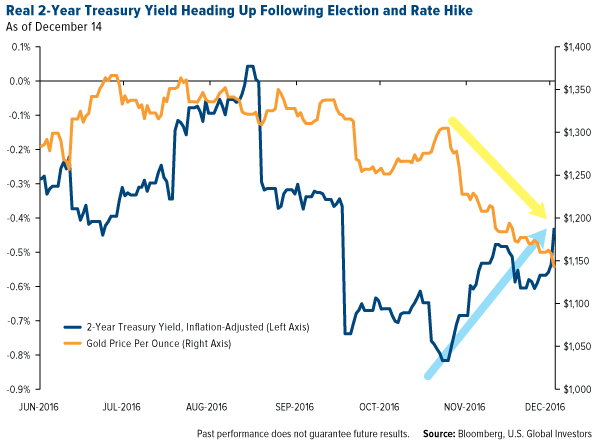 Gold retreated to a 10-month low. As I've explained many times before, gold has historically had an inverse relationship with bond yields, performing best when they're moving south.

It's worth pointing out that the most recent gold bull market, which carried the yellow metal up 28 percent in the first six months of 2016, was triggered last December when the Fed hiked rates. 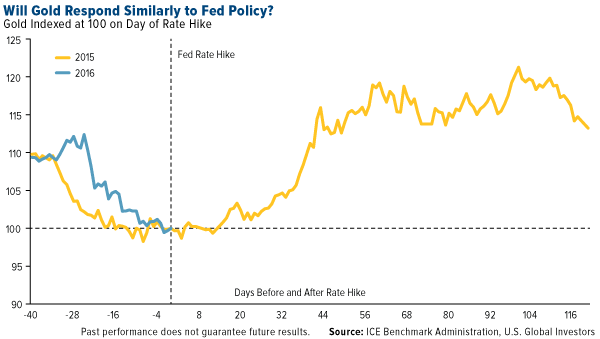 Again, as many as three rate hikes are expected in 2017 – unlike the one this year – with Fed Chair Janet Yellen commenting that economic conditions have improved well enough to warrant a more aggressive policy. If true, this should accelerate upward momentum of Treasury yields and the US dollar – currently at a 14-year high – which could dampen gold's chances of repeating the rally we saw in the first half of this year.

More Than $10 Trillion in Negative-Yielding Bonds
Other gold drivers still remain in place, though, including negative-yielding government bonds elsewhere around the world. The value of such debt has dropped considerably since the election of Donald Trump, but it still stands at more than $10 trillion, supporting the investment case for the yellow metal. And as I mentioned previously, many of Trump's protectionist policies – opposition to free trade agreements, imposition of tariffs on Chinese-made goods – are expected to heat up inflationary pressures in the US, which could serve as a gold catalyst.

What's more, gold is looking oversold, down two standard deviations for the 60-day period, which has historically signaled a good buying opportunity. With prices off close to 12 percent since Election Day, I believe this is an attractive time to rebalance your gold position. I've always recommended a 10 percent weighting, with 5 percent in gold stocks and the other 5 percent in bullion, coins and jewelry.