END_OF_DOCUMENT_TOKEN_TO_BE_REPLACED

Why have gold prices plunged since the US election...?

IF BEFORE the election someone predicted gold prices would tumble following a Donald Trump victory, they probably would have been met with a great deal of skepticism, writes Sumit Roy at ETF Trends.

If any asset were going to benefit from a Trump win, it would be safe-haven gold, according to the conventional wisdom.

But just as the conventional wisdom was wrong about stocks and bonds, so too was it wrong about gold.

Since the elections, it's been straight down for gold, which has lost nearly 4% of its value since Trump Tuesday. Prices fell as low as $1205 last week, the cheapest level since June. 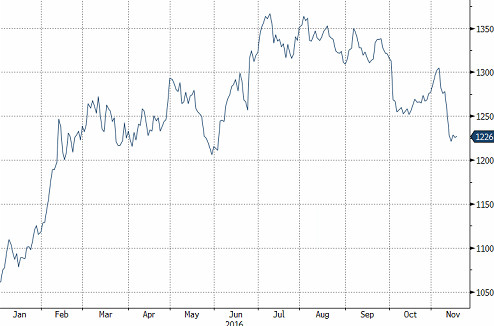 In the past two weeks, gold has faced two major head winds: interest rates and the Dollar.

Higher rates and a higher Dollar are a double-whammy for gold, which many investors see as a safe-haven alternative to Treasurys and sometimes even an alternative to the almighty greenback.

These bearish developments prompted some investors to lighten up on the hefty gold positions they had built up during the course of the year, pushing down gold prices. In the week since the election, outflows from the SPDR Gold Trust (GLD) and the iShares Gold Trust (IAU) totaled $1.7 billion.

Combined year-to-date inflows for the two funds are still at record-setting levels, around $13.6 billion, but the aftermath of the elections has clearly dampened enthusiasm for gold among ETF investors.

That's bad news for gold, because other than this year's unprecedented interest from ETF investors, there haven't been many bright spots for the yellow metal.

Through the first three quarters of the year, gold jewelry demand was down 18% from a year ago to its lowest point since 2009, according to the World Gold Council's Demand Trends Report released earlier this month.

Similarly, demand for gold bars and coins – another form of investment – was at the lowest levels since 2009. Central banks have been no help either, as they purchased 33% less gold this year than they did in 2015.

Put that all together and you have a gold market that's single-handedly been supported by ETF investors. Take that support away, and prices quickly retreat, as they did in the past week.

According to the WGC, the dismal state of gold demand outside of ETFs may be due to high gold prices around the world. Gold priced in Dollars is still relatively affordable, but gold priced in other currencies is much more expensive following the surge in the greenback.

Gold prices in India, for example, were at "near record" levels during the third quarter. Meanwhile, gold prices in the UK spiked within 10% of their all-time highs on the back of the plunge in the British Pound in Q3.

The renewed surge in the US Dollar against virtually all the major currencies following Trump's election certainly won't help make gold more affordable to overseas buyers. But if gold prices continue to pull back, perhaps consumers and central banks will slowly wade back into the market, lifting demand from its depressed levels.

In the meantime, gold prices will be driven by the whims of ETF investors. Those investors were spooked by the surge in interest rates and the Dollar brought upon by the election of Donald Trump, but there's no telling what they'll do next.