END_OF_DOCUMENT_TOKEN_TO_BE_REPLACED

At the least, 'taper' is hype and neutral where gold prices are concerned...
The MEDIA love to get a hold of buzz words and then give them a spin and a life all their own, writes Gary Tanashian in his Notes from the Rabbit Hole.
Recent examples were the mainstream media's presentation of 'Operation Twist' – which was simply an official yield curve manipulation designed to sanitize and dampen inflationary signals – as an inflationary operation, and the 'Fiscal Cliff' drama that sent herds of conventional investors to the sidelines when they should have been contrarian (and bullish) back in Q4, 2012.
Now we have the media on job tending the 'Taper' herd. Among the many hyped up implications of 'Taper' according to the media are that it is bearish for gold prices.
But I would put forth not only a rejection of that assertion but just maybe a call for the opposite; a bullish stance on gold in the face of a Fed being coerced by natural movements in the Treasury bond market to talk 'taper'.
As part of its QE operation, the Fed buys long-term Treasury bonds with newly printed money. It does so to try to keep interest rates down so that the economic recovery they have promoted does not fold in on itself, wheeze, roll over and die. They also buy distressed MBS, but this is a story about Treasury bonds.
As we noted back in May, long-term interest rates began bottoming, and then not coincidentally various Fed members began chattering in the media... and our latest buzz word was born. Ladies and gentlemen I give you 'T.A.P.E.R!' – the latest obsession for casino patrons to analyze to death.

Our long-standing target has been 4.2%, below which the 30-year yield now hovers. The red moving average is equivalent to the monthly EMA 100 that we have used for years in gauging the yield's limitations and hence its implications for the entirety of the macro markets. TYX is fast approaching its decades old limiter.

Switching to a monthly view of the 10-year yield, we see that it has registered its 3% target at a potentially limiting moving average. Yesterday's rise in 30 year yields and decline in 10 year yields could simply be a catch up move.
Regardless, our theme here is yields and gold; or more specifically yield relationships and gold prices. Gold tends to rise with a rising yield curve and decline with a declining curve. That is at least in part due to the inflationary signals implied by curve at any given time.
Is there any wonder why the curve dampening effects of Operation Twist and its inflation sanitizing signals attended gold's correction last year? 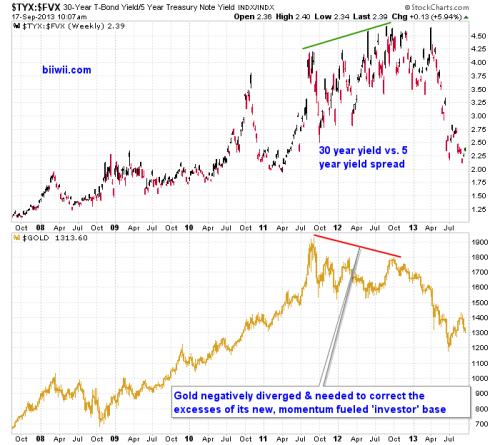 The long term view of the gap between 30- and 5-year US Treasury bond yields shows a mostly positive correlation with the Dollar gold price, save for a divergence in the 2011-2012 period. That divergence not coincidentally featured scores of people knee jerking into gold as a haven from the Euro crisis (as gold blew off) and the famed Operation Twist, which helped put pressure on inflation signals and hence, the yield curve and gold.
Dialing in to the micro term view of the 30-5, we see a potential bottom as longer dated maturities have risen in yield vs. short dated ones over the last couple of weeks. It is early, but a trend change would have to start somewhere.
What do they do when they taper? They buy fewer LONG TERM bonds. What would this do in theory? Put additional pressure on long term interest rates. In reality, I have my doubts and actually hold Treasury bond funds as a 'counter the hype' trade (yields are just about at our targets after all). But in theory a tapering would help put pressure on long yields vs. short yields, whether or not nominal yields are rising. That would theoretically pressure the curve upward.
So at the least, 'taper' is hype and neutral where gold is concerned. At most it is another pressure on an upwardly mobile yield curve, which is a driver of gold prices.
Summing it all up, I'd say that people should just tune out the hysterics and keep their eyes on the various balls that actually matter like the sentiment backdrops in gold, the stock market and especially Treasury bonds. They should watch macro fundamentals like gold vs. commodities and stock markets and they should watch nominal technicals across the board. We are doing all of those things and more in NFTRH.
Changes are coming to the macro markets and these changes may be symbolized by a group of eggheads meeting this week to render their policy decisions, but in reality their 'decisions' will have little impact on events going forward. It is B/S detector time folks and it is time to know what analysis is valid and what supposed analysis is just buzz words gone wild.
Any assumption made in the mainstream media between gold and tapering should be questioned and put to the analytical test just as a long line of ill-founded assumptions that came before it should have been. If gold's bull market is over, it is not because hyper-inflationists are not getting the QE they so crave and it not because of decisions that the clerks at FOMC are making this week.
Quite the contrary, what is going on in T-bonds could argue for the gold price bull's resumption.