END_OF_DOCUMENT_TOKEN_TO_BE_REPLACED

Biggest gold surplus in 10 years, best price rise in 8...
FALLING DEMAND meets record supply, says Adrian Ash at BullionVault.
Doesn't sound like a recipe for strong prices.
Yet that was the outcome for gold as the 2020s begin. If not the other way around.
Let's start with the numbers.
Last year saw total market supply set a new all-time peak.
Demand in contrast slipped by more than 2.0% from last decade's average...
...and within that sum, consumer demand sank to its weakest since the global financial crisis morphed into the global economic slump of 2009.
But the impact on gold prices? 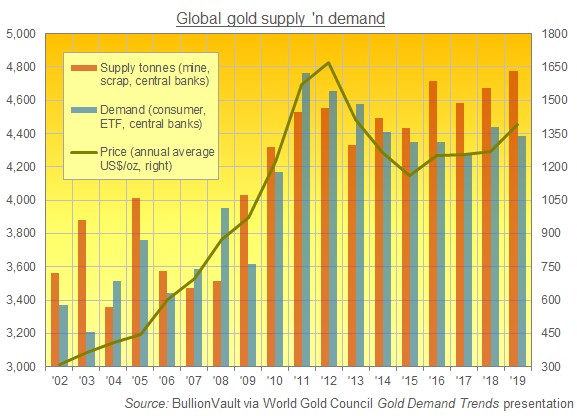 To repeat: Record gold supply last year met a drop in demand, with a nasty fall in how much consumers wanted.
Altogether, and via the best available data, this left the global gold market with surplus metal for the 6th year running.
Gold's largest glut since the 2009 recession in fact.
Yet in US Dollar terms, 2019 still brought the strongest annual price gain for gold since 2011.
More telling, last year also brought a raft of new all-time highs for gold-producer currencies such as the Australian and Canadian Dollars...
...plus, on the other side of the ledger, new all-time highs for gold priced in major consumer currencies led by the Indian Rupee, the Euro, and the Turkish Lira.
That's telling why? It's telling because, rather than price responding to supply and demand like Economics 101 might claim, those fundamentals appear to have reacted to price.
Gold prices went up. Miners kept mining. Existing owners took profit. New buyers held back.
That works, right? Higher prices caused gold demand to fall, supply to grow. Commonsense.
But, but, but. If gold supply outweighed demand, where did the excess go? And who was bidding up prices in this glut?
First, the data.
Several supply 'n demand consultancies have come...gone...reformed...or stayed in the gold market over the last couple of decades.
The most widely used and authoritative gold stats are compiled for and published by the mining industry's World Gold Council. Until 2015 it employed GFMS (today part of Refinitiv), now it uses Metals Focus. But their methodologies are pretty much the same, because the practicalities of gathering the data don't change.
Both sets of analysts, for instance – and like everyone else who's tried it – report demand for gold coins and small investment bars after accounting for what private investors sold back to the market. That's because investment gold retailers see both sides of that trade. So a net number makes sense.
But jewelry demand, in contrast, comes entirely separate from jewelry re-selling (known as 'scrap') in the GFMS, Metals Focus and World Gold Council figures. That shows up instead under 'Supply', because the flow is visible to (and therefore reported to the consultancies by) the gold refineries who re-melt all those bangles and bracelets, rather than the jewelry shops who see new sales.
Moreover, that scrap jewelry might be mixed with industrial recycling flows. So it can't so easily get broken out. Not unless we drive a truck through the categories. 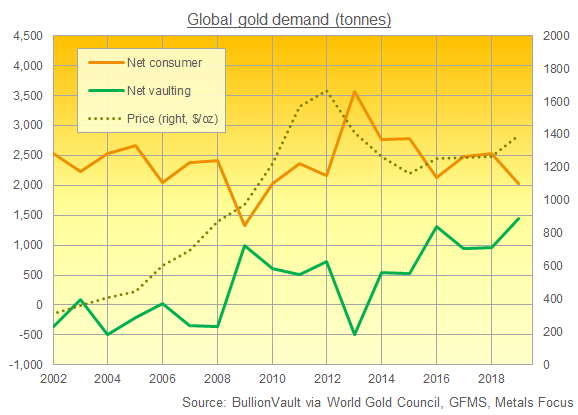 BullionVault's chart shows everything except mine supply. It then adds together 2 types of demand, all netted off from reselling flows.
So, see how our two types of demand mirror each other, albeit within a rising trend?
See too how the three strongest years for consumer demand came as annual average gold prices sank from their 2012 peak?
Also see how, in 2019, net demand for vaulted large-bar gold – the kind wanted by central banks, ETF trust-fund products, larger investors wanting outright ownership, plus bullion banks keen to stockpile metal against future investment inflows – set its highest level in at least 20 years, and very likely the most since the 1970s' bull market?
Sure, this is to some extent a thought experiment, if not quite a stab in the dark...a way of re-presenting the best available data just for the fun of seeing what falls out. You could find other ways of slicing and dicing the figures. It would great if our idea prompts lots more new angles.
But the fact remains that as total supply rose and reported demand fell in 2019, gold prices rose steeply.
Analysts as a group now forecast another strong year for gold's underlying price in 2020. If that comes to pass, odds are that – driven by weak economic growth, low interest rates, a possible turn in the stock market, plus continued geopolitical uncertainty – the quantity of securely-vaulted large bar gold will be growing.
You can get yours from as little as 1 gram at a time using BullionVault.