END_OF_DOCUMENT_TOKEN_TO_BE_REPLACED

Price rise sees jewelry scrap jump...
GOLD MINING output fell for the first year in over a decade in 2019 according to industry-leading data, snapping a run of new all-time highs and reviving talk of 'peak gold' among executives and analysts.
But total supply still rose to a new all-time high, thanks to 'scrap' flows rising by more than 10% as gold's sharpest price gain since 2011 spurred the heaviest reselling of jewelry in 7 years by consumers worldwide.
Figures from specialist consultancy Metals Focus say 2019 was the first year since 2008 that global gold mine production didn't grow – down by 1.3% to 3,464 tonnes – and the first year since 2009 that it didn't set a fresh all-time record.
Fewer discoveries plus a lack of investment mean global output could fall by 30% over the next decade, said Mark Bristow, CEO of No.1 stock-market listed miner Barrick, on a panel at the African Mining Indaba in Johannesburg.
"If we are going to see a decline in gold production," said John Reade of mining-industry group the World Gold Council, also speaking at last week's conference, "that's certainly going to be positive for investor sentiment."
Gold prices rose 9.8% in US Dollar terms across 2019, and set new record highs for miners in major producer countries Australia and Canada, as well as for buyers in major consumer countries India, Germany and Turkey.
That spurred a surge in gold sales from existing household stocks. Added to mine output on Metals Focus' data, that took total global supply to a new record, topping the peak of 2016 on gold's surprise rally after 3 years of falling prices, and before that the current all-time US Dollar price peaks of 2011-2012. 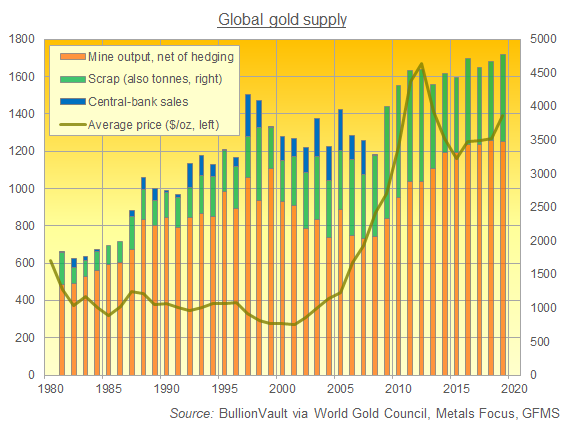 Competitor analysts Refinitive GFMS meantime estimate that 2019's global gold mining output in fact grew from 2018, expanding by 2.6%.
Metals Focus itself has in the past made significant upwards revisions to its historic figures, with the consultancy's latest data – compiled for and published by the World Gold Council – adding more than 4% to its previous estimate for 2016-2018, revised to account for a surge in less-easily tracked output from so-called artisanal, small-scale projects (ASM).
Operating outside the formal gold-mining industry, ASM sites usually operate on an informal basis, outside the law. So while artisanal mining "provides a livelihood to millions of people, often in poorer countries in South America, Africa and Asia," explains Reuters, "it often leaks chemicals into rocks, soil and rivers.
"Working conditions can be appalling, and the gold such mining yields is often smuggled or used to launder money."
Major Swiss gold refiner Metalor – owned by Japan's Tanaka group – said last June it would no longer accept any artisanal gold, closing its South American operations in Colombia and Peru after already ceasing to accept ASM doré from Africa in 2015.
But the world's leading gold bar refineries should work to develop and accept gold from ASM or face ever-tightening supply from the formal sector, standards-setting authority the London Bullion Market Association told its industry-leading conference in October.
Western gold-mining firms have "struggled to discover enough resources to maintain [their level of] reserves," the World Gold Council's John Reade says, "and new projects coming online have been strangled a bit by the lack of capital going into the sector over the last decade."