END_OF_DOCUMENT_TOKEN_TO_BE_REPLACED

Even the most bearish price forecast is bullish...
GOLD PRICE gains of 10% from last year will be more bettered again in 2020, according to industry body the London Bullion Market Association's survey of market analysts.
On an average annual basis, gold priced in the Dollar recorded its most bullish year since 2011 in 2019, rising 9.8% to $1392 per ounce.
The average annual price now forecast by the 30 analysts entering this year's LBMA Forecast Survey competition comes 12.0% higher again at $1559 and driven by political and economic uncertainty.
Repeated Survey winner and now independent analyst Ross Norman projects gold will touch a new all-time high in 2020 of $2080 per ounce – some $300 above the next most bullish top, forecast by Frederic Panizutti of Swiss refining group MKS Pamp.
Last year's joint gold-price winners – Rhona O'Connell of brokers INTL FC Stone and Rene Hochreiter of South Africa's Noah Capital Markets – see gold averaging $1590 or $1670 respectively in 2020, a rise of 14% or 20% from last year's annual level.
Most bearish is 2015 winner – back when gold prices set their lowest annual average since 2009 after 3 years of falling – Bernard Dahdah of French bank Natixis, who predicts a low-high range of $1300-1450 with an annual average of $1398.
That would still represent a $6 rise from 2019's average level however, the first year since 2011 that the Survey's lowest forecast has come above the prior year's annual average.
Over the last 15 years, the gold price out-turn has fallen outside the range of highest-to-lowest annual average forecasts only twice, first when analysts were caught out by the depth of 2013's crash, and then by the surge of 2016. 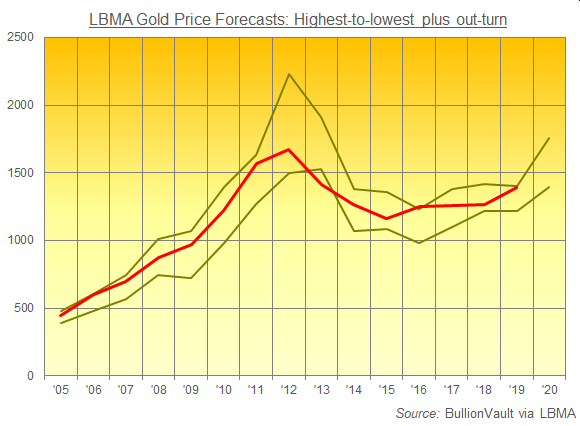 "The biggest downside risk in our view is if holders of physically backed gold ETFs offload investments," says Dahdah.
But "in this complex environment" of weak global growth, Middle East tensions, and a US election year, "gold shall remain an asset of choice against market risks," says MKS' Panizutti.
Norman goes further, explaining his average forecast of $1755 – almost $200 per ounce above the consensus outlook – by saying that 2019 showed central banks "are locked into QE forever", enabling record-high debt levels with stock markets now "massively overvalued.
"Financial markets are trapped, and we expect gold to respond by hitting an all-time high in H2 2020."
Winning the 2019 forecast for palladium, Norman has now taken 7 first places in the LBMA's Survey competition, matching the top-prize count of Hochreiter.
"Gold is expected to be in for a volatile year in 2020," says the LBMA's commentary, noting that the gap between the lowest-low and the highest-high forecasts gives a range of $780 compared to $325 last year.