END_OF_DOCUMENT_TOKEN_TO_BE_REPLACED

Right on the pumping-crowd cue, too...

YOU MAY know me as the Macro gold guy, writes Gary Tanashian in his Notes from the Rabbit Hole.

The guy using the planets of an imaginary gold sector Macrocosm with proper fundamentals that are decidedly not imaginary but rather, are necessary to call a real bull phase or even bull market.

By managing a strict set of macro and sector fundamental inputs (to the sound of crickets and little else in the sector) NFTRH and its subscribers had a front row seat to the now obvious gold mining launch as first the fundamentals came in line, followed by the technicals.

The reason this needs to be highlighted is because there is a popular Elliott Wave analyst out there (among a few others) talking about how it's all in the wave counts (unless they are revised, as often happens with EW) or other technicals, and fundamentals don't matter. As if the answer is all technical and sentiment based.

Well, those two things are important, but please. As happened in dramatic fashion when we became super bullish in Q4 2008, the fundamentals kicked in first and gave a green light to taking technical signals more seriously along the way. Look, I am a TA too, but The Men Who Stare at Charts exclusively are pitching only half the story.

It was time to start becoming bullish back in November. Gold mining stocks (HUI) then rallied into February. The pumping by some in the gold community had then become too vigorous, and we turned highly cautionary on the gold bull horns. The sector promptly got hammered.

Okay fine. We had a couple of good calls. What have we done lately? Well, lately (June 3rd) a subscriber update noted the Nature of the Gold Stock Launch.

"The pullbacks will come and they will be harsh. But if this is a launch, as would be indicated by the fundamentals slamming into gear, it's a buy/add the pullbacks situation. I'll be keeping a close watch on the funda because if they remain strong I'll remain strong. If not, I won't. Right now they are strong and this launch from support reflects that.

"For reference, a similar thing happened in Q1 2016 as the sector launched hard, but by late spring that year we were noting degrading fundamentals and the rally ended not long after. Let's not see that happen this time and then maybe we can get a real and sustainable move out of this. We'll track the funda ever so closely moving forward."

On Tuesday of last week an NFTRH update alerted subscribers the day before the pullback (whether it turns out to be mini as it currently stands or maxi to key support levels).

"We noted the overbought status of daily GDX. The weekly chart was also getting overbought. This leg has been vertical, after all. That is impulsive and it is the next phase of the launch we talked about a few weeks ago. But if we are going to a higher 'C' leg well above the 'A' leg from 2016 (as noted for HUI by a monthly chart in NFTRH 557) it would be best for this thing to take a fuel stop."

And here we are at the fuel stop. Gold and the miners are still very overbought and while it is noise rather than fundamentally important, the US/China trade talks could have a say in whether gold and the miners lose more of the momentum players that knee-jerked aboard recently or continue on after only a 'mini' pullback/pause.

For example, if the US/China trade news were to pump the stock market too aggressively it could put a temporary ripple in one of the actual macro fundamentals for the gold sector, Gold/SPX ratio being a big one.

As long as the fundamentals remain intact I'll remain strong and NFTRH analysis will remain on message, gauging overbought situations and plotting pullback/buy levels on daily and weekly chart time frames. But as to the 'C' leg noted above, if fundamentals and technicals stay married we are going a lot higher in the bigger picture even if only for an A-B-C bear market re-trace (small cyclical bull). It's not yet time to talk about a major new bull market. 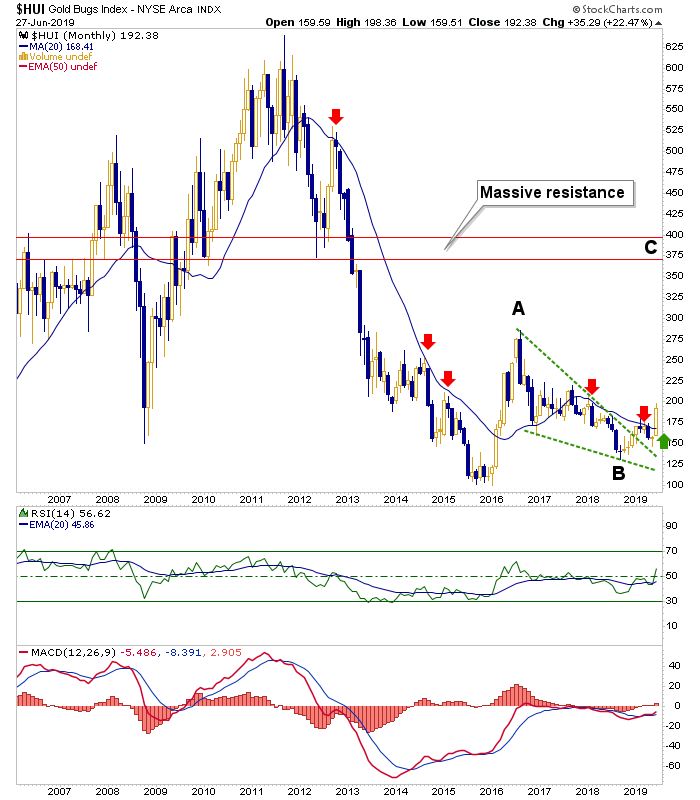 Meanwhile we plot the probabilities for traders and bigger picture macro backdrop for investors. No hype, just probabilities; refined and enhanced as new fundamental, sentiment and technical inputs come in. You could call it a more touchy feely method of management or you could call it a more comprehensive method of management. I call it something that works.