END_OF_DOCUMENT_TOKEN_TO_BE_REPLACED

AS WE step toward a counter-cyclical macro, the fundamentals will finally improve for gold mining, reckons Gary Tanashian in his Notes from the Rabbit Hole.

From a June 19th interview I did with Jordan Roy Byrne with respect to gold stocks, energy and the proper macro fundamentals for the gold mining sector:

"In my experience gold stocks will...they can paint ugly charts and then follow through on those ugly charts. But when a crash finally happens it's almost poetic in that it's like the final surrender of the inflationists. The ones who were packed in the sector for the wrong reasons because...'buy gold, buy silver, buy hogs, buy copper, buy oil'.

"No. You buy gold during weakness and when it would look forward to the new easing...of policy makers. The new dove regime or whatever. But it happens amid deflationary pressure. That's the best buy for...well, often for gold and usually for gold miners. So the important thing to remember about gold mining as an industry is that it leverages gold's standing in the macro. Gold will not usually move nearly as violently one way or the other, but if it is rising vs. especially mining-cost commodities like Energy and Materials then that's usually happening during a deflationary episode or waning liquidity, market liquidity episode and yet fundamentals are improving and that's when you buy.

"Unfortunately, the moves in gold stocks can be so violent that often you're buying a crash. So in 2008, Q4, I bought the crash at HUI 250 and then those knives went right through my palms and I bought again at 150, which was finally the bottom. So you have to be careful, a crash always goes lower than you think it will. And again I have to say I am not predicting a crash for the reasons we talked about where, you know, it's possible enough pressure has been taken out of the sector in favor of other greener, more inflated pastures like Energy and until recently some of the Materials sectors, specialty Materials and whatnot.

"Conversely, gold miners also leverage gold's standing when it's negative. So the correction from mid-2020 to basically today has taken place with gold declining really significantly in relation to oil, to broad commodities, to many individual commodities. But that has started changing and I see the Energy complex now as the last inflated man standing. And when that man gives up, if he does, then it's time to really be a gold stock bull, but that doesn't mean run out and blow your...ah, you know, your cash right away because you need to realize that a lot of people will sell at precisely the wrong time and ah, it's not the most liquid market in the world to begin with, so that can create violent downside."

Well, you know I am not just reporting the news of the day as many market analysts do because this interview is 3 months old and is living proof to the public (NFTRH subscribers have been apprised of the details every step of the way) that there is value in looking ahead.

Not making predictions, but instead making logical assertions, revising them if needed or if they need no revision, as per the views above, leaving them well enough alone. It requires patience, because the markets may come to a final resolution in a day, but getting to a point of mass capitulation can be like watching paint dry before things start to get exciting.

Things may well be getting exciting now. Thank you FOMC, the policy arm of the tardy Fed, whose rear view mirror made it too late to fight inflation and is going to make it be too late to get off its hawk routine.

See for instance the as-yet unbroken but torpedo stricken Energy sector. Crude Oil got hammered, and here is how that translates to the Gold/Oil ratio, probably the most important sector fundamental consideration for gold stocks.

It's still a major downtrend in Gold/Oil, but it sure is constructive. 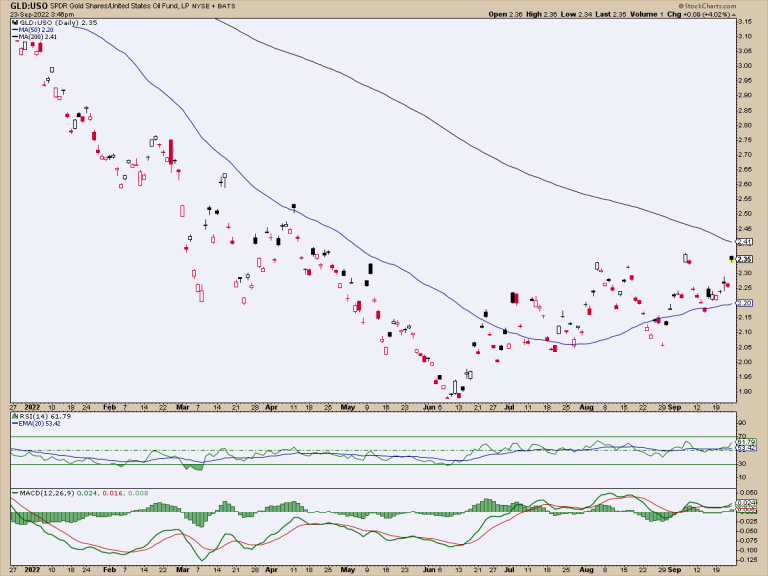 Since we are looking at pretty pictures, let's also view the Gold/SPX ratio (GLD/SPY), which was provided to subscribers in an update. Where Gold/Oil is a sector fundamental, Gold/SPX is what I call a macro fundamental, which would eventually influence mainstream investors in favor of gold stocks.

Here is the chart from that update. It's amazing when you consider that the gold price is getting hammered as well during this year's 'running of the inflationist gold bugs' spectacle. 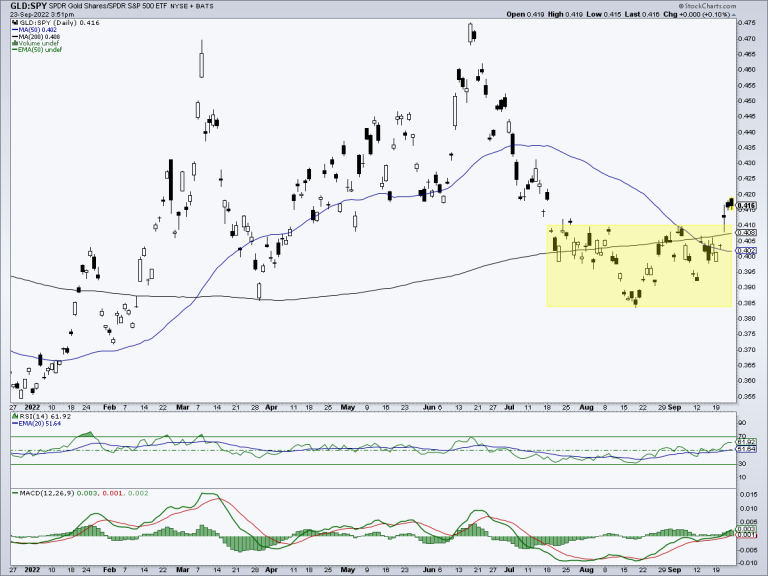 Pattern nerds to attention! Ah, but this inverted Head & shoulders pattern is one part technical potential and one part hallucination by people who want to see pretty things in their charts. What is not a hallucination is the ratio's state above the moving averages and at a new recovery high from the August low.

Bottom line? As in 2008 there is the potential for a final tank job in gold stocks. I sliced my hands open buying at the first major support back then, at HUI 250. Then I finished buying a hundred points lower, blessedly at the bottom.

That was a deflationary episode and today the Fed, with the 'hawk until something breaks' mandate it has set for itself in order to slay the inflation problem that it was the primary agent in creating, is seeking something similar. Maybe not as intense, but maybe so.

As I've parroted through the entire precious metals correction that began so long ago with the alarm called 'Buffett and the 3 gold promoting stooges' of summer 2020, cyclical inflation is not a reason to buy gold stocks. Indeed, it's a reason to avoid them as other areas benefit much more during such phases. Anyone who has touted gold stocks from August 2020 to today has identified themself as a perma-promoter to a trained eye.

In the current situation gold stocks are not necessarily fated to crash and indeed, we have had a short-term HUI target that was identified back in August. The sector is in its 3rd year of correction, but it is also in its 7th year of a terribly volatile and difficult bull market from the 2016 low. So as noted in the June interview above, it may well have had enough pressure released over that 2+ years to avoid a crash scenario.

But as I noted in the interview, a crash scenario may also still be in play. We have other downside objectives should that be the case. I look forward to transitioning the narrative in NFTRH, where we are no longer looking for confirmation of the macro falling apart ('last inflated man standing' takes a key hit), but planning how to manage what comes next.

Frankly, I have greed flowing through my veins now. We worked hard to be in such a position. Now it is time to get it right with respect to the new phase that is ahead. Time to tune out unhelpful analysis, all the noise that comes with it and just listen to the macro.