END_OF_DOCUMENT_TOKEN_TO_BE_REPLACED

The REAL fundamentals that matter for the gold-mining stock sector must be in line at the beginning of a real bull phase or bull market for the sector, writes Gary Tanashian in his Notes from the Rabbit Hole.

I make that point with the example of Q1 2016, when a very powerful gold stock "launch" erupted. But in Q2 of that year we (NFTRH) were already advising in public about a degrading of those fundamentals.

What had happened in 2016 was that gold bottomed first, followed by the miners and silver. But then the whole raft of cyclical assets (commodities, stocks, etc) bottomed and turned up. A cyclical party soon regenerated and the counter-cyclical gold stock sector was sent back to the hell it came from.

So again let's take a look at our visual that roughly represents the correct macro backdrop for a bullish fundamental view on gold stocks. The larger the planet, the more important the fundamental aspect.

Gold/Commodities should be a somewhat larger planet but work with me here...

Add in the important component of the Fed and its increasing odds of 2019 rate cuts and well, you've got the right backdrop.

This undervalued sector (as we've been noting for months in NFTRH using unique comparisons of the gold/commodities and gold/oil ratios to the HUI index) looks set to finally gain traction in the eyes of the wider investment community.

The pullbacks will come and they will be harsh. But if this is a launch, as would be indicated by the fundamentals slamming into gear, it's a buy/add the pullbacks situation. I'll be keeping a close watch on the funda because if they remain strong I'll remain strong. If not, I won't. Right now they are strong and this launch from support reflects that.

Unfortunately, all too many people are obsessed with inflation as the key fundamental for gold and worse yet, gold stocks. That is a pure canard and anyone pounding the table on cyclical inflation as a reason to own gold or the gold miners that leverage gold's relationships to cyclical assets is guiding incorrectly.

Is it any wonder that so many have been routinely put off sides since mid-2016?

I have stated my case (and it's a case put forth by a few quality others, most notably Bob Hoye) consistently and continue to do so. If the real fundamentals erode I'll become weak on the sector. But that is not what is happening currently and so I am strong on the sector (and have waited a long while to be able to write that).

So this gappy "launch" on volume is nothing to fear. Vertical? Yup. Impulsive? Yup. Pullbacks to come? Oh yeah. Something to fear? No, not as long as the macro and sector fundamentals remain in line. 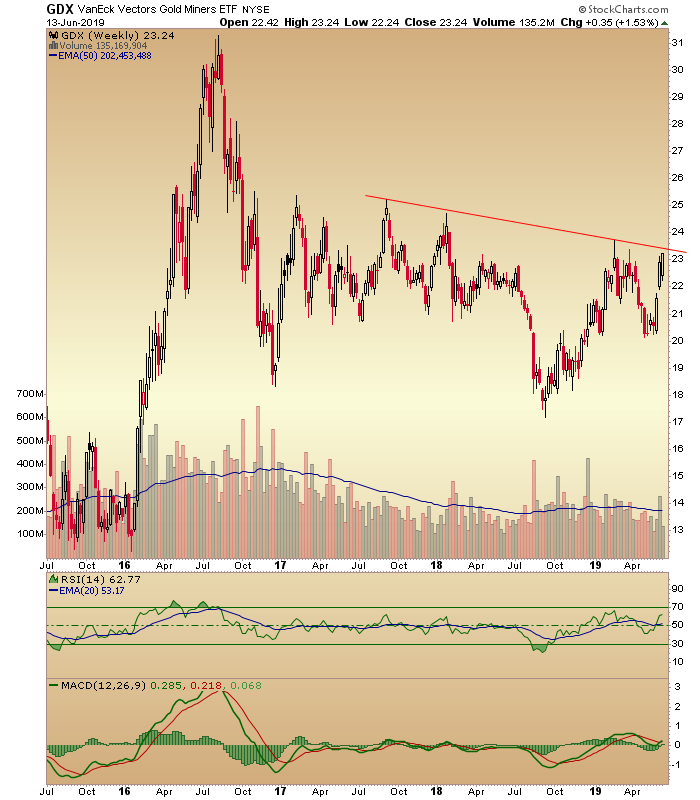 This weekly chart of the Van Eck GDX gold mining ETF shows a point that might bring on some volatility. But again, if the fundamentals remain in hand volatility is your friend, not something to fear.

Unfortunately for inflation-focused would-be gold bulls, nothing makes sense right now in the current disinflationary environment and so they will be paralyzed by confusion.

Meanwhile, I look forward to charting the best gold stocks I know of each week in NFTRH, from daily and weekly time frames along with the key fundamental charts and sector indicators. We've been waiting a long while for this and if those fundamentals stay in hand it's going to be a rewarding 2019.