END_OF_DOCUMENT_TOKEN_TO_BE_REPLACED

Bad money is driving up shares and good money is going to gold...

That's the short version of Gresham's Law. What it really means is that people interested in self-preservation don't follow trends. When inflation runs amok in financial markets or in the economy, prudent people tend to hoard what's valuable. They spend what's less valuable before it becomes even more devalued (paper money).

The Daily Reckoning submits that a version of Gresham's Law is at work right now among the world's managers of large pools of money. The valuable stuff is disappearing from circulation while the frenzy in the paper stuff gets everyone's attention.

But let's not be coy. What exactly do we mean?

Gold holdings by exchange-traded funds and products declined by 16% in the first quarter, according to Bloomberg. The SPDR gold fund (GLD) has seen redemptions of 303.7 tonnes of gold this year. It's down to 1,047 metric tonnes, as George Soros and other institutional investors sell.

The institutional side of the gold picture is getting easier to understand: sell gold and buy stocks. Yesterday we showed you the 45% year-to-date rise in Japanese stocks. But before Abenomics became popular, hedge fund manager David Tepper of Appaloosa Management went 'balls-to-wall' on US stocks in September of 2010. 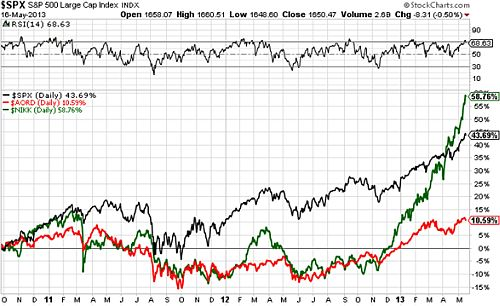 The important point to make is that front running the money printers is just a form of Gresham's Law. You're not investing any more. You're betting on higher asset prices. That bet doesn't have anything to with the value of securities. But if it's a bet on the direction of asset prices, it doesn't have to.

Everyone's joining in on the bet now. That's one way of looking at daily all-time highs on the S&P 500 and gold retesting levels it last saw in February of 2011. Stocks aren't money of course. But then, the ETFs aren't gold either.

Anyone who bought gold through an ETF in the last two years was betting on rising gold prices. That looks like a bad bet now. A stronger US Dollar (relative to the other fiat currencies) caps the gold price. But the Tepper trade is now being taken up by all institutional traders and investors. The ETFs made it easy for the institutions to buy gold. But they've also made it easier to sell it.

Let's be clear though. If the exchange-traded gold funds are facing redemptions, all they're really redeeming is units of the E.T.F. People sell those units for cash, not gold. The trust sells the gold to raise the cash. What's really worth paying attention to is who buys the gold at E.T.F. sells.

Right now, all the buying is on the retail side. Institutions have to chase returns. That's what makes them trend followers, inherently. Retail investors are not compelled to be blind trend followers.

When you're managing your own money, you have the luxury of independent thought. You make decisions based on what's best for your wealth in the long-term, not what your returns will be this quarter. In Hong Kong, retail gold buyers are thinking that they're happy to buy physical gold at these prices, even if it means paying a premium over the spot price.

"Gold bars in Hong Kong," reports Reuters, "fetched premiums of up to $5 an ounce over spot London prices, driven by tight supply and strong demand from China, the world's second-largest consumer after India." Premiums were around $3 last week. And there you have it.

In the retail physical market, buyers are queuing up and paying a premium. Meanwhile, the institutions can't sell fast enough in order to buy something that's going up in price (stocks) because of QE. As one dealer in Singapore said, "Honestly, we don't have enough physical gold to supply to the Chinese. I just heard one Hong Kong party is quoting premiums at $6. This is mad."

There is a philosophical issue buried in here somewhere too. As Goto Dengo said in Neal Stephenson's Cryptonomicon, "Gold is the corpse of value." It's a way of freezing your purchasing power in a bar of inert metal in order to liquefy it later when the world is safer. Gold is value in suspended animation.

In a growing, healthy, productive economy, you're probably better off owning shares in enterprises that create value. But you would have to be a CNBC anchor to say that US stocks (or Japanese stocks for that matter) are rising because corporations are suddenly creating more value. That's not happening. Bad money is driving up shares and good money is going to gold.

Another way of putting it is that the currency war is forcing investors to take a side. You're either with stocks, or against them. Gold doesn't have a yield and neither do most government bonds anymore. Central bankers have eliminated the spread of assets competing with equities. By doing so, they've produced a rally in stocks which they hope will precipitate a recovery in the real economy.

They need the recovery because the only non-catastrophic way to deal with the big public and private debt overhangs is to grow it out of it (with a little inflation salted in). If they can't print their way to a recovery, then the whole model of creating prosperity through money printing is exposed as a giant fraud – which is exactly what it is.