END_OF_DOCUMENT_TOKEN_TO_BE_REPLACED

Inflation coming. Or says the HUI...
IT GOES without saying that gold miners and the royalty companies that live off them will be shown, due to shutdowns, to have been impaired like many other companies by the coming Q2 numbers, writes Gary Tanashian in his Notes from the Rabbit Hole.
An emailer questioned my view on this and it has been one of my personal caution points. Markets should be looking ahead, but during this euphoric sentiment release across broad markets maybe they're overlooking some things.
The other caution point is that a big bullish expression on the heels of the Fed announcement is also a setup for short-term disappointment.
But lately a new thing is happening. My stock market positions are making gains. My precious metals positions are making bigger gains. I am enjoying managing the process and scaling in after not really losing much (-5% at the worst of it, thanks to strict risk management) during the broad crash. It has been an opportunity to buy (and trade) premier stocks with strategic fundamental setups for the post-pandemic economy.
As for precious metals stocks, the only reason that my portfolio touched -5% at one point was because there were three stocks, two explorers and a producer, about which I said to the market "eff you, drive 'em lower and I'll hold and/or buy, but I'm not selling".
Well, the market sure did drive 'em lower and I increased positioning in two of them to bring them about even in committed capital with the other one.
But now the gold miners are leading the broad markets (with the HUI gold-miner stocks index having impaled its 50- and 200-day moving averages to the upside) in their role not as inflation vehicles but as the "gatekeepers of the transition to inflation". It is time to be fanning out to other positions, which I've been doing while also trading. But the idea, once the new trend is established, is not to trade yourself silly but instead, to be positioned in the best miners, explorers and royalty streamers.
On Thursday HUI made a strong signal that it is time to be anticipating the changing of the short-term trend back to up, joining the still intact long-term view (see monthly chart, second one below) of a bottom and upturn. This move back above former support (that had become key resistance) is as Captain Obvious would say, significant.
During the crash we noted in real time that some annoying gaps were being filled and if you know about gaps, you know it's usually better to get them cleared out. There is one gap left from longer ago at a much lower level, that has seen its relevance diminish lately, especially on good Thursday. As for Thursday's gap, it's a consideration but if it changes the trend back to up (as a breakaway gap) as expected, it need not fill any time soon. If it does fill it would very likely be a buying opportunity.
Here is the daily chart we used to micro manage the crash and recovery process in NFTRH updates and in-day notes. The ultimately bullish A-B-C correction scenario appears to be playing out as projected in the depths of the crash. It felt like no sure thing at the time, but it was a guide to a very viable outcome. 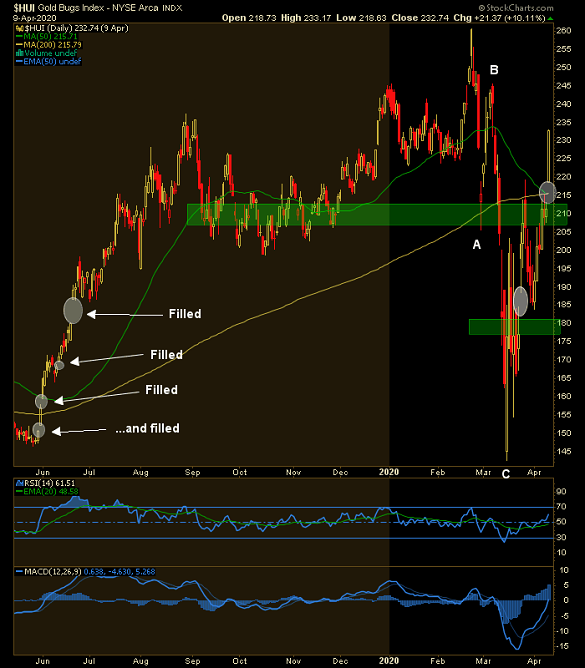 For reference, here is the monthly chart we've used for over a year to keep technical perspective on the bottoming process and potential new bull market. See those lower panel indicators? They're all green and but for a little dip below 50 by RSI, have remained that way all through the 2020 deflation scare. 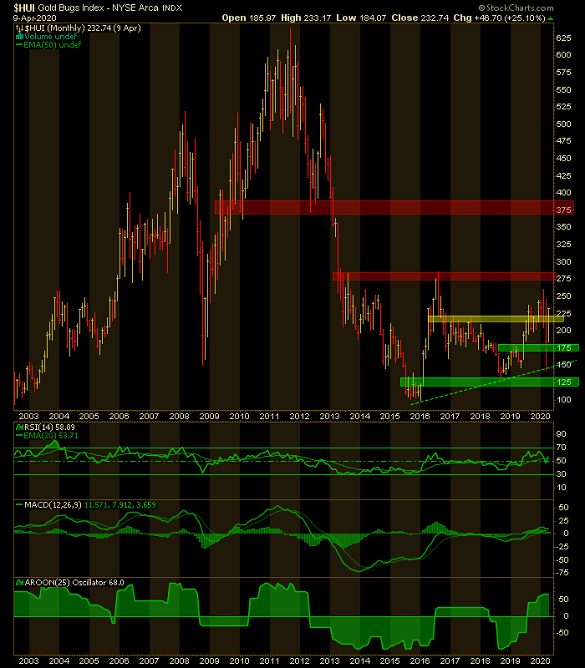 So the gold stocks lead the way and lead the huddled masses out of a deflation scare and into the next inflation. I have pounded you for years about this and I have shown you cartoons like the Macrocosm (of the best buying environment for gold stocks) below to make my points. Gold stocks are not about inflation and you should tune out the inflation bugs with extreme prejudice because they were the ones giving up the ship during the deflationary crash in March.
With respect to the note on the upper left side, the Macrocosm does need an asterisk in this case because in this case the pestilence du jour, Covid-19 has led directly to human suffering including prominently, economic suffering. The play is that in a deflation scare you buy gold stocks, which quite simply are leveraged to gold's standing vs. a world of cyclical assets positively correlated to economies and/or inflation. The Treasury/Fed 2-headed monster is inflating once again and the gatekeepers of the future scourge of inflationary effects are moving first and best. It's 100% as it should be.

Some day, when inflation expectations are out of control (I am projecting this for as early as 2021) and some lazy analysis is telling you to buy gold stocks to protect yourself from the readily obvious inflation you will know to avoid the promoter of that lazy analysis. Widespread promotion of that sort will signal the latter stages of the gold miner bull phase (ref. 2007, 2011 and on a more micro level, 2016).
Moving on, we have long been noting that when silver takes over leadership from gold it will be time to branch out to the broader inflation trade, featuring commodities. I have already done so to a minor degree and probably just for a trade, but commodities have been killed by the global deflationary pressure post-2011 (and Operation Twist) and most acutely during the 2020 deflation scare.
The Silver/Gold ratio has been bouncing from its impulsive drop (in the face of the impulsive upside parabolic move in the Gold/Silver ratio), which is unsustainable unless the current system is terminating right here and now, against policy makers' wishes (possible, but not very likely).
As you can see by the weekly chart this move is just a bounce with a long way to go before it confirms the new inflation trade. One day when silver (of a more cyclical inflationary character than gold) is in a new uptrend vs. gold (of more counter-cyclical character) the inflationary promoters will be in your face 24/7 advising how to protect yourself from the scourge that the Fed, Treasury and their global central banking fellows are hard at work creating today.
That's fine. Every promoter finds his nut. But again, please keep gold stocks in a separate pile. Their fundamentals would degrade in a cyclical inflation phase, even as their prices probably continue rising (ref. 2003-2008 as a prime example of this). 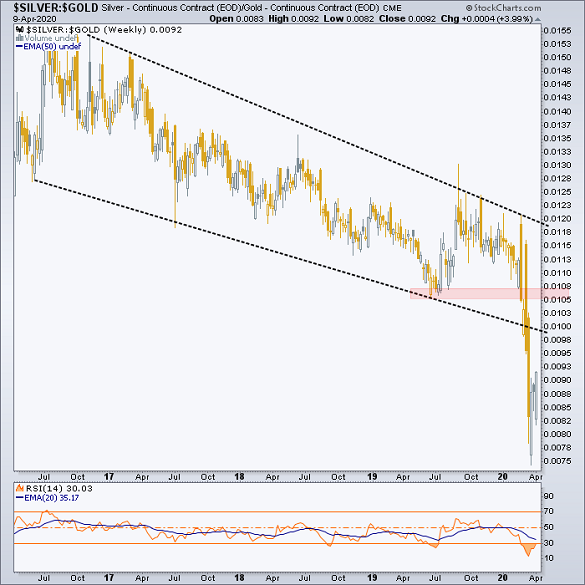 For now however, during the transition, the gold stocks lead and their fundamentals and value proposition will have improved by leaps and bounds as we exit the Covid-19 global lock down. One chart among many we use in NFTRH shows this in clear and simple detail. HUI is greatly lagging the ratio between the gold mining product and a gold mining cost input. 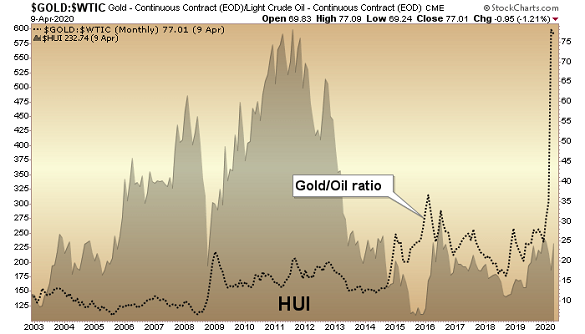 Despite the fundamentals, there will be volatility galore moving forward. But if the technical break shown on daily HUI above holds up as expected and considering the massively positive fundamentals and sold out inflationists, it looks to be an extended phase of buying the coming volatility to add to existing positions (traders, trade as you will) before inflation takes root in the coming years.
Finally, I want to note that while NFTRH will be managing the process closely, it is far from a gold stock rag exclusively. The Covid-19 crisis has presented other opportunities as well and we've been covering them each week. But I do think the gold sector is a prime area for the current time.