END_OF_DOCUMENT_TOKEN_TO_BE_REPLACED

US stocks just logged their worst year since 2008 – their worst December since 1931 – as fears over global trade, ballooning debt, the end of accommodative central bank policy and a US government shutdown unsettled investors.

Against this backdrop, the price of gold rallied late in 2018, reversing a trend of negative returns and weak investor demand that prevailed for most of the year.

The yellow metal, after all, has historically had a strong negative correlation with the market. I'm pleased to report that this inverse relationship held firm in 2018, proving again that investors continue to see gold as a valuable asset in times of financial instability. As you can see in the charts below, gold beat the S&P 500 Index for the month of December, the fourth quarter and the year.

With stocks down, gold's outperformance shouldn't come as such a shock to most readers. 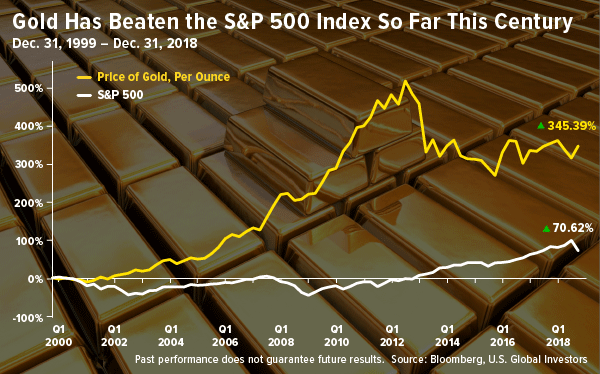 This tells me that, even though gold is still down from its 2011 peak, investors continue to value it as an attractive store of value.

Indeed, gold bulls added substantial positions to ETFs backed by bullion in December as the metal headed for its biggest monthly advance in two years.

Gold-backed ETF holdings surged by more than 100 tonnes between October and December, helping to boost prices even further.

Quincy Krosby, chief market strategist at Prudential Financial, explains why this buying is no fluke.

Speaking to Bloomberg, she said that "the market is questioning whether the [Federal Reserve] is making a policy mistake, and that could not only lead to slower growth, but perhaps to a recession."

Krosby went on to say that when you see this heavy selling in equities, "it's indicative of fear, and gold [historically] becomes [favored as a relatively] safe-haven allocation."

It wasn't just bullion that had a good quarter. Precious metal miners, as measured by the FTSE Gold Mines Index, gained a remarkable 15.85% in the three months ended December 31. Among the leaders in 2018 were Nevsun Resources, up 106% for the 12-month period; Kirkland Lake Gold, up 81%; SSR Mining, up 45%; and North American Palladium, up 38%.