END_OF_DOCUMENT_TOKEN_TO_BE_REPLACED

Gold already rising versus the stock market...
WE ALL know that gold and its fellows have bottomed vs. broad stock markets, writes Gary Tanashian in his Notes from the Rabbit Hole.
Below is a daily chart pictorial view showing the impulsive bursts upward off the lows, relative to the S&P 500 index, by gold and silver.

The caveat is the shirtless man on the Ukraine border, associated media 'war drums' and contrary market sentiment knee jerks that could cause a reaction in gold when that sentiment adjusts away from fearful as it eventually will.
But the non-caveat is that this came from an outstanding risk/reward for gold and its associated complex, as we noted in December 30 post "2022: The Golden Year".
The relative (to SPY) daily charts show impulsive spikes off the bottom, and when Russia/Ukraine sentiment relief finally comes about in the broad markets there would probably be a downward reaction in the overbought precious metals.
With the hawkish Fed jawbones having been instructed to back away from their microphones for a moment by the non-inflationary and risk 'off' macro signaling that came with the crisis, the 'market relief' play will be seen in hindsight to have been in the bag. The question is when and from what market support levels?
That would probably include pressure to some degree on the precious metals. They are earning the correction they would get when macro relief sweeps across the land. But again, before all this started there was that excellent risk/reward for gold much like was probably the case in 2001 when gold began a secular bull market during the mother of all war drum events, putting Russia/Ukraine in some perspective.
A negative reaction does not need to mean 'terminal' in this case. A real bottom may be in.
The beautiful monthly chart of gold would argue against my reservations about the war drums, however.
9/11 was a terrifying time. The terror gave way to war abroad but also a gradual resumption of normalcy here at home and eventually, an inflated bull market in stocks that became obvious in 2003. Again, whatever 'normal' means these days. Let's call it 'Normalcy onDemand' to go along with the Fed's 'Inflation onDemand'. 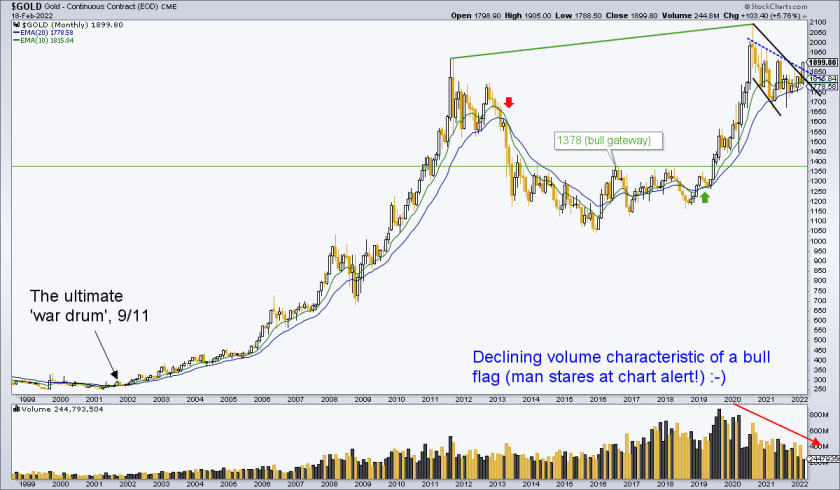 Point being, a secular bull market in gold began as the ultimate terror/war event engaged. It continued on for many years after terror-stricken sentiment had faded. So let's not set our views in stone. Negative hype events were met with spikes and failures by gold all through its 2011-2019 bear market. But this is a bull market; a bull market that has barely been interrupted by the last 1.5 years of relatively bearish activity.
So there's that. 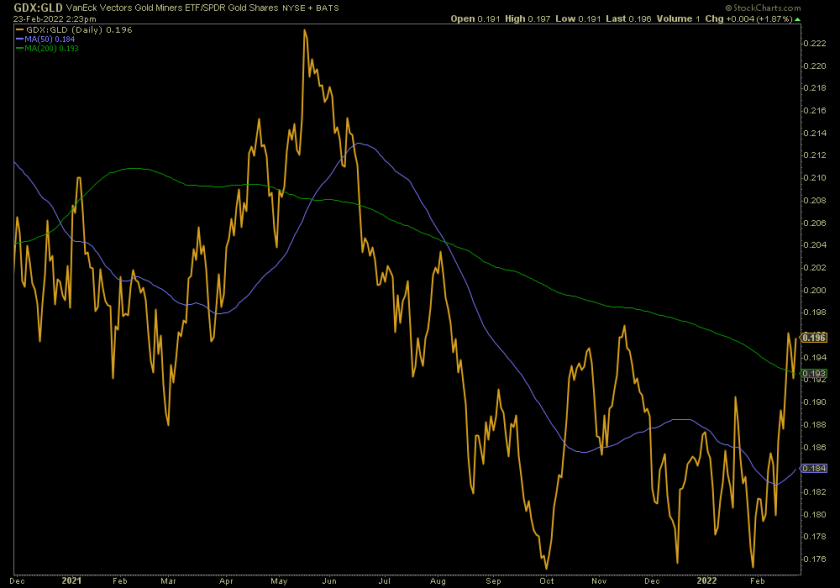 For good measure, let's throw in this important chart with respect to the precious metals rally. When this starts to weaken (sooner or later) it would be a signal to have some caution. Right now it's anything but weak. The miners are actually 'impulsive up' vs. gold on the very short-term.
Next step for this and all of these charts is to turn the daily trends up by turning the 50 and 200 day moving averages up. That would confirm this strong rally at least and quite possibly a new bull market in gold relative to stock markets, and a new up phase in the ongoing bull market for gold.