END_OF_DOCUMENT_TOKEN_TO_BE_REPLACED

Gold/Silver Ratio 'will hit low 70s' from 84 today...
SILVER PRICES will rise across 2019 according to leading analysts, pulling the Gold/Silver Ratio lower as the white metal outpaces its dearer cousin.
In spite of "short-term headwinds", specialist analysts Metals Focus "see late 2019 representing a turning point for silver investment, and hence silver prices," led by renewed interest in gold.
"In addition to a recovery in physical investment, silver industrial demand is also expected to continue growing for the fifth consecutive year," the consultancy goes on, "which will offset gains in mine supply."
That means silver's surplus of supply over demand "is expected to fall in 2019...[marking a] contrast to the trend over 2016-18 [which] created a headwind as it encouraged institutional investors to stay out of the silver market, helping explain silver's underperformance relative to the gold price in recent years."
Because the silver market is "far smaller" than gold's, inflows of investor money means "silver [will] gradually outperform the yellow metal," Metals Focus say, "resulting in a fall in the gold:silver ratio to the low 70s in late 2019."
A measure of the two metals' value relative to each other, the Gold/Silver Ratio simply divides the current gold price per ounce by the current silver price per ounce.
From this week's reading of 84, a drop to the low 70s would mean a rise in silver prices above $18.50 – a gain of 20.0% from current levels – if gold held at today's price of $1300 per ounce. 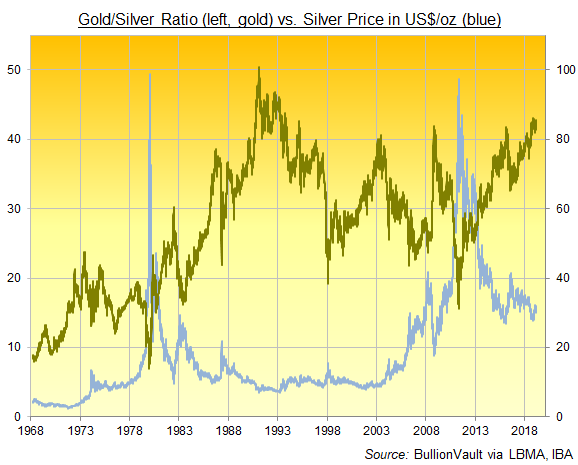 Gold has now traded at 80 times or more the price of silver every day for 7 months, the longest stretch since its all-time peak against the cheaper precious metal of 1990-1993.
Now running to 147 trading days, this stretch already outnumbers the 144 trading days which the Gold/Silver Ratio spent in total above 80 between November 1993 and August 2018.
Basis the London AM Gold Fix and 12 noon Silver Fix, the ratio has traded above 100 only once, on 25 February 1991. Gold fixed that morning at $357.50 – then a 7-month low – as silver fell to $3.55, its lowest price since January 1974.
The Gold/Silver Ratio's foray above 80 in late-2008, made as silver plunged amid the worst financial crash since the Great Depression of the 1930s, was followed by a sharp drop to a three-decade low of just 31.5 as the metal then recovered and raced to try new all-time highs near $50 per ounce in April 2011.
Averaging $15.70 in 2018, silver prices will rise 3.7% to average $16.28 across 2019 according to the average analyst's prediction in this year's survey of analyst forecasts from precious-metals trade body the London Bullion Market Associaton.
"While a US recession is not on the horizon," says the most bearish LBMA entrant, Peter Fertig of researchers QCR in Germany, "a slowdown of global GDP growth has to be expected. Therefore, silver demand is suffering from its industrial use.
"Silver might [also] face headwinds from higher US money market rates and a firmer US Dollar," he adds, predicting a low of $12.75 and an annual average silver price of $14.90 per ounce.
2018 saw the largest surplus of silver supply over demand to make new products since 2010 according to analysts Refinitiv (formerly Thomson Reuters GFMS).
Figures from Metals Focus disagree, putting 2018's silver surplus – again before accounting for the changing size of silver-backed ETF trust funds and futures exchange inventories – lower from 2017, with a further drop forecast for 2019.
Either way however, "The silver market balance in 2019," says users-and-producers group the Silver Institute in Washington, "is projected to be the third consecutive year, within the boundaries of margin, where all the silver produced is absorbed by the various downstream sectors." 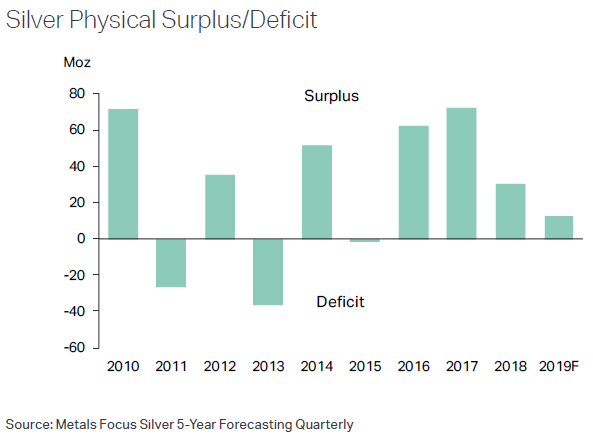 The 2019 forecasts made in January's LBMA survey by Metals Focus analysts Nikos Kavalis and Neil Meader predicted an average Gold/Silver Ratio of 79 this year.
The average across all LBMA competition forecasts put the GSR at 80.5 with silver prices seen averaging $16.28.
London-based consultancy Capital Economics reckons the Gold/Silver Ratio will fall to 77 by year-end, with silver prices rising to $17.50 per ounce as "both metals attract investors seeking safe havens."
Looking at mining output, "Most silver production comes from polymetallic mines [including copper and zinc projects]," Capital Economics adds, "so given the slump in the prices of many base metals, we think supply growth will slow."
"I am very bullish on silver this year because I am bullish on gold," says Lobo Tiggre, analyst at The Independent Speculator newsletter, speaking to Kitco on the sidelines of this month's PDAC mining conference in Toronto.
"Where gold goes, silver follows. [But] when the precious metals break out, gold leads and then silver goes off."