END_OF_DOCUMENT_TOKEN_TO_BE_REPLACED

Pivotal juncture for gold, silver and mining stocks...
AS THEY they leverage the macro, what's good for gold is even better for gold miners, says Gary Tanashian in his Notes from the Rabbit Hole.
Recently we noted a unique move on 'CPI Friday' as gold and the miners put in an expected test of the lows and quickly reversed upward, unique among a world full of bearish markets.
Let's take a checkup on and important fundamental consideration in the wake of FOMC and the 0.75% rate hike that everyone knew was coming.
But first I want to remind readers that NFTRH is not a place to visit if you want to get pumped on oil, copper and general (and cyclical) commodities and resources along with gold.
It is the place to visit if you want discrete commodity analysis amid cyclical/inflationary conditions and/or a guide to the proper macro fundamentals that should be in place for gold and gold stocks in their rare but unique utility as a counter-cyclical market, unlike commodities and stock markets.
We'll cover one key item (others will be consistently updated in NFTRH, as will ongoing technical analysis of individual quality gold/silver stocks), which is gold's relation to other more cyclical and inflation sensitive markets.
But first a look at the monthly charts of gold and silver, showing intact status. The gold price has moved from the bull gateway breakout in 2019 to a new high, to a handle that represented the correction the precious metals needed as we noted in mid-2020. Then came the handle breakout and this year, the retest of that breakout (still in progress). Gold's big picture remains bullish. 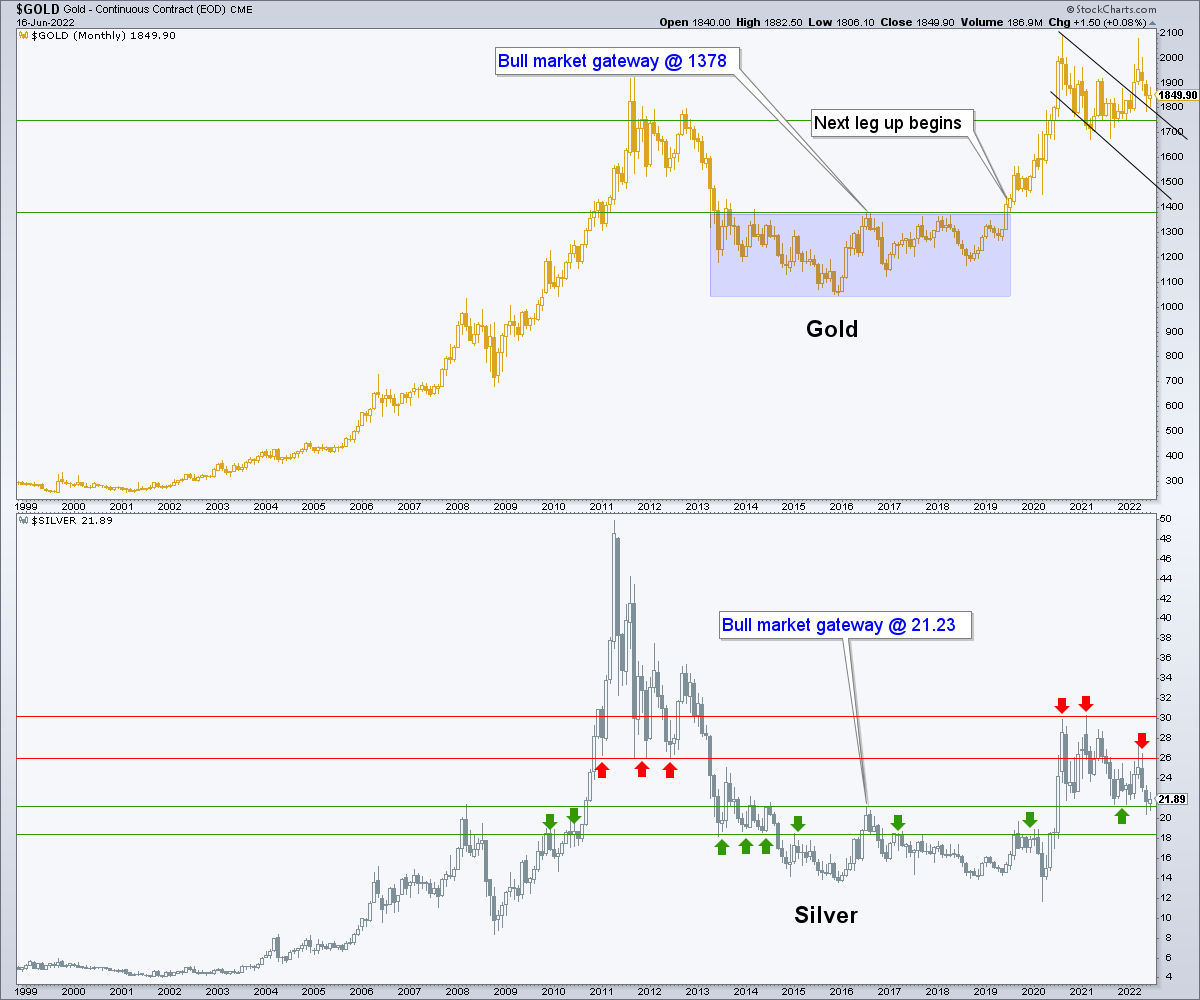 Silver is sloppier but as noted to subscribers on June 14 it has key support at $21.25 and $18.25. It currently holds support #1.
Also per that post, silver has to clear the $22 area resistance (not defined on this monthly chart), which we've been tracking in NFTRH since early May.
Silver, while a lesser precious metal, is obviously a tail wind to the bull case for the whole complex if it also rallies. It is also important for gold stocks to leverage the macro in a positive way.
Since mid-2020 the miners have leveraged an inflationary macro in a negative way (contrary to what your local gold stock promoter has touted). This macro snapshot shows Gold/Stocks having turned up, taken a hard test and resumed upward. Counter-cycle, here we come. The counter-cyclical view is aided by Gold/Industrial Metals, including Doctor Copper. It looks like gold has made a good bottom vs. metals consumed by economic growth, i.e. cyclical metals. 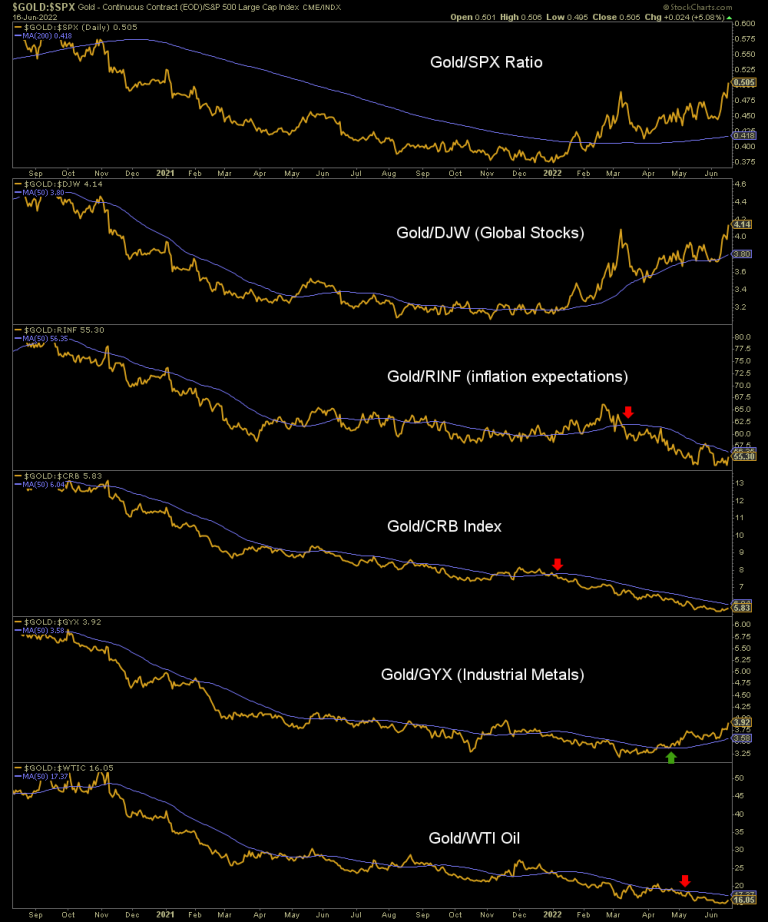 On the negative side, you can see that crude oil has been a holdout due to its own unique supply/demand fundamentals, subject as they are to a world at war and/or at increasing geopolitical tensions.
I expect that this too shall pass eventually, and when it does gold miners will get a bottom line operational benefit as this mining cost driver eases in relation to the mining product.
However, the price at the pump has helped drive inflation expectations to furious highs lately and the CRB index is still trending up, driven by oil as it is. Aside from energy stocks (on a stiff correction within an uptrend), many commodity producers are breaking down, however.
Gold mining fundamentals by this chart are improving rapidly, but still incomplete. This would not preclude them from rallying because stocks tend to look ahead. If they rally they could well be looking ahead and seeing gold bottom and turn up vs. more mining cost drivers.
As for stock markets and other commodities, players in those markets are already turning toward gold. It's more of a psychological thing, as stocks aren't working, bonds aren't working and so what is left?
That is the makings of a gold bull market, not as part of the inflation trades.
I invite you to join NFTRH (now available through simple credit card signup in addition to PayPal and other options) to be on the right side of a changing macro. The above is one small snapshot of change, but there are sure to be many more assumptions forged in the past that will need revision in the future. It's an exciting time to be a market manager. Not says I, but says the likes of this chart of the 30 year Treasury yield's broken relationship with its monthly EMA 100 & 120, to name just one. 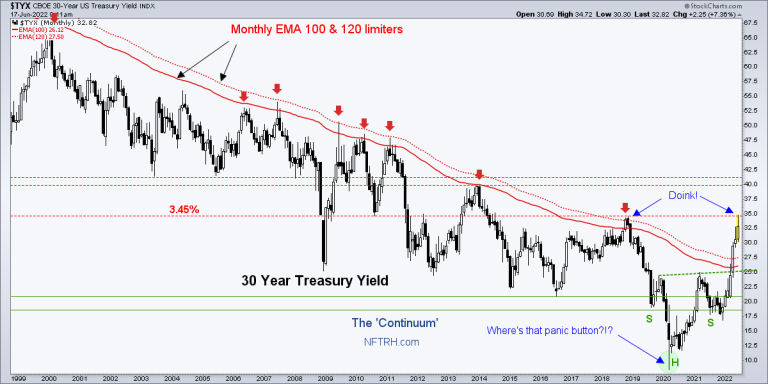 A macro turn is in progress and not yet complete. The coming cycle will include new inputs and investors should not have automatic or robotic thinking, especially about inflation as it relates to gold. The seasonal, which is a moving target at best in any given year, does not bottom until July, but sentiment has been hammered and the macro cycle is turning negative and so too is confidence, which is the best case for gold.
One notable vulnerability remains; that is the fact that most gold bugs are also inflation bugs, so we should keep in mind that if the markets experience what nobody currently expects, a severe drop in liquidity and inflation expectations (ie, a deflationary episode) many gold mining bulls will probably sell for the wrong reasons (as gold rises in relation to mining costs and a failing macro in general).
An inflationary failure does not appear likely, but that's the whole point. The majority of gold stock bulls have been frustrated inflationists since mid-2020. Q4 2008 provides a handy example of what happens when the inflation bugs take a final wipe out.