END_OF_DOCUMENT_TOKEN_TO_BE_REPLACED

Technical analysis of where precious sits today...
THERE is always much more in play than nominal charts, writes Gary Tanashian in his Notes from the Rabbit Hole.
For precious metals, see the macro & sector fundamentals for example, which bounced of late but never did definitively flip positive.
But with that understanding, let's review said nominal charts of gold, silver and the HUI mining-stock index, along with an update of the Gold/Silver ratio for good measure.
Meanwhile, we will continue to update the full spectrum of considerations for a positive view of the precious metals complex, including gold's standing vs. cyclical, risk on markets/assets, the state of speculative vs. quality credit spreads, the inflationary backdrop (despite promotions to the contrary, cyclical inflation is not beneficial to the gold mining industry), the seasonal averages and the charts of the metals and miners over various time frames in NFTRH.
Gold
The daily chart shows the gold price (futures) below the moving averages but above short-term support after failing – amid much personally observed cheer leading to the contrary – to cross the bull gateway at 1920. 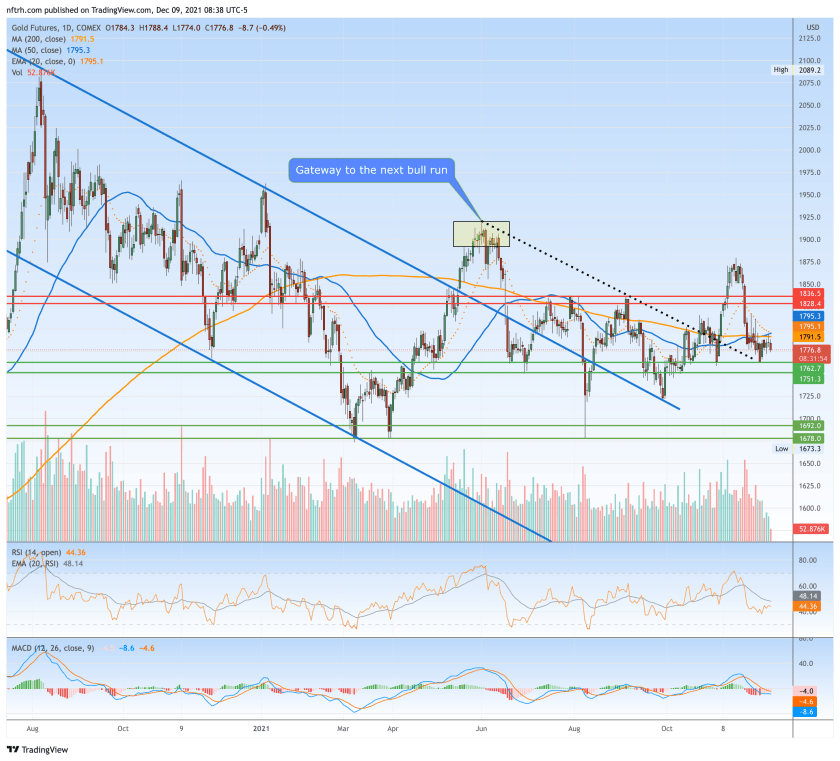 As a side note, the broken blue downtrend channel on this daily chart is actually the Handle to a large and bullish big picture Cup that only has one thing going against it that I can see:
Too much exposure by too many technical analysts, which of course means it may not be expressed until many of those TAs recant their stories.
We have noted all along that the Handle can drop all the way to the 1500s without damaging the 2022 bullish Cup story. Indeed, if it were to happen (not predicting folks, but being prepared) it would be healthy.
There is nothing healthier than a good running of the bugs before a major bull move.
Silver
The silver price (futures) had risen all the way to the objective, which was the now down-turning simple moving average of 200-day prices. It then not surprisingly (if you dismissed the pom pom waving) failed there. 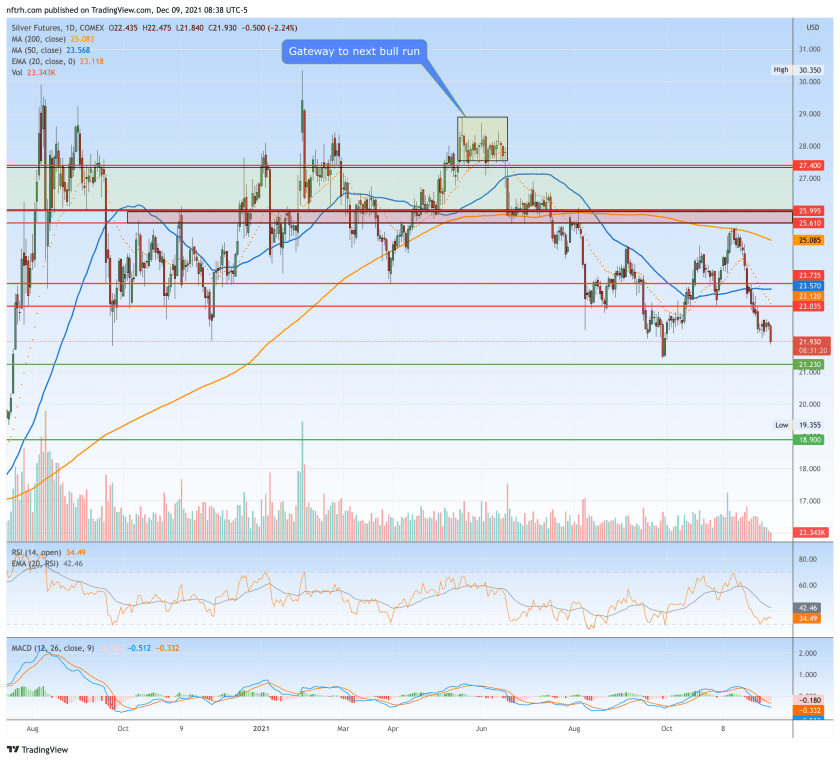 This keeps open the possibility of a drop to just below 19 in what could still be termed a bigger picture bull market, sloppy (compared to gold) though it is.
Gold/Silver Ratio
The GSR is accompanying its fellow market liquidity extractor, the US Dollar, as updated recently for subscribers, upward. 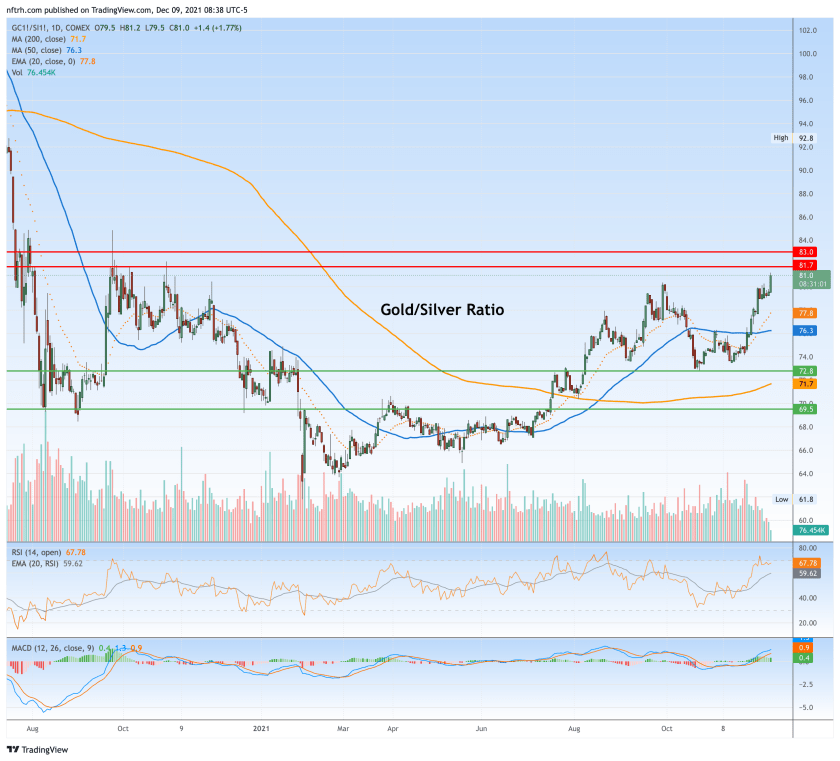 With silver having lost leadership, gold stocks – which tend to rise when silver is leading, and fall when both metals are bear trending with gold firm relative to silver – would be vulnerable.
As for the rest of the markets, a rising GSR is often but not always bearish. The less cyclical and inflation-sensitive the better, if the GSR and USD continue to rise together (USD is near the third of NFTRH's three upside targets at 98, while the target for GSR, not necessarily a stop sign, is noted in the 81-83 area).
HUI
I have been leaning toward an oversold bounce for the sector, but (okay, we'll slip one macro view into this post) said bounce would be without some important fundamentals at Huey's back.
Recently constructive ratios of gold vs. cyclical and inflation markets have dropped again this week. HUI had formed a daily chart pattern that you, I and a legion of TAs saw form.
The index then expressed upward, took out the SMA 200 and in typical gold stock fashion, failed miserably. While there was much gold bug excuse making about an "attack" by the cabal, the daily chart trends (SMA 50 and SMA 200) were and are down. Period. To boot, as noted above, the fundamentals are not in order. Not yet.
So the lower low was a caution, as noted in NFTRH when it came about.
It may turn out that the bounce scenario was wrong (or already played out as HUI bounced to and lurks right below the SMA 50). Personally, aside from three long-term positions (per portfolios published each weekend in NFTRH) I had added a few miners for an oversold bounce and may need to revisit that situation as the bounce could turn out to be of the mini variety.
There is a whole wide market out there and while the time will come to ride a big gold stock rally, that time does not yet appear imminent, continued short-term bounce or not.