END_OF_DOCUMENT_TOKEN_TO_BE_REPLACED

GOLD BULLION rose for a 2nd day running in London trade Friday, capping 2021 with a price just shy of $1820 per ounce as activity in the precious metal's global storage and trading hub closed down for the long New Year's holiday weekend.
This morning's gold price marked a drop of 3.9% in US Dollar terms from last 31st December, the first annual retreat in 3 and gold bullion's 6th year-on-year drop of the 21st Century so far.
But across 2021 as a whole, the London 3pm auction – the globally-recognized gold price benchmark, set by trading in large warranted-quality bullion bars – has averaged a new all-time record above $1798 per ounce, up 1.6% from 2020 and extending the underlying trend higher to a 6th year. 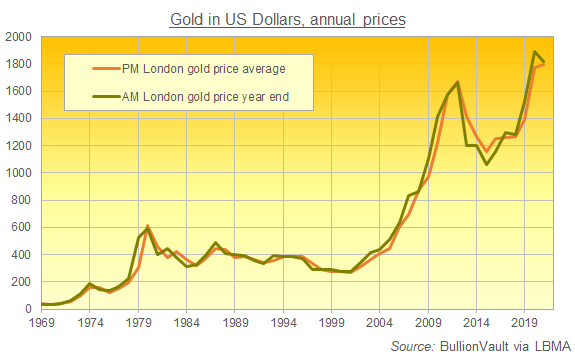 With gold prices ending this year with the first drop since 2018, US Treasury bonds also showed their first annual price-drop in 3 on Friday, holding the yield offered to new buyers of 10-year debt at 1.50% per annum, up from 2020's record year-end low of 0.93%.
Inflation has risen much faster however, with the trend surging to a rate of 6.9% per year in November for US consumers on the official CPI measure – the fastest rise in the US cost of living since summer 1982.
Silver bullion today traded little changed from Christmas at $23.20 per ounce, down 12.5% from last New Year's Eve.
Like gold, that marks silver's first end-year drop since 2018 and its steepest since 2015. But again like gold, silver's price across the year rose in 2021, following last year's 26.6% gain with an additional 22.7% price rise to show its highest annual average since 2013 above $25 per ounce and extending its upwards trend for a 3rd year in  succession.

Global stock markets were meantime mixed Friday morning, holding flat overall after slipping yesterday from Wednesday's fresh record high on the MSCI World Index and showing a gain of 20.3% for 2021.
Commodity prices slipped, trimming 2021's solid gains after US oil giant Exxon (NYSE: XOM) was awarded 2 million barrels from the national strategic reserves to try easing the ongoing supply crunch.
That still left US crude oil trading above $76 per barrel, trending more than 50% higher from the end of last year as energy prices followed the crash phase of the Covid Crisis with their strongest rally since 2009's rebound followed the global financial crisis.
Having first identified the Omicron variant, South Africa today lifted its Covid curfew, saying that the wave has peaked with new cases down 30% from this time last week, but New Year's Eve celebrations around the world remained curtailed by social distancing and other restrictions as Omicron continues to set fresh daily records for confirmed infections.
On the political front, US and Russian presidents Biden and Putin again traded warnings of retaliation if the tensions regarding Ukraine worsen, with the Kremlin boss – whose government yesterday designated yet more domestic opponents and critics as "foreign agents" – warning his opposite number in Washington that any fresh anti-Moscow financial sanctions would represent "a colossal mistake".
US-EU sanctions against Russia following its 2014 annexation of Crimea and support for breakaway Ukrainian forces saw Moscow's central bank buy almost all of the world's No.3 gold-mining nation's output over the following 4 years.
Having supplied combat drones to Ukraine to the irritation of its former anti-West partner in Syria, Turkey this week asked Russia to dial down its "one sided" demand that the Nato military alliance must not accept Ukraine as a member.
"We are in good spirits. Everything is under control," claimed Turkey's finance minister Nureddin Nebati yesterday as the Lira fell back to what were new all-time lows on the FX market ahead of this month's fresh slump and rebound following the latest interest-rate cuts by the TCMB central bank in the face of inflation rising above 20% per year.
"It will soon stabilize. Our morale is not broken," Nebati said, claiming that the US Dollar's relative surge in value against the Lira was due to a "perception operation".
Gold prices for Turkish households – the world's 5th heaviest consumers after China, India, the US and Germany – have risen by well over 40% in 2021, setting a run of fresh all-time highs.
Gold prices have been much steadier in No.1 consumer China, now seeing a 2nd major real-estate developer crash on the stock market following Evergrande amid debt default fears, with the gap between Shanghai and London quotes – effectively the incentive for new bullion imports – averaging almost $5 per ounce against last year's Covid Crash discount of $26.
India's strong gold demand recovery may face a challenge from regulatory changes in 2022, reckons Somasundaram P.R., head of the mining industry-backed World Gold Council's India team, pointing to positive hopes for the country's much-delayed International Bullion Exchange – now due for launch in January – but concerns over supply-chain problems and inflation, worsened by this June's introduction of mandatory hallmarking for jewelry.
The UK gold price today ended 2021 down 2.4% from last year's finish, trading at £1350 per ounce, after the Bank of England became the first major central bank to raise its key interest rate this month, albeit by only 15 basis points to 0.25%, while inflation has reached 5.1% on the UK's official CPI measure.
Gold bullion for Euro investors, in contrast, has risen by 4.4% in 2021, closing New Year's Eve at €1607 per ounce, a fresh all-time year-end high.