END_OF_DOCUMENT_TOKEN_TO_BE_REPLACED

GOLD PRICE losses of 1.5% for this week so far were erased Thursday as bullion rallied following the US Fed's widely expected move to accelerate QE tapering and project higher interest rates ahead for 2022.
Priced in the Dollar, gold bullion rose towards $1790 per ounce, putting it on track for its highest weekly close in 3 if held through Friday. 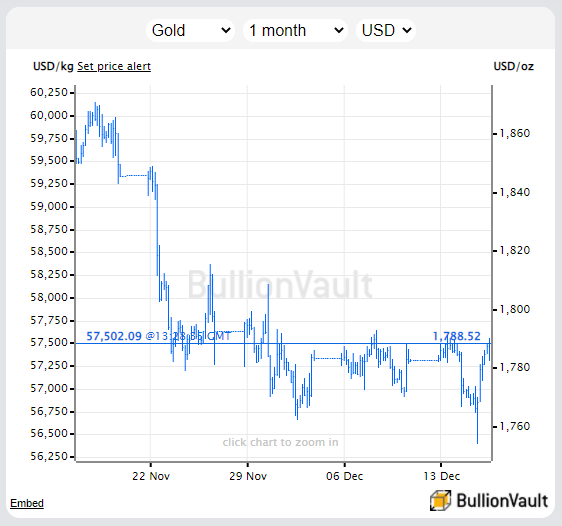 The European Central Bank today also tweaked its quantitative easing plans, accelerating the taper of its Pandemic Emergency bond-buying but extending other programs while holdings its key interest rate at minus 0.5% yet again.
That saw Euro gold prices also hold above last weekend's close on Thursday, briefly trading above €1580 with a 1.5% bounce from Wednesday's initial spike down when the Fed announcement was made.
But the UK gold price in Pounds per ounce slipped back however after the Bank of England finally raised its key interest rate from 0.10% to 0.25% – a move widely expected 6 weeks ago – after inflation in the world's 5th largest economy reached more than 5% per year on new data yesterday.
"BoE raises rates to 0.25% in fight to curb inflation," says a headline from CityWire.
UK inflation reached 5.1% on the CPI measure in November, very nearly a 3-decade high.
Last time the UK cost of living was rising faster, the Bank of England's base rate was set at  12.9% per annum.
"The market was looking for a hawkish move from the Fed and they got it in the dot plot," Reuters quotes one precious metals trader, pointing to the US central bank's economic, inflation and interest-rate projections.
"The Fed is a little spooked and doesn't want to be too far behind the curve," he adds. 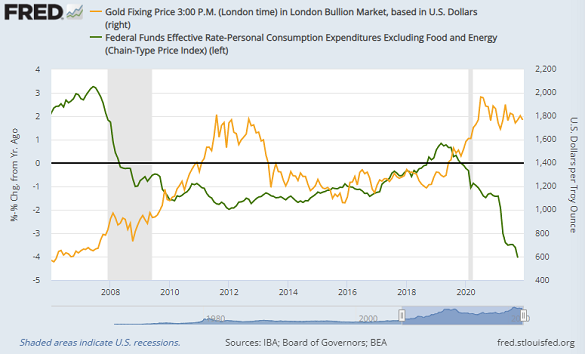 With QE tapering accelerated to see additional bond purchases ending in March, it won't be "appropriate" to raise rate while new quantitative easing is ongoing said Fed chair Jerome Powell in Wednesday's press conference.
But the Fed's projections now foresee real interest rates of -1.8% versus core PCE inflation in 2022, up from September's forecast of -2.0%.
Real Fed rates then rise to -0.7% in 2023 (up from September's -1.2% prediction) and reach 0.0% in 2024.
"For gold prices," says the trader quoted by Reuters, "the key technical level is $1750; a break substantially below that could lead to a rout in the waning days of the year."
"Precious metal prices are anticipated to ease in 2022," reckons a blog from post-WW2 international finance agency the World Bank, because "tightening of monetary policy could result in higher real interest rates and reduce the appeal of gold.
"Industrial demand for silver, which had been supportive of prices, has waned," the World Bank adds, noting that China's manufacturing activity surveys have weakened while Japan's "has been well below the global average".
Silver prices also rallied but less than gold and from deeper lows, helping keep the Gold/Silver Ratio of the 2 formerly monetary metals above 81 on Thursday – a 14-month high – as the gray metal traded at $22.20 per ounce.
Industrially-useful metal platinum also showed a wide discount to gold, trading $850 per ounce below the yellow metal after marking a 3-month low relative to gold on Wednesday.
"Despite still high inflation, gold seems unlikely to have a good 2022," says German financial group and former London bullion market-maker Deutsche Bank, because "it was notable how higher inflation did not translate into higher gold prices" in 2021.
"Gold [is] perhaps no longer the obvious safe-haven for some investors."
"Gold has lost its ability to be a hedge, and we all have to recognize that," adds celebrity fund manager and CNBC tipster Jim Cramer.
"I used to say that gold should be a 10% hedge. Now it's only 5%. I prefer crypto to gold."
"With US real [bond] yields still in the process of basing," add analysts from Swiss bullion bank and financial services group Credit Cuisse, "and with the US Dollar expected to strengthen further, [the gold price] stays seen under pressure.
"Below support at $1759 [it] can see a retest of long-term pivotal support at $1691/77" – the March double low – and beneath there "at any stage would mark a major top with just initial support then seen next at $1561."
Back in London meantime, Bank of England analysts now "expect inflation to remain around 5% through the majority of the winter period," says today's BoE policy statement, "and to peak at around 6% in April 2022.
"Contacts of the Bank's [research] Agents expect further price increases next year driven in large part by pay and energy costs. CPI inflation is still expected to fall back in the second half of next year."
Governor Andrew Bailey repeated throughout spring and summer 2021 that the rise in inflation was "temporary", restating that view as late as end-September.
Having risen strongly after the Fed decision overnight, gold priced in the British Pound today edged back £10 per ounce on the BoE decision, trading back down to £1335 per ounce to show a 0.8% loss for the week so far.