END_OF_DOCUMENT_TOKEN_TO_BE_REPLACED

What to do if you missed out...?
The TIME has come, writes Frank Holmes at US Global Investors.
The price of gold has risen above its all-time record closing price of $1891.90 per ounce, set in August 2011. Once the precious metal breeches the important $1900 resistance level, I believe the sky's the limit.
Silver is meantime trading above $22.70, up 94% from its 11-year low on March 18. 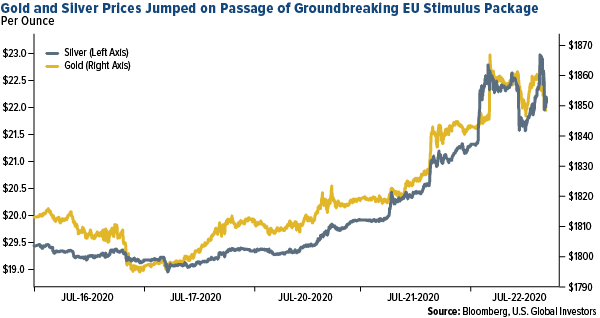 This is a secular bull market we're in, supported by several factors, and there's no reason why gold can't hit $10,000 in the coming years.
Remember rhodium? The rare earth metal climbed an insane 22 times, from $625 in July 2016 to as high as $13,850 in March.
Precious metal miners have also outperformed, with the Philadelphia Gold and Silver Index strongly beating the S&P 500 for the year so far, by a factor of 17. Among the best performers year-to-date have been Gold Fields (up 88.4%), Harmony Gold Mining (85.7%) and Alamos Gold (84.1%).
Our favorite way to play the rally remains precious metal royalty and streaming companies, including leaders Franco-Nevada (up 54.4% for the year), Wheaton Precious Metals (76.3%) and Royal Gold (13.5%). The group reported a solid first quarter on higher metal prices, and I'm eagerly awaiting second-quarter results when they begin reporting early next month.
Over the past two years, Franco-Nevada, Wheaton Precious and Royal Gold have seen their combined market cap more than double in value, from $29.5 billion to some $61.5 billion. 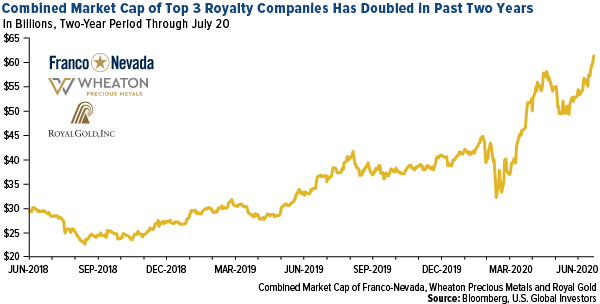 Some investors may be wondering if the gold rally is sustainable. We believe that it is, especially in the short term.
The gold price action is being driven in large part by the ongoing realization that the coronavirus isn't going away so easily, short of a vaccine. During his televised briefing last Tuesday, President Donald Trump commented that the situation "will probably, unfortunately, get worse before it gets better," highlighting the concern that lockdowns and layoffs may continue into the fall and winter.
LinkedIn became the latest company this year to announce a reduction in staff. The Microsoft-owned tech firm will be letting go of around 960 jobs across the globe as the pandemic has dented demand for its recruitment products. That includes Talent Solutions, which "continues to be impacted as fewer companies, including ours, need to hire at the same volume they did previously," LinkedIn CEO Ryan Roslansky wrote in a blog post.
Gold has also caught a bid thanks to the European Union's unprecedented $2.1 trillion stimulus package, announced after four days of negotiations. The deal has a number of firsts: European countries will raise money by selling government bonds collectively rather than individually, and much of the aid will be given to member states not as loans but as grants, which do not need to be paid back.
The EU agreement adds to the already-historic stimulus measures enacted by global central banks and finance ministries in an effort to soften the economic blow of the coronavirus.
Here in the US, lawmakers are currently hammering out the details of yet another stimulus bill, one that could possibly cost upwards of $1 trillion and include a second round of direct payments. If passed and signed into law, it would not only follow the $2.3 trillion CARES Act but also further raise the US national debt, currently at $26.5 trillion, or 132% of gross domestic product (GDP).
I'm also keeping my eyes on Judy Shelton, Trump's pick to join the Federal Reserve Board of Governors. Shelton is a long-time gold advocate and has in fact publicly backed the idea of returning to a gold standard. However unlikely that is, I see her potential advancement to the Fed as constructive for metal and gold mining stocks. Shelton, characterized as "controversial" and "unorthodox" in the media, received the green light from the Senate Banking Committee earlier this week. Her confirmation now requires a simple majority vote in the Senate.
All of that stimulus money has benefited not just gold and other precious metals and commodities. A lot of it has turned up in the stock market, particularly tech stocks. As I shared with you already, tech stocks are among the best performers of the year.
Many see a bubble brewing. According to a Bank of America survey, a majority of fund managers believe the group to be the "most crowded trade" in history. You may be aware that the combined market cap of Apple, Amazon, Microsoft, Google and Facebook now represents close to a quarter of the total S&P 1500 market cap. But did you know that just four companies combined – Apple, Amazon, Microsoft and Google – are bigger than the entire stock market of Japan? That's according to a recent quote by Bloomberg's David Ingles.
Check out the chart below. You can see that tech stocks, as measured by the NASDAQ 100, are now more overvalued relative to the S&P 500 than they were during the dotcom bubble, after which the market tumbled nearly 50%. 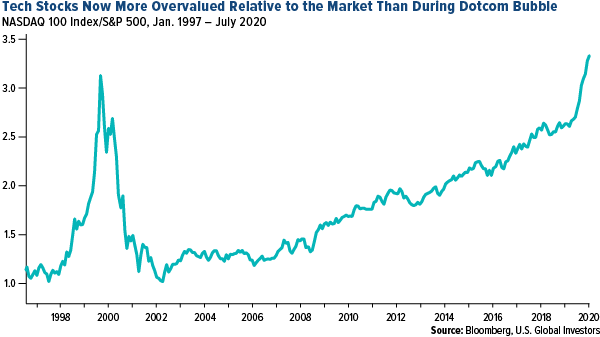 Need further proof of the "irrational exuberance"? Google searches for "tech stocks" were at an all-time high this month, using Google Trends data going back to 2004.
S&P 500 notches its best quarterly performance since 1998
click to enlarge
My reason for pointing this out is to say that investors should proceed with caution. Make sure you have exposure to gold and precious metals. I always recommend a 10% weighting, with 5% in bullion and the other 5% in high-quality good mining stocks and ETFs