END_OF_DOCUMENT_TOKEN_TO_BE_REPLACED

New gold & silver investing surges as prices rise, central-bank policies fail...
GOLD and SILVER's continued rebound in 2016 is attracting the largest number of new private investors to precious metals since the price crash of spring 2013, writes Adrian Ash at online market leader BullionVault.
With US Dollar prices for both gold and silver setting 14-month highs during April, some existing owners are also using this year's rally to take profits or cut losses.
But unlike the crash of 3 years ago, private investing in gold is growing strongly overall, with client holdings at BullionVault now overtaking the central bank gold reserves of Peru – the 49th largest national hoard – in April.
Still, private investor sentiment on gold edged a little lower overall in April from March's 8-month high on our Gold Investor Index.
That's because the number of people starting or growing their own physical gold holdings fell more than the number of people reducing their position in April, pulling the index down to 53.3 from 53.8 the previous month.
A reading of 50.0 would signal a perfect balance of net buyers with net sellers. 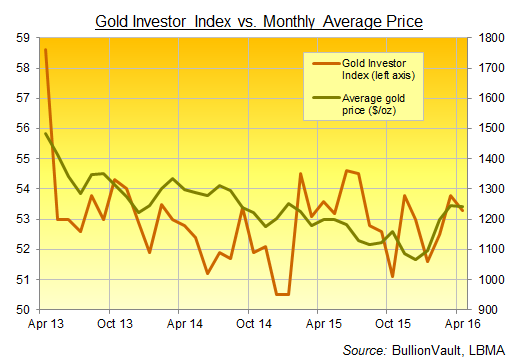 By weight, in contrast, BullionVault users added the most gold to their aggregate holdings –stored in the client's choice of London, New York, Singapore, Toronto or Zurich – since June last year.
Totalling almost one-third of a tonne, that inflow saw BullionVault clients' gold holdings overtake the Central Reserve Bank of Peru, the 49th largest national gold owner, at nearly 34.8 tonnes.
That also makes BullionVault's client gold holdings larger than all but 10 of the 77 exchange-traded trust funds (ETFs) currently backed by gold listed around the world.
The surge in silver prices – up more than 16% across the month to match gold in reaching January 2015 levels – meantime saw the number of sellers rise as buyers fell, pushing the Silver Investor Index down to 50.5 from the 52.2 level reached in March. 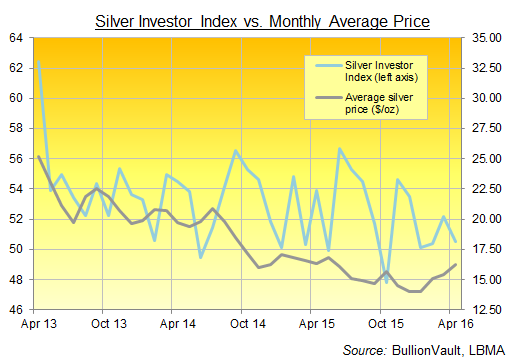 As with gold, however, clients overall were net buyers of metal by weight, marking the heaviest silver inflow since July at more than 10 tonnes, and also taking client holdings to yet another record above 562 tonnes.
BullionVault users have never sold silver net-net any month since we began offering the metal in January 2010. But while private investors were keaner to buy on falling rather than rallying prices over the last 3 years, net additions have continued since New Year 2016 even as silver has shot higher. And it's new investors driving demand.
Altogether, 2016 to date has marked the strongest 4-month period for new private investors in silver and gold since the April-July 2013 price crash. With prices rising strongly this time, that continues to signal a switch from the pattern of bargain-hunting developed over the last 3 years. A new wave of private investors is now buying physical bullion to escape other assets and threats, not as a play on metal prices themselves, seeking shelter from credit risk, poor stock market returns, and fast-failing central-bank policies.
The number of new users so far in 2016 is now 30% ahead of the last three years' 4-monthly average. If it weren't for February and March's boom, April would have been the strongest month for new users on BullionVault since January 2015.
Precious metals have a long way to climb before recovering their 2011 peaks, of course – a massive 67% in gold to $1900 per ounce, and an even bigger 178% in silver to that $50 mark. But this 2016 rebound in gold and silver prices is proving much more than a New Year's bounce from new 6-year lows.
Attachments: