END_OF_DOCUMENT_TOKEN_TO_BE_REPLACED

To repeat: watch the direction of rates minus inflation...

IT HAS beed a stellar six months for gold investors, writes Frank Holmes at US Global Investors.

The yellow metal has surged 28% year-to-date, its best first half of the year since 1974. And now there are signs that the rally is just getting started.

That's the assessment of analysts from UBS and Credit Suisse, who see gold entering a new bull run. According to UBS analyst Joni Teves, gold could climb to $1400 an ounce in the short term on macroeconomic uncertainty, dovish monetary policy and lower yields.

"These factors," Teves writes, "justify strategic gold allocations across different types of investors" and should encourage hesitant investors to participate.

Already-low bond yields around the globe have fallen even further in Brexit's wake, many of them hitting fresh all-time lows, including yields in the US, UK, Germany, France, Australia, Japan and elsewhere. For the first time ever, Switzerland's entire stock of bond yields has fallen below zero, with the 50-year yield plunging to negative 0.03% on July 5.

Canada's 30-year bond yield also plunged to a record low, as did yields on the 10-year and 30-year Treasuries. So about $10 trillion worth of global government debt now carry historically low or negative yields, which are "creating negative growth" in the world economy, according to billionaire "bond king" Bill Gross.

Anemic yields are also contributing to gold's attractiveness right now. Since Britain's June 23 referendum, the precious metal has rallied more than 8%, helping it achieve its best first half of the year in more than a generation.

Joining UBS in forecasting further gains is Credit Suisse, which sees gold reaching $1500 by as early as the start of next year. As Kitco reports, Credit Suisse analyst Michael Slifirski writes that "the surprise Brexit vote has solidified and intensified macro and political uncertainty and extended the time frame for a negative real rate environment in the US and potentially abroad." 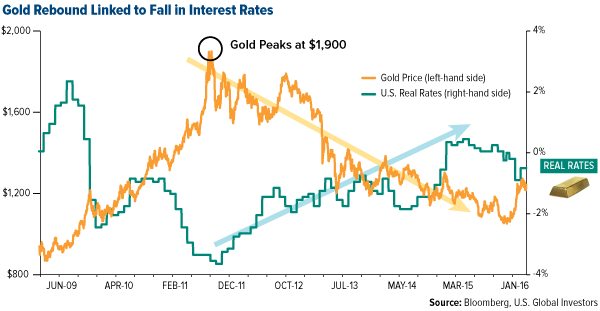 This is precisely what I told BNN's Paul Bagnell last week, using Canada as an example. The Canadian 10-year yield is sitting just below 1%, while inflation in May came in at 1.5%. When we subtract the latter from the former, we get a real rate of negative 0.5% – meaning inflation is eating your lunch. Like negative bond yields, negative real rates have in the past accelerated momentum in gold's Fear Trade.

We need only look at the end of the last upcycle in gold to see this to be the case. When gold hit its all-time high of $1900 in August 2011, real interest rates were around -3%. A five-year Treasury bond yielded only 0.9%, and that's before inflation took 3.8%. But as real rates rose, gold prices fell. Now the reverse is happening.