END_OF_DOCUMENT_TOKEN_TO_BE_REPLACED

Gold producers are small fry in the big pond of listed stocks...
EARLIER this month, Jeff Clark showed in his article A Rare Anomaly in the Gold Market that the gold sector is dramatically undervalued based on its price-to-book ratio, writes Andrey Dashkov, research analyst at Casey Research.
I would like to expand on his analysis and provide some additional context. Jeff found only 31 primary gold producers with a market cap over $1 billion. This seemed rather small when one considers just how many stocks trade around the world, so we wanted to compare this to other industries.
The charts below are built from a database of 6,830 companies. They're grouped by industry, and all have a market capitalization of US$1 billion or more. They trade on various stock exchanges.
Here's how the number of gold producers compares to other sectors. 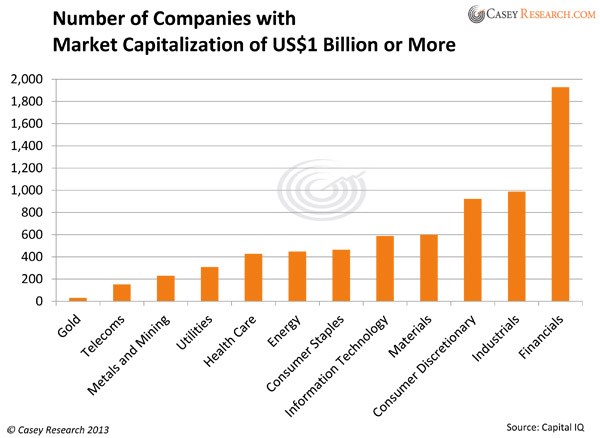 Primary gold miner producers are clearly a tiny group when compared to the number of companies in other industries at this market cap.
Gold producers with a $1 billion market cap or more are a small subset of the Metals and Mining group, a sector that comprises 229 companies, which in turn is a part of the Materials category that consists of 600 stocks, including companies producing chemicals, construction materials, containers, forest products and so on.
What's staggering is that there are three times as many companies in the Financials group as there are stocks in the whole Materials category. Further, there are 470 real estate companies with market caps of $1 billion or more within the Financials group. Primary gold producers would be just 6.5% of that subset.
What about the market value of the different sectors? They also vary widely, though the Financials group dwarfs them all. 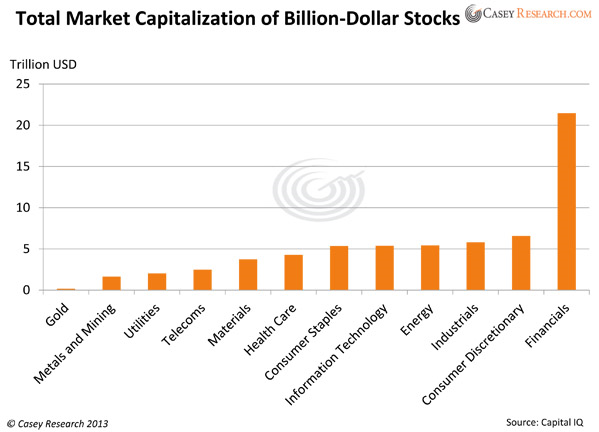 By market capitalization, billion-Dollar gold stocks represent only 12.5% of the total market cap of the Metals and Mining subcategory, which in turn is about 43% of the total Materials group.
Billion-Dollar gold stocks have a market cap just 0.9% the size of those in the Financials group.
The conclusion we can draw from these two charts is rather obvious: gold stocks are a tiny constellation in a big universe. That's important, because it shows just how very crowded his little area could get when the larger universe of investors turns to the gold sector. If they invest in the bigger companies, there won't be that many to choose from, which could swell stock prices.
In the meantime, gold stocks remain deeply undervalued. Let me build on Jeff's argument that gold stocks are cheap on an historical basis and compare them to other industries' price-to-book values as of July 17. 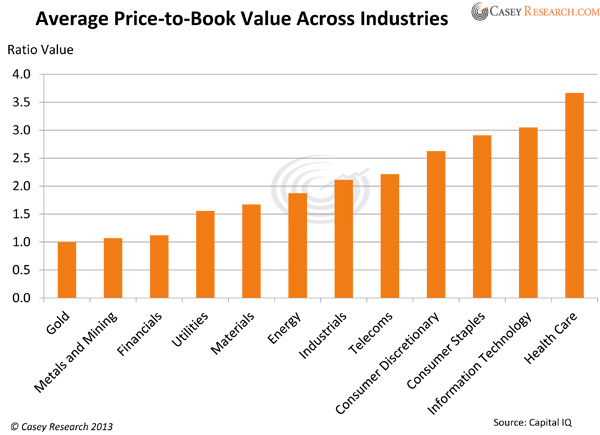 The gold industry remains the most undervalued sector available to stock investors today. Its latest price-to-book value is 1, the only industry at that level. It is slightly higher than what we reported in the beginning of July because gold has risen slightly since then, and so did many gold producers' share prices.
But they remain very cheap, as further evidenced by the Metals and Mining group having a higher price-to-book-value, implying that non-precious metals producers are valued more than precious metals producers, a rare anomaly.
How long will gold stocks continue to be so undervalued? As Louis James, also here at Casey Research, wrote last week, we don't try to time or predict the bottom. Those who've made fantastic amounts of money speculating in this sector didn't even try. They made money buying when valuations were ridiculously low...and simply waiting to be right.
That's exactly what we recommend at Casey Research, too – because when investors do return to the gold producers, it won't take much capital for this small minnow to become a much bigger fish. Not all companies will be equally attractive when investors return, but there are a number of precious metals producers that we're convinced will outperform in a big way, based on important factors – especially their price to tangible book value. They're revealed in the latest issue of Big Gold.