END_OF_DOCUMENT_TOKEN_TO_BE_REPLACED

A look at Gold Prices and their relationship with the Euro and the Dollar...

The most egregious (or just plain silly) example is that gold often drops when the Euro drops.

This happens, not because there's anything wrong with gold at such times, but because gold is priced in Dollars. Instead of being thought of as a store of value in many investors' minds, gold is viewed as a hedge against weakness in the Dollar.

But what are Dollars priced in?

Nothing, actually. Purchasing power is the underlying reality any "price" for Dollars should get at, but that's hard to measure – and the government can't be trusted to report the truth about this.

Unfortunately, in today's world currencies are valued in many people's minds by their "strength" in foreign exchange markets.

Maybe that's in part because nobody believes inflation statistics anymore.

At any rate, the Dollar is frequently valued in relation to its main competitor for reserve currency status. In other words, to many players in the market, the Dollar is priced in Euros.

So when the Euro gets slammed, the Dollar rises, and this apparent "strength" of the Dollar makes gold seem less attractive as a hedge, and gold sells off. 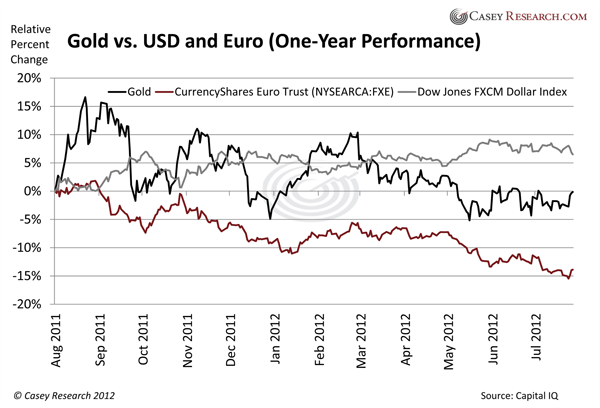 In our view, this set of relationships clearly shows the error of those caught in this trading paradigm.

The Euro is not backed by gold, nor anything at all.

It's a floating abstraction, even more nebulous than the Dollar. Gold is a solid commodity, the ultimate safe haven people all around the world turn to when the acceptance of paper currencies and other assets is in doubt.

There's no valid reason for gold to gain and lose value in concert with the Euro – it's merely an artifice of both gold and the Euro being "not the Dollar."

This point is clearly evident in a longer-term chart of the same variables as above. 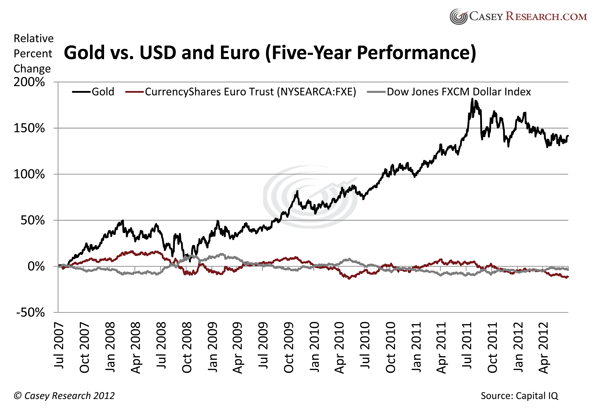 As you can see, while in the short term gold and the Euro seem alike (alternatives to the Dollar), over the long term, the Euro and the Dollar are much more alike, while gold is a beast of an entirely different nature. The Euro and the Dollar take turns winning and losing against each other, but both are being debased, both are losing ground in the real world, and both have lost a lot of ground against gold.

Now, which of these three would you like to trust your savings to?

And which would you like to speculate on, going forward?