END_OF_DOCUMENT_TOKEN_TO_BE_REPLACED

OVER the past month, writes Marin Katusa, chief energy investment strategist at Casey Research, gold prices have seen a considerable decrease, dropping almost 15% since the beginning of May.

If this trend continues, gold will have its first losing year since 2000. This has led many investors, from the housewives of China to the bankers on Wall Street, looking for a bargain in gold prices.

However, what they don't realize is that there is already a bargain available – in uranium. Despite being the source of 20% of electricity in the United States and 35% in the EU, its price remains at multiyear lows. 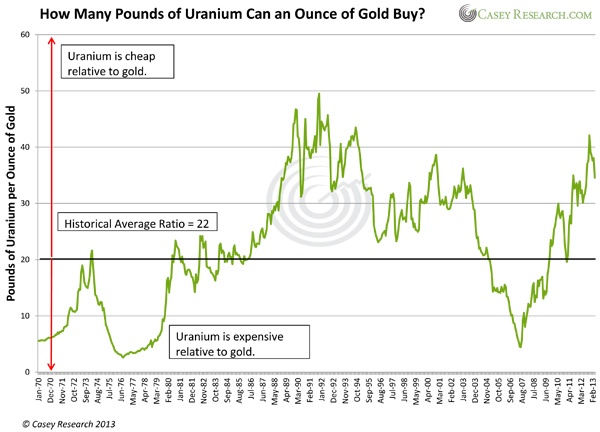 What does this mean? If you consider paper fiat money to be worthless and gold as real money, then the fact that you can buy more of uranium with gold means that uranium is cheap.

Right now, we are clearly in the territory of "uranium is cheap relative to gold prices".

Since these types of ratios have a way of going back to their historical averages, this means that in a gold bull environment, uranium should be set to increase even more.

Still not convinced about uranium? Watch Casey Research's free online video event, The Myth of American Energy Independence, to learn more about the future of nuclear power, energy security in the US, and the uranium sector as a whole.

Some of the most knowledgeable experts in the field, including former US Energy Secretary Spencer Abraham and emeritus chair of the UK Atomic Energy Authority Barbara Thomas Judge, will provide their insights and forecasts for the future of uranium.