END_OF_DOCUMENT_TOKEN_TO_BE_REPLACED

BELIEVE IT OR NOT, there is a plausible path to a $10,000 an ounce Gold Price. And it doesn't require a breakdown in civil society, writes Dan Amoss for the Daily Reckoning.

Speculators see central bankers as modern-day superheroes, able to push markets around with a single phrase. In the minds of most investors, Ben Bernanke, Mario Draghi and Masaaki Shirakawa might as well be wearing tights, masks and capes. These superhero central bankers continuously swoop down into the financial markets to defend them from downticks...and to insure that they always deliver capital gains.

The reality, of course, is that these superheroes are frauds. They have no superpowers...other than the power of mass delusion. The powers of Mario Draghi and the other central bankers in Europe are waning. Excess debt is like kryptonite: Each new wave of printing has less impact on markets. As the popular phrase goes: "This is a solvency problem, not a liquidity problem."

In other words, new money supply cannot restore health to sick loans and government bonds. The only way to restore solvency to the system is to deflate the economy or slash the amount of debt in the system through mass bankruptcy.

Or is there another way? Is there a "reset button" that central bankers can push (with the approval of political leaders) that would restore balance to the system?

We know central bankers would never want to deflate the economy or crash the value of debt, which would destroy the banking system. So how about inflating the money supply to dilute the value of debt? All in one fell swoop?

Right now, central bankers are diluting the value of debt very slowly by pushing interest rates below the rate of inflation. Some call this "financial repression." It's an unspoken policy that has many negative consequences. What is an alternative, since all attempts to "fix" the current system with more borrowing and printing are failing?

How about the classical gold standard, which stands out as the least flawed of all the systems we've tried. Each nation could choose to peg its local currency to gold at a price that allows for enough growth in bank reserves to greatly reduce the burden of public- and private-sector debts.

Re-pegging a currency like the US Dollar to gold at the current price (about $1,550) has its pitfalls. Most notably, it would not deleverage an overleveraged banking system. But re-pegging the Dollar to something like $10,000 an ounce might do the trick.

Hedge fund managers Lee Quaintance and Paul Brodsky from QB Asset Management wrote a fascinating outline on the potential reintroduction of gold into the monetary system, while simultaneously implementing what one might consider a debt jubilee. QB explains the mechanics of how it could work in the US:

Using the US as an example, the Fed would purchase Treasury's gold at a large and specified premium to its current spot valuation. The higher the price, the more base money would be created and the more public debt would be extinguished. An eight-to-10-fold increase in the Gold Price via this mechanism would fully reserve all existing US Dollar-denominated bank deposits (a full deleveraging of the banking system)."

Below is what the remonetization of gold would look like in chart form. The yellow line would rapidly approach the blue line. And the blue line will keep rising as we see further growth in the money supply. QB's "Shadow Gold Price" divides the US monetary base by official US gold holdings. Policymakers, who always feel the need to manage something, would appreciate that this is the same formula used during the Bretton Woods regime to peg the Dollar at $35 per ounce. In other words, the Shadow Gold Price is the theoretical price of gold after the Fed inflated the supply of Dollars to a level that would cover systemic bank liabilities and then re-pegged the Dollar to gold. Behold the path to $10,000 gold: 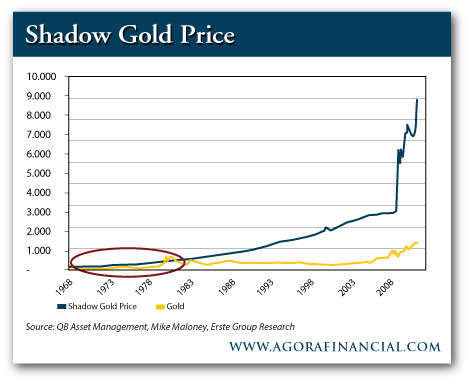 This path would weaken the economy-sapping effects of debt created since President Nixon closed the gold window. It would transform a debt-based currency into an asset-backed currency. No longer would one ask the unpleasant question "What backs the Dollar?" and come away with even more questions (and a headache). Right now, the Dollar is backed by Treasuries held on the Fed's balance sheet, which are in turn backed by Dollars, which are in turn backed by faith in fiat money — i.e., nothing!

QB's monetization scenario would impose losses on certain parties as the reset button is hit, but unlike most of the policy prescriptions we've seen lately, it seems to solve more problems than it creates. Most notably, politicians could argue that this reset would involve "migration of value, in real terms, from leveraged assets to unleveraged goods, services and assets." Wage earners would be winners relative to asset owners, because "stable to higher nominal asset prices would require even higher nominal wage and consumable pricing looking forward."

This scenario argues for holding some shares in producers of physical commodities (especially gold miners), even if it feels like we're in a deflationary environment. A gold standard, after a one-time debt monetization, would make for a more-balanced, efficient global economy less prone to violent booms and busts.

We can hope the central bankers of the world stumble their way to a solution like that proposed by QB Asset Management before they inflict even more damage to the foundation of the global economy. Unfortunately, conditions may have to get much worse in financial markets, banking systems and economies before such "outside the box" ideas are considered. A defensive portfolio with exposure to gold and other real assets seems like the right mix in today's environment.

[Ed note: for a discussion on the gold standard – as well as information on an "insurance policy" for your savings – check out this episode of Radio 4's Analysis program]

Buying Gold? Get the lowest prices possible by going to BullionVault...