END_OF_DOCUMENT_TOKEN_TO_BE_REPLACED

15 years after BullionVault's 1st ever trade...
IMAGINE buying 4 grams of gold for just £7.29 per gram, writes Adrian Ash at BullionVault.
That's a mere €10.65 for Euro investors...
...equal to just $425 per Troy ounce in US Dollars.
That was how much BullionVault's first public customer paid in mid-April 2005...
...testing our service with what turned out to be a small deposit, before transferring more cash to buy more gold.
It looks a very smart move today.
Compared to 15 years ago, the yellow metal has now risen 4 times over in US Dollar terms...
...5 times higher in the Euro...
...and a massive 7 times higher for UK investors and savers.
BullionVault has meantime become the No.1 service for private investors wanting to own securely stored precious metals...
...enabling more than 83,000 people from 175 countries to enjoy the savings, security and deep liquidity of the professional bullion market from as little as 1 gram at a time.
We were supposed to be hosting a small party this Thursday to mark BullionVault's 15th birthday.
But no one outside West London can get anywhere near Hammersmith, and we can't meet or greet each other anyway, and no one feels much like celebrating.
Postponing our party 'til happier times, we will have make do with a quick "Cheers!" on Zoom...gawping no doubt at the choice of wallpaper and junk piled up in each other's spare rooms.
Gold keeps raising eyebrows too.
Last week it marked St.George's Day by topping €1600 an ounce for Euro investors...
...and it topped £1400 an ounce for UK investors...
...a massve 20% higher for 2020 so far.
Too much, too fast? Or way too much across far too long? 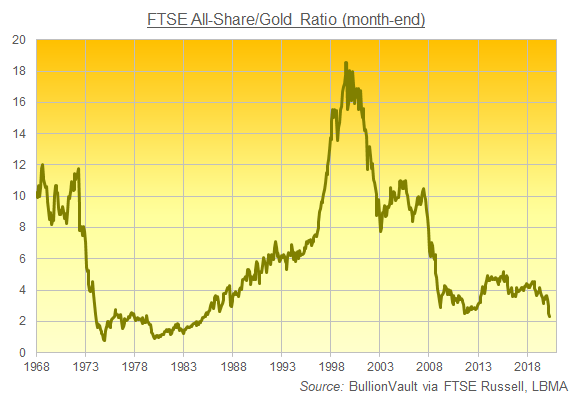 The best-performing asset of the 21st Century so far, gold has outrun stock markets across the world since April 2005.
New York's Dow Jones Industrial Average, for instance, has lost almost half its value when you price it in gold.
And as our chart shows, gold has really crushed the value of UK equities...
...squashing the price of the FTSE All Share index by four-fifths.
Clearly, any new investor buying gold today will wish they bought sooner.
Some of those already in gold might think it's time to get out.
I mean, how much lower can the stock market drop when priced in gold?
Isn't this time to swap back...selling metal and buying shares?
Very possibly, yes.
Dividing one by the other, the FTSE All-Share index has sunk from 8.6 ounces of gold in April 2005 to just 2.3 ounces today.
Put another way, gold has become nearly 4 times more valuable in terms of listed corporate assets.
So if you sold shares and bought gold in April 2005, then good for you. Because you can now buy almost 4 times as much UK equity with your metal.
But what if you miss the final move? What if the FTAS index sinks to its record low against gold...
...dropping to just 0.75 ounces...
...as it did amid the Oil Crisis collapse of 1973-74...?
That would see gold rise almost 3-fold further in terms of UK equity.
And from there, nothing says the historic low can't blow out either.
I mean, just look at oil. 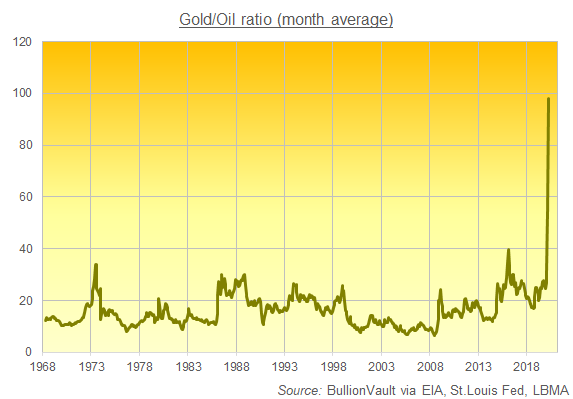 Priced in cash, US crude oil actually went negative last week.
Put another way, producers were paying people to take the stuff away, albeit for a few hours.
Partly that was because of how the futures market works. But mostly it was because crude oil is highly useful, vital indeed to our commercial and economic life.
And that life is on pause right now.
Hence the collapse in oil demand. Hence the glut of crude...the lack of spare storage space...and the dozens of massive tankers floating off Southern California, stock full of oil with nowhere to go.
Gold, in contrast, is pretty much useless for anything but storing wealth. And while London and Zurich's vaults are also filling up, that's because people actually want and are buying the stuff...not because they are refusing it. Quite the opposite.
Tracking this move from useful to useless, how many barrels of crude oil could you get for 1 ounce of gold?
Prior to March 2020, the Gold/Oil Ratio averaged 14 barrels per ounce. Over the last 5 decades or so, it moved between 7 at gold's lowest to 40 at its dearest.
Then all of a sudden it jumped to new highs. Last month it averaged 55...
...and so far in April the Gold/Oil ratio stands at 98.
Mid-April's negative values confuse things a bit. But all-time highs and lows exist to be broken.
Who ever thought crude oil would go negative? Who ever imagined a catastrophe quite like Covid-19...?
BullionVault wasn't built on any such foresight. It was created simply because adding a little gold to your investments looked a wise move. It still does.
Because by owning physical bullion at very low cost, outright and off-risk for anyone else's financial performance...with instant access to selling for full value 24/7 from wherever you are...you can spread your risk and rebalance your gold, alongside your other assets, every so often.
That might not protect your savings from anything and everything the world throws at your money. But diversifying with a little gold should mean you don't have to try so hard at guessing what the future will bring.