END_OF_DOCUMENT_TOKEN_TO_BE_REPLACED

I SPENT the back end of last week at the New Orleans Investment Conference, talking with investors, mining companies and analysts about the state of the gold industry, writes Frank Holmes, chief investment officer of US Global Investors, writing in Bill Bonner's Daily Reckoning.

The annual conference falls at an interesting time of the year, as the Gold Price typically corrects in October.

In fact, going back 30 years, the historical seasonality of gold has been to rise during September, with a subsequent correction in October.

This year, gold has followed this historical trend, with the metal climbing throughout the month of September to reach a high of $1,790 an ounce on October 4, only to have a normal correction to $1,701 by October 24. This decline typically comes ahead of the Love Trade fueling demand prior to the Hindu festival of lights, Diwali, which begins in November.

At the conference, I've been discussing the multiple forces squeezing the profits and earnings out of Gold Mining companies, causing equity investors to become the Rod Tidwells of the gold world, getting miners energized to "Show me the money!"

In my opinion, this phenomenon highlights the importance of selectively choosing among those gold companies that exhibit the best relative growth and momentum characteristics to help obtain outstanding investment results. 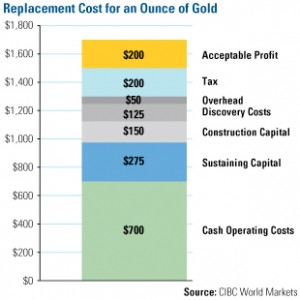 My workshop presentation in "The Big Easy" integrated preeminent thinking from multiple gold experts, including research firm CIBC, Gold Fields and the World Gold Council, about how gold companies' performance has been neither "big" nor "easy." There's been a decline in production per share, an 80 percent increase in the average cost per ton of gold over the past six years, and a 21 percent decline in global average grades of gold since 2005. Cash taxes per ounce of production have increased dramatically, and, according to CIBC World Markets, the replacement cost for an ounce of gold is now $1,500, with $1,700 as a sustainable number. Cash operating costs eat away the most, at $700 an ounce, while sustaining capital, construction capital, discovery costs, overhead and taxes eat up $800. At the October 24 Gold Price of $1,700 an ounce, only $200 is left over as profit, says CIBC.

Gold companies have had their share of challenges in the past. Prior to the huge run-up in Gold Prices in the late 1970s, forward price-to-cash flow ratios crashed from a high of about 22 times to just under 9 times. Eventually, as gold climbed to its high, multiples spiked back up to 21 times. 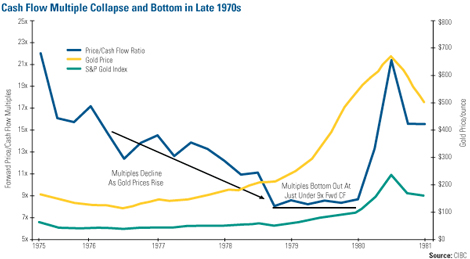 Miners also didn't increase the supply of the precious metal in the 1970s. Back then, there were only a few major players in the gold game. South Africa was a significant gold-producing country, as well as Russia and North America.

However, following years of a gold bull market in the 1970s, production climbed. In fact, Pierre Lassonde, chairman of Franco-Nevada and a living legend in the mining and resource world, says it took seven years for the gold industry to respond after the rise in the price of gold. Ironically, as the price kept falling over the next 20 years, production doubled, says Lassonde. 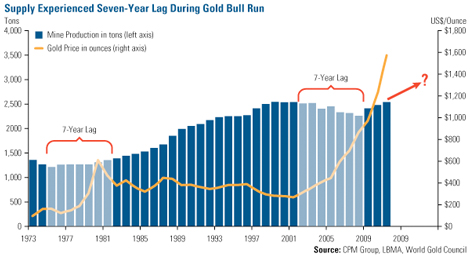 Beginning in 2000, gold companies have experienced a similar phenomenon, with production remaining flat, even declining in some years. In 2008, mine supply of gold fell to levels not seen since the early 1990s.

Now, after a seven-year lag, the industry has responded as we're beginning to see some growth in supply.

From 2006 through 2011, production throughout the entire gold industry has increased about 3 percent, says CEO Nick Holland of Gold Fields. During his keynote presentation at the Melbourne Mining Club in July, he indicated that most of the growth was not coming from the major producers. In more mature markets, such as South Africa, Australia, Peru and the US, annual production decreased by about 5 million ounces since 2006. Emerging markets on the other hand—China, Colombia, Mexico and Russia—added about 7.6 million ounces over the last six years, Holland says.

Of gold finds that contain at least 2 million ounces of gold, research from the Metals Economics Group (MEG) finds that there have been 99 significant discoveries between 1997 and 2011. Only 14 of the 26 major gold producers made these major gold discoveries. "Today, the major producers and their majority-owned subsidiaries hold 39 percent of the reserves and resources in the 99 significant discoveries made in the past 15 years." This amounts to less than half of the yellow metal needed to replace the gold companies' production from 2002 to 2011, says MEG.

According to Lassonde, this is the "elephant in the room," as new finds have become elusive. The chart below from CIBC shows that there was only one major discovery that was more than 3 million ounces in 2011. Over the past seven years, there have been only nine major discoveries of gold.

Lassonde doesn't think we have hit "peak gold," but believes the gold industry needs a "3D seismic" event similar to what occurred in the oil industry before we see considerable finds.

For as many challenges as gold companies face today, they have rarely experienced such a well-diversified consumer base and diversified demand for their product: It's "the best we could ask for," says Lassonde.

A newer trend that I've discussed is the reemergence of emerging markets central banks as buyers of gold, as they have been "relearning that all paper currencies are suspect," says Lassonde. Today, he says "cash is trash," with the value of Euro, Dollar and yen in question.

He believes this source of demand could be long-lasting and quite significant if you look at emerging market countries' gold holdings as a percent of total reserves. In 2000, the European Central Bank decided that the right proportion of gold to own should be 15 percent. Pierre says if you apply that figure to the potential gold holdings of the emerging market central banks, they would need to accumulate 17,000 tons of gold. At a purchase of 1,000 tons a year (or about 40 percent of today's production), these central banks would have to Buy Gold for the next 17 years! 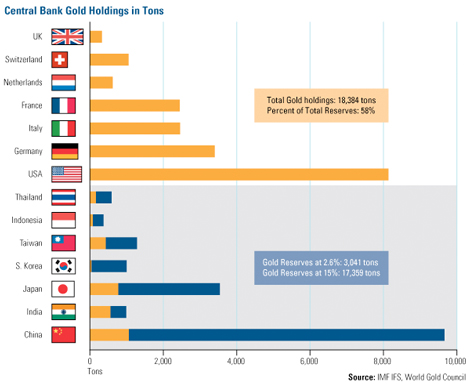 Another growing source of demand has been from the Fear Trade's scooping up of gold exchange-traded funds (ETFs). Eight years after the products were launched, 12 gold ETFs and eight other similar investments are valued at around $120 billion and hold 2,500 tons of gold, says Nick Holland.

I believe the Fear Trade will continue buying not only gold but also gold stocks, as the group is driven by Helicopter Ben's quantitative easing program.

In the latest Weldon's Money Monitor, Greg Weldon discusses the consequences of the Federal Reserve's debt monetization and liquidity provisions, showing the "somewhat frightening pace" of expansion in money supply.

Weldon says that over the last four years since August 2008, the US Narrow Money Supply, or M1, which is physical money such as coins, currency and deposits, has increased 73 percent, or more than one trillion Dollars. This is about as much as it expanded in the previous forty years! 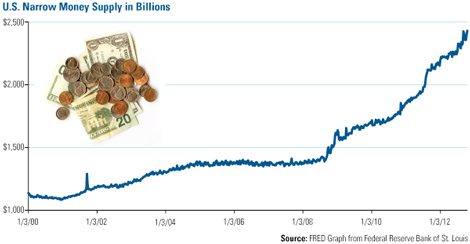 The dramatic increase in money suggests that monetary debasement will continue, and in addition to all the above drivers, I believe these are the positive dynamics driving higher Gold Prices and gold stocks.