END_OF_DOCUMENT_TOKEN_TO_BE_REPLACED

"I SPENT 40 years in the gold market. That's all I've done with my life," Pierre Lassonde told the assembled audience at Grant's Fall Investment Conference. "I think I know a thing or two about gold."

Our host Jim Grant introduced him as one of the few moneymakers in the gold sector. Lassonde is a co-founder of Franco-Nevada Mining, and he sits on the board of New Gold (NGD), writes Chris Mayer for the Daily Reckoning.

Much of what he had to say was what you'd expect a gold bull to say. But there were a few things that I thought were particularly interesting and perhaps things you haven't considered.

For example, analyst forecasts on gold have been wrong for years. And they've been wrong always in the same direction — too low!

On that score, Lassonde shared the chart below. The way to read this chart is to start on the far left. That first line, the lowest line, is a plot of the 2007 forecasts. You can see analysts projected a Gold Price of less than $600 an ounce by 2012. The next line up, which begins in 2008, is a plot of the 2008 predictions. Same thing. You can see the predicted Gold Price was under $800 an ounce. In each set of predictions, analysts not only forecast Gold Prices too low, but they forecast Gold Prices to decline a few years out. 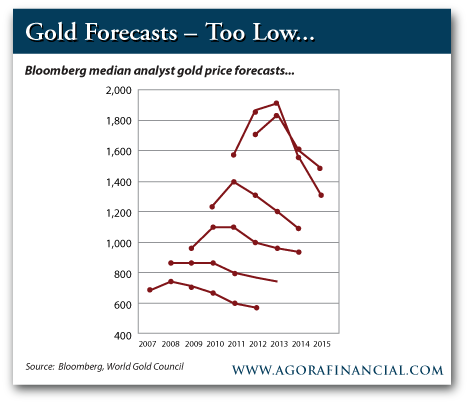 And so on through the years. The top line plots the forecasts made today in 2012. What's most interesting about this is the steep dive the price of gold takes after 2013. Basically, the market consensus is that Gold Prices are going to fall beginning in 2014.

So if the consensus is wrong — as it consistently has been — then you stand to make a lot of money taking the opposite view.

A consensus like this is more important than you might think. All these same analysts derive the valuations on the Gold Mining stocks they cover by referencing some "price deck" (as they say in the trade). The market often takes its cues from these analysts. Hence, those big moves up and down on a day some analyst upgrades or downgrades a stock. So if the analysts are using Gold Prices that are too low to value gold stocks, then the market values of those gold stocks will prove way too low.

Another nugget from Lassonde came on the heels of a prior speaker's comment — it was Bruce Kovner of Caxton, one of the best hedge fund managers around — that the Gold Price could tank if the Fed backed off its QE stimulus plans. Lassonde cut right to heart of why this was so much weak beer.

"What I find interesting in coming to the US is the views of gold are very US-centric," Lassonde said. "I spend three months per year in Europe. I've lived in Canada and tour the world on a regular basis. I want to give you a more worldly view of the gold market."

So the great bulk of new gold buying is coming out of the two Asian giants. That puts Kovner's remark in the shade. As Lassonde said, "Don't think that the fiscal and economic policies of the US will have everything to do with the gold market. China and India will have a heck of a lot more to do with what happens in the gold market than Washington."

Another great chart from Lassonde shows how the world's central banks are now buyers, instead of sellers, of gold. Take a look: 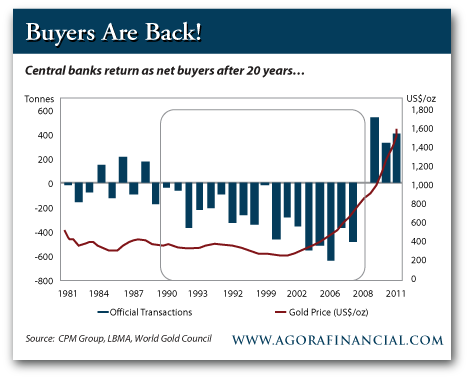 I think these are some compelling points in favor of gold. If you are bullish on gold, then you might think, naturally, that you ought to buy gold stocks. So what about gold stocks?

"If you've been in gold equities the last seven or eight years, you've probably not had a great ride," Lassonde said. "You've either marked time or lost money altogether. You would've made more money buying the gold ETF [exchange-traded fund, like GLD]."

Why have gold stocks proven such a lousy place to put money? There are lots of reasons, most having to do with the deteriorating economics of mining the stuff.

New finds are proving increasingly elusive. New gold mines are smaller and have lower grades — meaning you have to chew through more rock to produce a given ounce of gold. New mines are more expensive to mine and take longer to bring into production.

In essence, gold assets are of lower quality — and getting lower. The technology hasn't changed much in 30 years. Nothing like what has happened to oil and gas has happened in the gold sector. Lastly, governments are more rapacious, taking more in taxes.

All of these things translate into less economic assets and poor stockholder returns. I don't think this is widely appreciated by those who speculate in gold stocks. You're really better off just buying the metal. At least that's been the way it has been for the last seven years or so.

Having said that, I know you may well enjoy speculating on gold stocks for a big return with full knowledge of the risks involved. And not every deposit is an economic disaster area. Lassonde himself has made a lot of money investing in gold stocks. Just know that the odds are stacked against you even as the price of gold moves higher.

How much higher? It's anybody's guess. Lassonde guesses gold will hit $13,000 an ounce over the 10 years before the party ends. There is a lot of space between today's $1,700 an ounce price and Lassonde's guess.

Let's hope Lassonde is wrong if only because a world where gold is $13,000 an ounce is apt to be unpleasant in many other respects. But better own some of the shiny metal just in case.

Have a great holiday weekend.