END_OF_DOCUMENT_TOKEN_TO_BE_REPLACED

As the West flees from gold, Chinese buyers are stampeding in...
HOVERING around $1200 at the beginning of July, the gold price has completely disconnected from the precious metal's fundamentals, in my opinion, writes Frank Holmes of US Global Investors.
Gold prices have fallen too far out of fear, but the drivers for gold are still in place.
My friend and highly respected analyst, Gregory Weldon, highlighted an important point about rising rates in the US. The coupon on the nation's $13.22 trillion debt averages 1.88% with an average maturity of 5.4 years. As interest rates rise, debt will be rolled over at a higher rate, making the burden even greater than it already is.
This suggests a likely tipping point for Treasuries. Will the Federal Reserve suppress yields at that "line in the sand?" 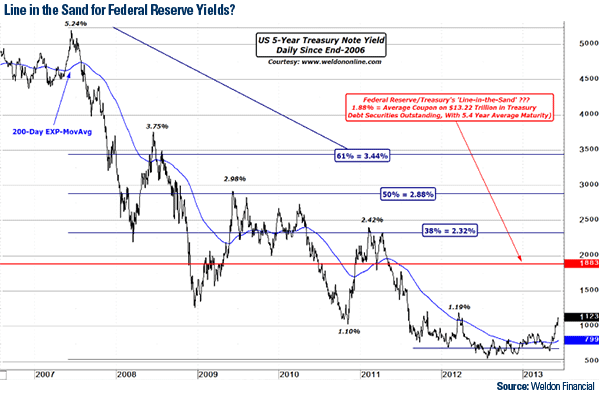 In this environment, gold should remain attractive. However, as the West flees the precious metal, another set of gold buyers has come forward with the aim to preserve wealth.
Take a look at the chart below which shows total gold production compared to the gold deliveries on the Comex and the Shanghai Gold Exchange. In May, gold imports into the Asian giant rose to the second-highest level ever. While mining production is around 1,134 tonnes so far this year, gold delivery on the Shanghai Gold Exchange is 918 tonnes. This is strikingly in contrast to the gold delivery on the Comex, which stands at only 103 tonnes year-to-date as of the end of May. 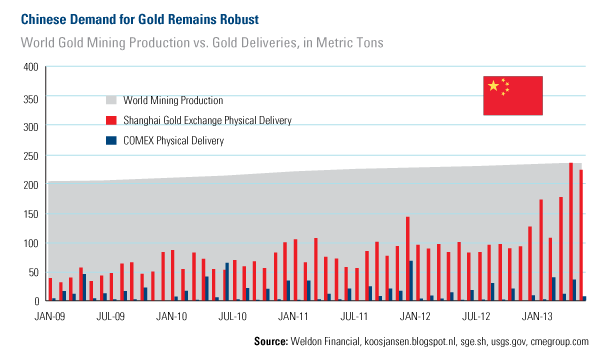 In fact, this year's demand is so significant that the physical gold delivered on the Shanghai Gold Exchange through May is almost all of the official gold reserves in China!

"Annualizing 2013 year-to-date figures," as George Topping of Stifel Nicolaus puts it, "China's imports would be equivalent to 50% of [world] mine production."

China may be devouring even more of the supply in the future if the price of gold remains subdued. I've been talking with several gold company executives, who tell me they are seeing squeezed margins because of lower grade finds, as well as governments raising taxes or increasing royalty rates.
The top priority for these miners today is cost control, focusing their efforts on viable projects that have all-in costs of less than $1000 per ounce of gold. If spending is too expensive, exploration is cut and production is halted.
This is an extremely conservative amount, as some gold mining projects in certain countries come in significantly higher. The CEO of Gold Fields recently indicated that the average all-in cost in Africa is $1500!
This is a similar phenomenon to the supply of natural gas recently. When there were huge discoveries in the commodity, companies immediately halted drilling. There's a notable difference in drilling gas versus mining gold, though.
The natural gas cycle is shorter and measured in months, so there can be a relatively quick recovery in supply. When gold companies cut production, the restart cycle can take decades.
To me, these supply and demand drivers point to a sustained higher gold price.